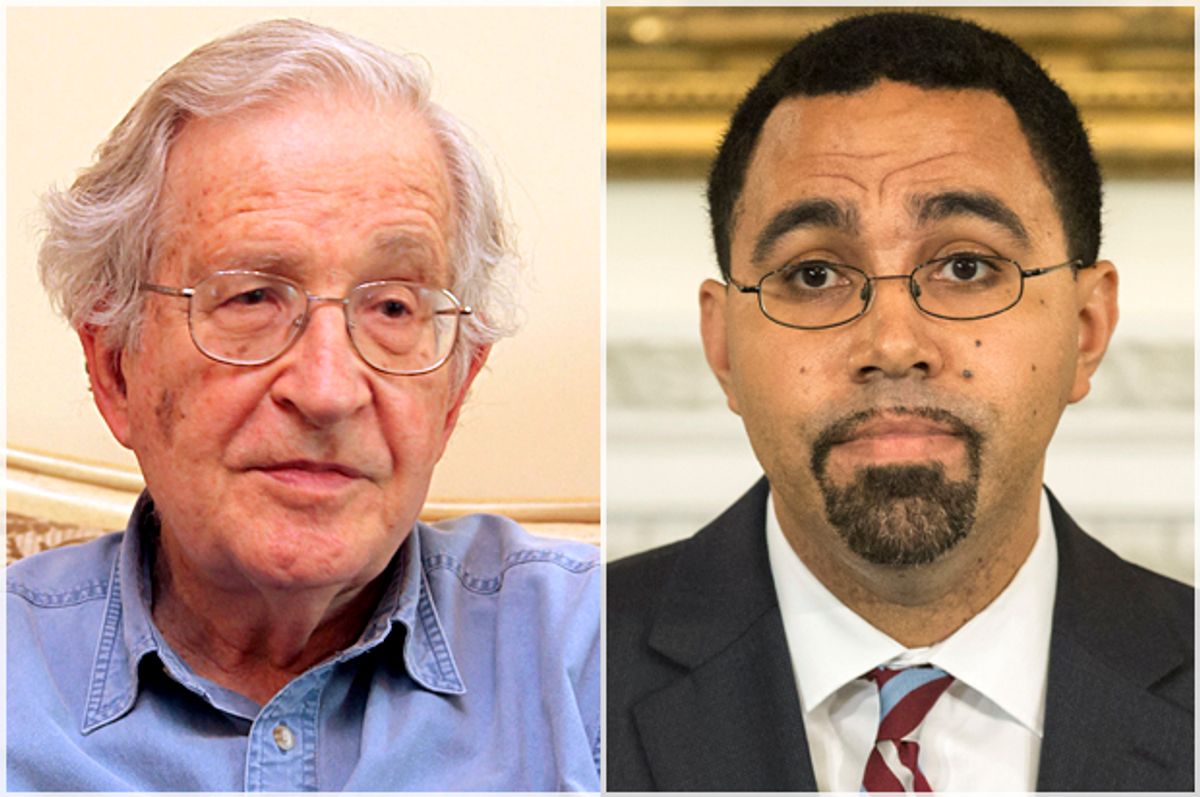 Leading progressive voices are warning that President Obama's choice for education secretary could be a disaster.

An open letter to the U.S. Senate, published in the Washington Post on Thursday, asks lawmakers to reject the confirmation of John King as the new secretary of education.

King, the acting secretary of education, has a long history of supporting corporate-friendly education reforms, and has pushed for unpopular policies like more standardized testing and Common Core, which critics say are ineffective.

The letter is signed by world-renowned scholar Noam Chomsky, along with journalist Naomi Klein, Chicago Teachers Union president Karen Lewis, Green Party presidential candidate Jill Stein and a host of other prominent scholars and activists, including some of the most established pro-public education voices.

A variety of teachers' and public education organizations signed the letter as well, including New York for Public Education, Save Our Schools and Time Out From Testing.

The signatories warn King's policies "have been ineffective and destructive to schools, educators, and most importantly students."

"The American public deserves a Secretary of Education who will advocate for their interests, not those of the testing corporations who profit from the Common Core," the letter reads.

As former education commissioner for New York state, King strongly supported Common Core and inBloom, an organization that collected sensitive private information of students (inBloom has since been shut down).

In fact, King's push for Common Core and standardizing testing designed by the corporate education giant Pearson — which has been widely criticized for putting profit over effective policy — "was considered such a disaster that New York. Gov Andrew Cuomo wrote in a letter to top state education officials that 'Common Core’s implementation in New York has been flawed and mismanaged from the start,'" the Post reports.

Because of King's policies, 20 percent of test-takers across New York refused to take the tests in protest.

King stepped down from the position in December 2014, after years of protests, and moved to D.C. to serve under Education Secretary Arne Duncan. When Duncan stepped down in late 2015, King was next in line.

The signatories of the open letter, which is included below, insists King "is the wrong choice for the position."

"His policies failed," the scholars, educators and activists say.

Journalist and author Nikhil Goyal wrote much of the letter, along with Carol Burris, a former New York high school principal who now leads the Network for Public Education Fund.

Although a mere 20 years old, Goyal has quickly established himself as a leading voice on education in the U.S. He just released his second book, "Schools on Trial: How Freedom and Creativity Can Fix Our Educational Malpractice," and has appeared in a slew of media outlets, along with Forbes' 30 Under 30 list.

Goyal recently wrote a piece for Salon detailing why "corporate-education reformer John King is exactly the wrong man to be secretary of education."

Salon reached out to Goyal for further comment on the letter and Acting Secretary King.

"The U.S. Senate should not confirm John King, a man who will bring the failed policies he pursued as education commissioner of New York State to the entire nation," Goyal stressed.

"This letter is yet another sign of the growing resistance in the United States against corporate, neoliberal reform — school closures, standardized testing, and Common Core standards," he added.

Goyal said he and fellow education activists are urging Sens. Bernie Sanders and Elizabeth Warren, in particular, to pressure President Obama to nominate someone else. Sanders and Warren are the two progressive members of the Senate's education committee.

"King is one of the leading figures of the corporate school reform movement. Arguably, his agenda is just as terrible and oppressive as the former Secretary Arne Duncan," Goyal told Salon.

"This country needs a secretary of education who will help bring some sanity into our classrooms, not a lackey of the corporate machine."

As educators, students, parents, and activists, we are writing to strongly urge you to reject the confirmation of John King, President Obama’s nominee for the Secretary of Education. We believe he is the wrong choice for the position.

Research and evidence demonstrate that the education policies that John King has supported throughout his career, such as the Common Core standards, the collection of private student information, and high-stakes standardized testing, have been ineffective and destructive to schools, educators, and most importantly students.

As New York State Education Commissioner, he was an unapologetic supporter of the Common Core standards and inBloom. His policies failed. While test scores are flawed metrics, in 2013, just 31 percent of students in New York passed the English and math standardized tests, the first tests to be aligned to the Common Core and in three years the scores have barely budged. The achievement gap grew. Last year, over 200,000 students opted out of the tests.

Educators, parents, and students as well as the state teachers union and other public education advocacy groups called for King’s resignation. His style is inflexible and he is quick to criticize the motives of those with whom he disagrees. He persistently refused to consider the desperate pleas of students and teachers who were reporting that the Common Core and value-added teacher evaluations were not working.

The American public deserves a Secretary of Education who will advocate for their interests, not those of the testing corporations who profit from the Common Core. We also deserve a Secretary who respects the importance of schools governed by communities, not by federal mandate.

Senators should not be misled by vague promises to do better as King offered at a recent hearing. John King is the wrong candidate and he will follow the failed strategies of Mr. Duncan. We strongly urge you to reject his nomination and recommend to President Obama that he nominate a candidate who will bring a progressive perspective to the department as it implements the Every Student Succeeds Act.

Nikhil Goyal, Author of the book Schools On Trial and Forbes 30 Under 30 honoree

Jeanette Deutermann, Founder of Long Island Opt Out and parent

Carol Burris, Executive Director of the Network for Public Education

The Network for Public Education

Time Out From Testing

The Opt Out Florida Network

Teaching, Not Testing: A New Narrative for Education