Farewell to my face: I'm middle-aged and I look it — but don't ask me to like it 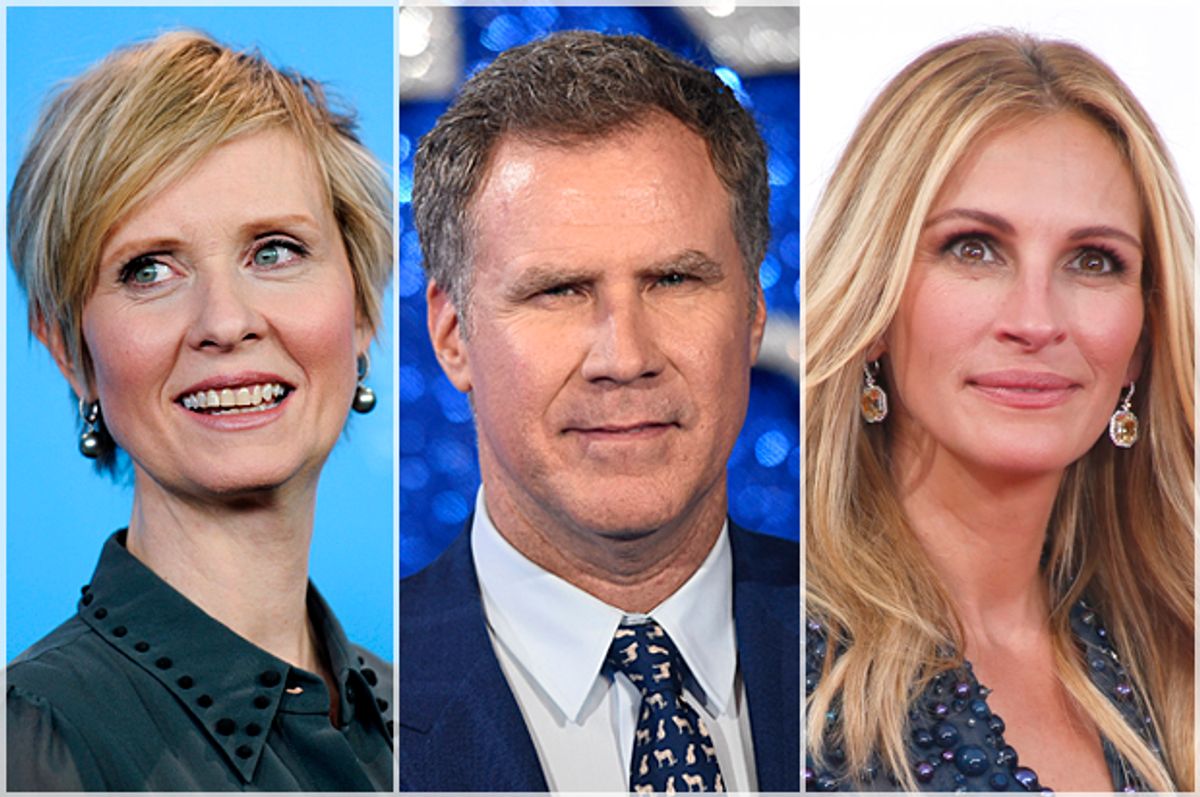 A couple of years ago, my teenage daughter took my photograph on our front stoop, and the pictures showed a diagonal gash running down and out along either side of my nose. “The light’s bad out here,” I said, so we moved to the patio. She snapped more pictures. The gashes were still there. I rotated 90 degrees. Still there. I think you know where this is going.

I’d heard of this happening to other people. “That’s around when she started losing her looks,” I remember an old boyfriend saying about Mary Tyler Moore while watching a rerun from the third season of her show. Heeding my mother’s advice, from the time I was 30 onward I purchased and used eye cream—my one concession to the sketchy age-defying-cosmetics industry—but that felt like superfluous insurance given the coup of genetics that seemed to be my birthright. I’d been telling everyone for years—literally decades—that I would age splendidly by virtue of the fact that my paternal grandmother had aged splendidly, and didn’t everyone say that I look just like my dad? “Is that your daughter or your granddaughter?” a stranger in line with us at the grocery store asked Teta when she was long a Miami retiree. And we’d all heard (because she told us) that Teta had been challenged at some AARP event because one look at her told the gatekeepers that she wasn’t old enough—except she was.

How could this—this pole vault from one side of middle age to the other, right there on my patio—be happening when I felt so young? When someone asks me how old I am, my first thought is always “Twenty-six,” and then I have to pause and recalibrate until I get to the correct number: 48, currently. True, I dye my hair, but I’m not yet menopausal—“Still very much menstrual, thank you,” as "Ab Fab’s" Edina Monsoon would tell you—so I wasn’t ready to look middle-aged. But now that I think about it, there’s the suggestion that I saw it coming. You should get a load of the pictures that a photographer friend took to promote my book three years ago. In nearly each of several dozen shots, I’m making the face that I’ve seen women and men of a certain age make—a variation on Blue Steel, without quite so much eyebrow: a slight pucker in order to grow instant cheekbones and to suggest the precipice of smiling without actually smiling, because as everyone knows, smiling means wrinkles around the eyes. (You knew that, right?) I’ve since caught others assuming this face—a realtor neighbor who emails me her newsletter straps it on. I think I even caught the formidable Katrina vanden Heuvel doing it in the pages of the Nation.

Unlike Katrina vanden Heuvel, I was never truly beautiful; what I had going for and against me was outsize features. (Having ancestors from the Middle East will do that to you.) My features are all a reasonable number of millimeters away from one another—random geometric luck, as I remember the model Paulina Porizkova describing it with semi-heroic humility. I do have a dud feature—a big, right-triangular nose—but I can view it only in profile, which requires some maneuvering of bathroom mirrors; I’m not a masochist nor especially dexterous, so I have done this rarely. Hence I grew up with a false sense of dud-feature-lessness, which probably led to an overestimation of my physical attractiveness, which worked for me, if finding myself consistently paired with good-looking guys is any gauge.

None of this should matter now: I’ve been married for 15 years, so I’m no longer fishing; who cares if I have shitty bait? Self-servingly, I think Joan Didion is correct when she says that to our lifelong mates, our faces are frozen in time as they were when we met. (A few years ago I described my husband to someone as having black hair, only to have it pointed out that, actually, it’s gray.) So why am I devastated by the loss of my former face? Because it hurts to know that I’ve permanently lost something from my arsenal: it’s no longer rational to imagine myself on the receiving end of the movie cliché in which someone lays eyes on someone for the first time and is undone. I have the feeling of having been robbed of a superpower: I have lost the power to turn a stranger’s head.

It happened in slow motion right before my eyes a few months ago. I had been corresponding with a 30-ish filmmaker by email, and when my husband and I met him in person a few days later, I saw something in the guy’s face, by which I mean I saw exactly nothing in the guy’s face: an utter lack of registration of anything other than “human animal” when he saw me. (Yes, I’m pretty sure he’s straight.) This didn’t used to happen. And there’s nothing I can do about it. Even the sudden onset of stupendous wealth couldn’t save the day: the best that even Marlo Thomas can achieve is a face that—forgive me, dear Marlo—looks pinched and pulled, like a taffy mask. That is not necessarily better than looking one’s age.

I can usually find a gender issue in a haystack made up entirely of non-gendered issues, but for me, mourning my former face is not a feminist issue: to me, men my age are looking just as knackered as women my age are. And I notice that when my head swivels in admiration, it’s always in the direction of a guy who looks 30 or younger. I had a scare once: some years back, at a reading given by the New Yorker’s Bob Mankoff, who told us he was nearly 70, I found myself deeply attracted to him. I was seized with despair at the wrongness of this—would a straight middle-aged guy’s eyes turn into pinwheels at the sight of a pushing-70 female New Yorker editor?—until I realized that, tall and skinny, with glasses and center-parted flappy gray hair, Mankoff looks exactly like my husband. (Meaning my husband in 20 years.) So it’s not a feminist issue: It’s a shallowness issue. That’s a relief.

For a year or so now I’ve been doing a Will Ferrell Watch: He’s almost exactly a month older than I am, and I figure that when he’s looking long in the tooth, I must be too. (Surely one of the reasons agents have their clients photographed as often as possible is to minimize the chance of shocking the public with what would seem to be an aged-overnight face.) And I’ve grown dogged—fiendish, even—about sizing up famous people who are approximately my age. Julia Roberts—I have two months on her. How’s she holding up? That middle-aged talking head I saw on "Charlie Rose" the other night—I’ve since forgotten his name; that’s not the point—looked uncontroversially older than I am. But I Wikipedia’d him, and guess what? I have two years on him. I just saw a recent photo of the dapper actor Robert Sean Leonard, and I would have bet a kidney that he had a year on me: in that photo, he looks just like a dad. (Is there a look that screams “middle age” any louder?) But no: I’m a year and a half older. And get this: for the entire run of "The Brady Bunch," the grandmotherly Ann B. Davis, who played Alice the housekeeper, was younger than I am now. That makes me potentially too old for Sam the butcher. Revelations like this require some uplift in the form of thoughts about actors a bit older than I am whose faces persist at their job of looking good: Robin Wright, Michael K. Williams, Cynthia Nixon, Benicio del Toro. That means there’s hope for me. Right?

You may be pleased to learn that Teta, who did eventually lose her looks, lived to be 99, and toward the end of her life she was known to say, “Every day is a day against me.” She was referring to her health—her hearing was shot, her agility wasn’t what it once was—but her slogan is true for one’s looks as well. Maybe good-looking people just seem to age better than others do, just as I’ve always suspected that “photogenic” people are just people who are better looking than the rest of us, including when they’re not being photographed. Aging seems to be life’s one truly democratically administered cruelty. What feels like unfairness to me right now may in fact be the ultimate in fairness: time, that bastard, ticks away at the same rate for each of us.

If you’re expecting me to end this essay on an uplifting note—“I’ve come to appreciate my inevitably middle-aged face, which shows proof of hard-won wisdom and a well-lived life”—you can forget it. I will never not blanch at photographs showing the accents grave and aigu on either side of my nose, not to mention my multi-circumflexed forehead. That’s decrepitude, not character. Fuck that.

Being chagrinned to be visibly aging may not be a feminist issue for me, but what I do with my fretfulness could turn it into one, so I’m being careful. Here’s what I’m going to do: If I’ve learned nothing from Heather Locklear (and who hasn’t learned something from Heather Locklear?), I’ve learned that one should sleep on one’s back to minimize facial slumpiness over time. I’ll continue with the eye cream because otherwise I’d have to admit that it probably hasn’t worked and that I’m hundreds of dollars poorer with nothing to show for it. I could do as Candice Bergen suggests and gain some weight, which would seem to have the effect of filling in facial crevices, but I don’t like food all that much. I could grow bangs to cover the parallel bars in my forehead, but I’ve tried bangs before, and I always know exactly what I’ll be doing the day after I get them: growing them out. Do you know what’s the best psychic balm for me? Watching old movies. Did you know that Claire Trevor was younger than I am now when she played Natalie Wood’s mother in "Marjorie Morningstar"? That’s depressing, but at least I have the advantage of not being dead, and I’m sure you agree that dead isn’t a good look.