Hillary's "House of Cards": What Claire and Frank Underwood tell us about marriage, gender and the White House

Political marriages, both real and fictional, are fascinating, especially when ambition and power clash 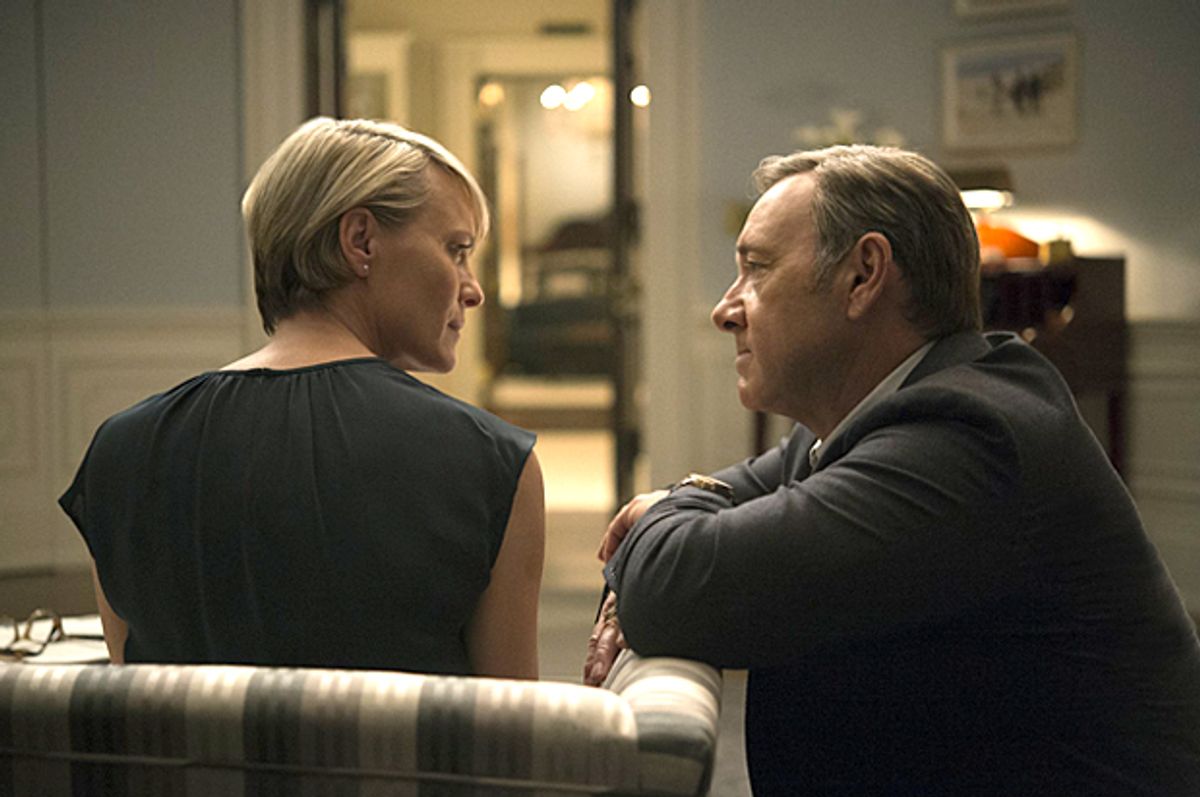 Robin Wright and Kevin Spacey in "House of Cards" (Netflix)
--

We’ve no lack of power couples to examine in the English-speaking world today. Prince William and the princess formerly called Kate Middleton; Kim Kardashian and Kanye West; Beyoncé and Jay Z; President Barack Obama and first lady Michelle. Marriages that are political, professional and personal, uniting two people in ambition, sex and maybe some other stuff, too. But the 2016 election has brought one of the most controversial and fraught power couples in American history back to light, and that is the relationship between President Bill Clinton and Secretary Hillary Clinton, who have been partners in the public eye ever since 1976, just a year after they were married. The couple has straddled the line between American politics’ dated expectations of marriage and the starry-eyed ideals of ‘70s liberalism—both externally and internally; just as the media has struggled with the Clintons’ non-traditional gender roles, infidelity and otherwise seamless professional partnership, the marriage appears to have suffered some bad days as a result of the couple’s various scandals.

I’ve written before about how television has pondered and anticipated the rise of Hillary Clinton’s presidency, by telling the narratives of overlooked or betrayed political wives and theorizing how each might find her own separate peace. But beyond just imagining a female president, as I argued then, much of Hollywood’s storytelling about Hillary Clinton is in fact about plumbing the depths of that presumably fraught and very public relationship between President Bill Clinton and the former secretary of state. Much of the speculation stems from the mystery of not-knowing. In the same way that William Shakespeare speculated on how Antony and Cleopatra felt about each other, and Hilary Mantel wrote about Henry VIII’s inner workings, Hollywood’s politically oriented writers speculate on the private lives of Bill and Hillary Clinton.

For example, in Shonda Rhimes’ “Scandal,” Fitzgerald and Melanie Grant (Tony Goldwyn and Bellamy Young) are plagued by the same thwarted ambition and infidelity that appears to have characterized Bill Clinton’s White House years; in “The Good Wife,” Alicia Florrick (Julianna Margulies) struggles to reconcile her feminism, ambition and intelligence with her role as her husband’s wife-appendage, the woman who stands behind him during speeches.

But there is no rendition of the Clinton presidency that is more pointedly about Bill and Hillary than Netflix’s “House of Cards,” the fourth season of which debuted on Friday. Unlike the characters in nearly every other political drama, the leads of “House of Cards” never really change, or grow, or evolve. It’s politics; the Underwoods have just one drive, and that is to amass power. The Netflix show—its first original scripted drama, and a successful one, based purely on audience conversation about it—has never exactly been good, but its cynical, chilly, dispassionate view of American politics and human relationships feels knowing, at the very least, about the truly craven depths of the human heart.

It didn’t quite start out that way. “House of Cards,” like its British forebear, styled its murderous and ambitious leads Frank (Kevin Spacey) and Claire Underwood (Robin Wright) on “Macbeth,” in which Lady Macbeth’s queenly, surrogate ambition for her husband is the only political ambition available to her. In the original novels, Elizabeth Urquhart (Diane Fletcher, in the miniseries) isn’t a major player in her husband’s schemes until the second and third books, but in the award-winning BBC series, Elizabeth is very involved with her husband’s plots.

The first season of Netflix’s “House of Cards” maps closely with the British version, and in both, it’s the husband’s search for power, in the power couple, that is the duo’s priority. (In the U.S. version, though she does in fact run her clean water initiative, Claire is relegated largely to the role of a wife with a pet charity. It ends up being subordinate to her husband’s quest for a cabinet position.)

As the American show has found its own voice, though, it’s begun to focus on different things. “House of Cards” executive producer David Fincher demonstrated how cynically he views marriage with last year’s “Gone Girl,” his cinematic adaptation of Gillian Flynn’s bestselling novel. With Fincher’s influence, showrunner Beau Willimon incorporates a deep ambiguity about partnership and loyalty with the careful analysis and then breakdown of the Underwood marriage, which becomes the main source of intrigue and conflict throughout seasons two and three. It’s smart; one of the reasons the show is so exhausting to watch is because the Underwoods always win everything, because they are just that good. Pitting them against each other—in small ways at first, but blowing up into big ways by the end of season three—injects a real sense of suspense into the otherwise grim and inevitable proceedings.

The third season ended with Claire walking out on Frank, after a thrilling scene midseason where she told him, at the end of an argument, that she should have never made him president. The fourth season opens with her and Frank maneuvering against each other during the already fraught primary process, as he struggles to stay president after stepping into the office at the end of season two. It is still deeply cynical, but the six episodes I watched have wonderful momentum, a propulsion that the show has lacked since season one.

What comes between the unstoppable Underwoods is simply that Claire is tired of being Frank’s second fiddle. She resents his power, that the world grants to him without recognizing her contribution; she resents that she is relegated to the role of first lady, pushed to manage just place settings and flower arrangements, when what she wants is to broker deals and manipulate power. It’s perfectly understandable. A president cannot be elected, in this era of sexual panic, without a spouse, but the spouse is just an appendage, just a seal of approval. Claire has worked with Frank every step of the way, but in the eyes of the world, she has earned no particular power.

So when even Frank won’t allow her to run for office, she becomes his worst enemy, the queen on the chessboard entrapping the king, and running for office anyway in the meantime. Season four utilizes more fantasy and dream sequences than the show has previously, and those images are very much in the tradition of Fincher’s previous work. In one recurring motif, Frank and Claire fight with each other as if possessed. Claire pulls out a knife and rams it into his gut. Frank wraps his hands around her neck and slams her into a mirror, shattering glass. “Gone Girl” explored how marriage made someone the perfect enemy and the perfect lover; “House of Cards” season four does similar work, making the first several episodes of the season into a tango dance of attempted annihilation.

Claire’s quest for power exposes so many little hypocrisies about not just the role of women in the world, but more specifically, the expected role of the political wife. How she is both held responsible for her husband’s policies and given no credit for them; how her independence is interpreted as his weakness; how she can only strengthen him, but he can only detract from her. Claire is no feminist hero—she is Nietzschean will-to-power made flesh, with no interest in anyone’s cause except her own—but her ascendancy to the heights of power looks like feminism, because her hurdles are so much more blatantly sexist.

It’s impossible not to think of the Clintons when watching the Underwoods. Both couples are seamlessly professional in public; Frank, like Bill, comes from a working-class Southern background, while Claire, like Hillary, had a bit more patrician upbringing. Both are partners in work and in life, often when they should, by all rights, completely hate each other. And both are couples where male privilege meets female resentment; the men rocketed to success, while the women have had to carefully pick their way through political minefields.

At least in one area, Hillary Clinton is entirely unique: She is the only first lady, so far, to leave living in the White House to pursue running for the White House. Her marriage was a source of public amusement and scorn for years, but she decided to stay in it anyway, and direct it back toward political office. “House of Cards’" third season displays some of that same unconventional political decision-making; Frank appoints Claire his ambassador to Russia. In this upcoming season, Claire’s going to get even more ambitious in demanding her fair share of the Underwood empire.

It is captivating. I’m not willing to say that “House of Cards" season four is the best yet, but watching Claire and Frank Underwood fight with each other is what that show, and Spacey and Wright in the main roles, were made to do. There’s an element of lifting behind the curtain to glimpse the worlds of other couples in power, which storytellers have loved to do from Shakespeare to “Scandal.” But it’s also a horrific kind of captivating. The private lives of these public figures who have worked so hard to attain so much power—they have enormous effect on the rest of us. Henry VIII broke with the Catholic Church to marry Anne Boleyn, which changed the belief system of an entire country overnight. Antony betrayed Rome to ally with his lover Cleopatra, and both asked scores of soldiers to die on their behalf. It’s not just marital discord when nations and billions are on the line. The marriages are just like ours, but the stakes are anything but. And though America doesn’t have quite as many salacious stories of royal couples as older countries with monarchies do, “House of Cards” is an unsettling reminder that we can still have decades-long power struggles between the king and queen, with all the rest of us used as pawns.