Trump's one-click political ideology: His message is appealing in its simplicity, but there's nothing behind it 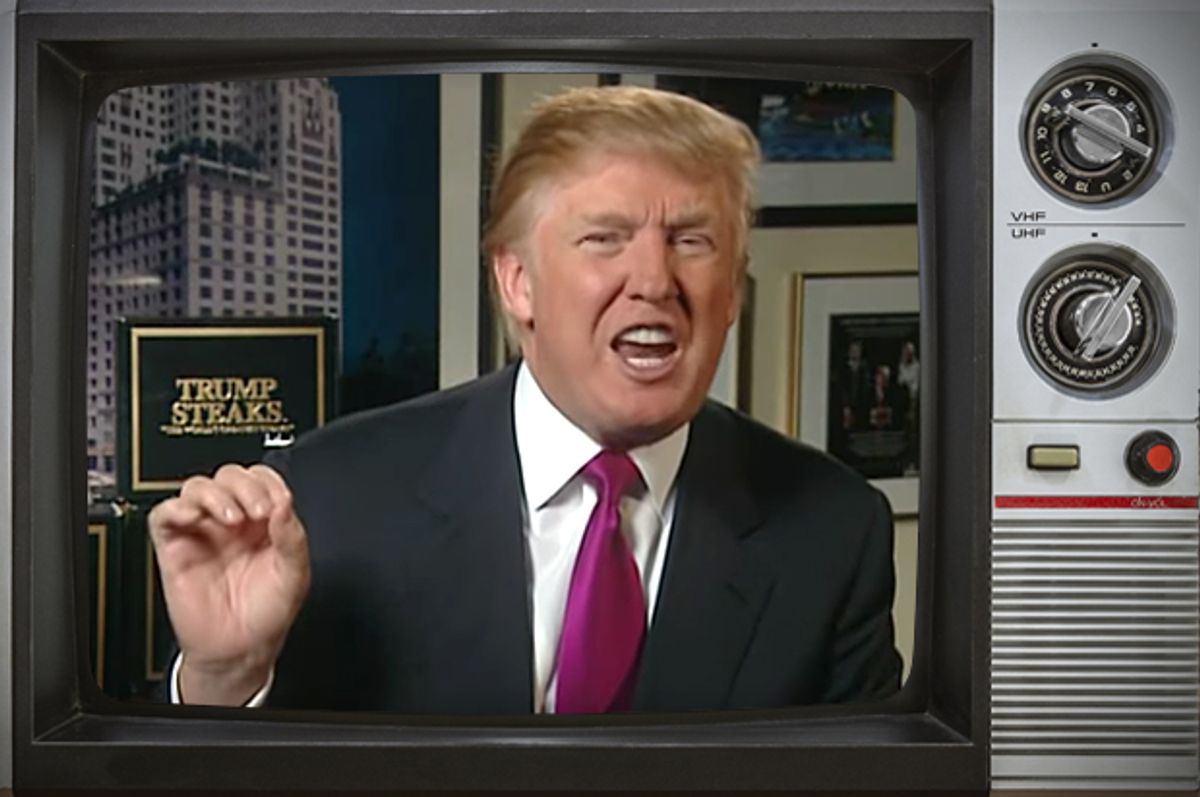 The amount of hand-wringing over Donald Trump’s candidacy has become a national epidemic. While many of us want to believe the Donald is an aberration who doesn’t represent true Americans, his enduring popularity suggests otherwise. On the one hand his brand of narcissistic populism has been a feature of American politics since the days of Huey Long or Father Coughlin and relies on a message that alternately flatters and frightens his audience. And like all demagogues before him, he skillfully, if crudely, co-opts the concerns of the frustrated masses as if they were his own.

But Trump’s rise has a modern twist in an era of digital media and celebrity worship. In an age where the famous are venerated for their salesmanship and media savvy, the language of advertising has become the lingua franca of the culture.

Pundits who gnash their teeth at Trump, a man who hasn’t defined a single policy position, can’t understand why his polls numbers keep rising. But his supporters are part of a population that on average watches  five hours of TV a day. Trump, whose public persona and professional brand are indistinguishable, became a celebrity in the controlled environment of reality TV, and has convinced legions of supporters his no-nonsense nonsense is what the nation needs.

Back in 1968 author Joe McGinniss defined the nascent phenomenon in "The Selling of the President," which outlined how Richard Nixon repackaged himself, like laundry detergent, as a "New and Improved Nixon" after losing the 1960 campaign. Rather than focusing on policy specifics, he became a candidate who spoke in generalities, smiled more and used coded language. It’s a technique Ronald Reagan, the former actor, perfected and that has become the blueprint for Republican politicians ever since. In terms of tone, his "It's morning in America again" ad could easily have been a pitch for breakfast cereal, pickup trucks or life Insurance, and has been cited as a turning point for his campaign.

American TV is a landscape of simple narratives that demand simple solutions. Network dramas are filled with principled lawyers and doctors and cops (so many lawyers and doctors and cops) who solve seemingly insurmountable problems nightly. It’s why Reagan, who spoke like a movie cowboy, was so appealing to the half of the country that Sarah Palin proudly described as right-wingin'-bitter-clingin'-proud-clingers. In the confrontational, shouty landscape of TV, nuance, detail and the fine print of life are absent.

What’s more, a shockingly large percentage of the programming day is taken up by ads. Except for children’s programming, there are actually no rules regulating the number of ads that can air in any given hour. In the many countries that Trump and his allies would dismiss as “socialist,” such things are regulated. Foreigners who come to the U.S. for the first time are amazed by many things, not least of which is the sheer volume of advertising that comes across the airwaves.

Advertising has a grammar all its own, one that increasingly informs entertainment, news, sports and politics. The scope of problems to be solved in a typical day of American advertising is mind-boggling. Leading the procession are the drug companies, who are masterful at simultaneously inventing a need and providing a solution. It’s no accident that Americans medicate themselves, their children (and their pets) so heavily for a sliding scale of ailments that once were considered personality traits. There’s a pill for something that’s been labeled "social anxiety disorder" (which sounds a lot like garden-variety shyness to me), binge eating and, now, one to handle the debilitating effects of thin eyelashes.

When the ads aren’t trying to scare you or make you feel insecure, they’re selling shortcuts – phones that tell you where to eat, cars that prevent crashes, and willpower in pill form. Once Amazon Prime came along with one-click delivery everything else felt like a chore. Trump is presenting us with a kind of one-click political ideology. Easy-OFF to clean up Washington. Too many immigrants? Build a wall. Too many terrorists? Deport all Muslims. When solutions aren’t readily available, he provides banalities that echo the language of ads (“Trust me it’ll be wonderful”).

The intellectual laziness at the heart of consumer culture is now intertwined with our political culture. Politicians like Trump or Ted Cruz know the message is appealing in its simplicity – a pimple cream for a chronic skin condition. Ads once painstakingly sold their ideas using exhaustive clinical research and huge blocks of copy in magazines that were supposed to sway the consumer with logic.

Similarly, politicians (and the journalists who covered them) once expressed themselves in paragraphs instead of sound bites. Then someone on Madison Avenue figured out that emotion beats logic and fear is often the shortest distance between two ideas. With cable-news shows now driven by ratings as much as politicians are by polls, an unholy alliance has been formed between the two. Long-form storytelling and nuanced ideas can now only thrive on the margins, where commercial considerations aren’t a factor.

Compare a show like "The Wire" (which aired on commercial-free HBO), a multi-level dissection of the corrupted political and social landscape of Baltimore, where every character is alternately victim and villain, hero and threat, to "Law and Order," which neatly divides the world into valiant crime-fighters and nefarious criminals, the way TV has done since "Dragnet."

Those who want to return to the moral clarity of the past seem unaware that such clarity was only a Madison Avenue and Hollywood fiction. The Great America Trump wants to return to is one that exists only in the mind of him and his supporters, when old white men ruled the roost unchallenged. America, if anything, is greater than it’s ever been since it is finally bringing into the open its internal contradictions.

By choosing our leaders as uncritically as we choose products off the shelves we risk more than getting ripped off. There’s no Better Business Bureau for politicians and no refunds. A wise man once said, “Every nation gets the government it deserves,” which, as far as democracies go, seems fair enough. But it makes you wonder what unspeakable acts Americans have committed to deserve the punishment that a Trump presidency would inflict.

Jason Bogdaneris is a journalist, speechwriter and filmmaker. His writing has appeared in The L Magazine, Montreal Mirror, Crawdaddy and the literary magazine Straylight. He has edited online films for the Nation, the New Press and was also a television scriptwriter.