Behind the music on "Vinyl": Getting Sly & the Family Stone all wrong — at the expense of the band's women

The HBO show about the music industry in the '70s gets small details right, but drops the ball on major players 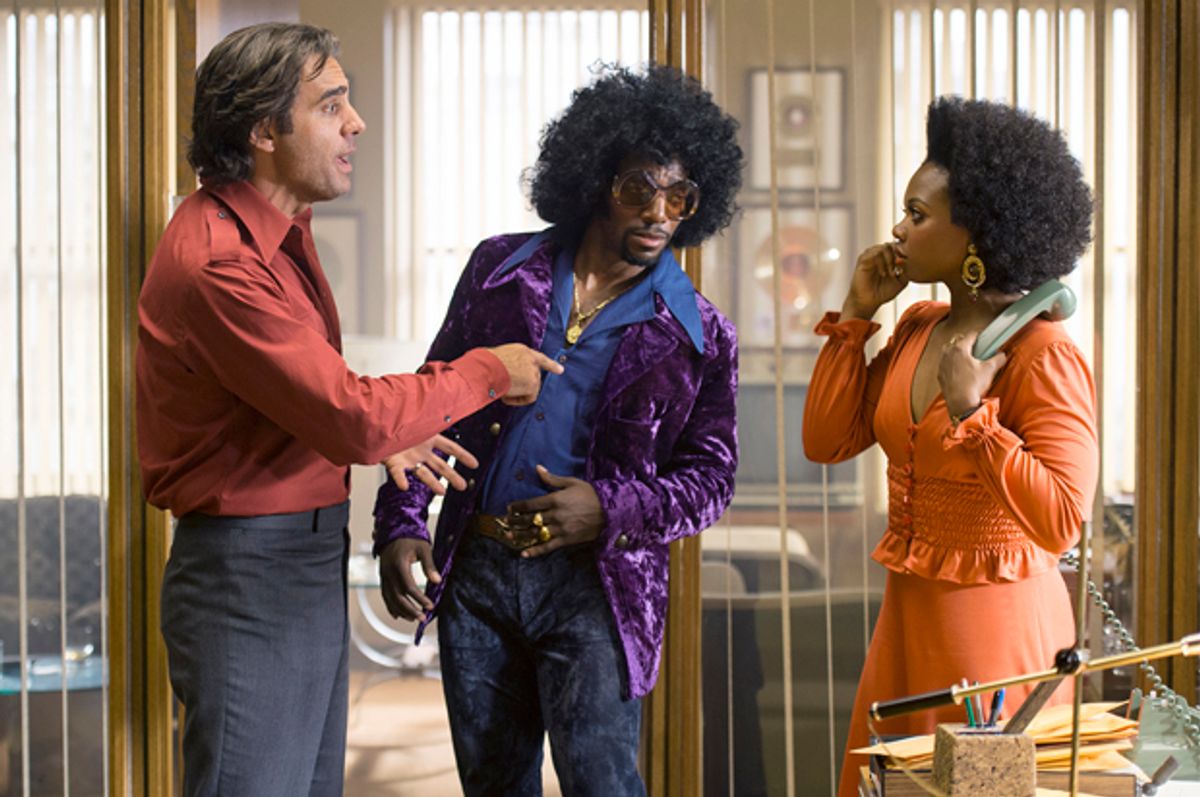 The centerpiece of episode 4 of "Vinyl," Martin Scorsese’s new HBO drama set in the record industry in the 1970s, is the introduction of Hannibal (Daniel J. Watts), an African-American funk artist modeled strongly on Sly Stone, of Sly & the Family Stone. His dramatic elevator-doors-opening entrance is to the magnificent “Psychedelic Shack” by the Temptations, which is the only positive element of this particular plot line.

If you’re not familiar with Sly & the Family Stone, it would be doing the man and a band a disservice to call them simply “groundbreaking”: they blasted their way through with dynamite. If you’re interested enough about music to watch "Vinyl," then you are likely familiar with “Dance To The Music,” “Family Affair” or “Everyday People.” Sly & the Family Stone brought funk to mainstream America with a chain of hits. They were also the first fully integrated band in rock and roll.

This is why the entire portrayal of Hannibal, and what’s been reduced to a retinue on "Vinyl," is so patently offensive. The women are stuffed into the trope of the nagging bitch, or the vapid sex symbol. Yes, there were backup singers, but that was not the only role women played in Sly & the Family Stone. Sly’s sister, Rose Stone, was in the band as one of the keyboard players, and the late Cynthia Robinson played trumpet. That’s her voice you hear at the beginning of “Dance To The Music,” exhorting the listener to get up and dance, and that’s who Sly’s talking about when he sings, “Cynthia, on the throne,” later in the song, before the horn solos.

These are the women "Vinyl" reduces to jealous, spiteful women complaining about the food being offered to the band, or the men complaining about their cooking, or even worse, when Richie (Bobby Cannavale) asks Hannibal how Star is treating him, the response is, “Star want me dead. That’s why I can’t go nowhere without her. Can’t give her time to plan.” In other words, the wimmin are crazy, amirite? trope. Yes, there are other strong women in the series, even within the constraints of the era, but to do it to this band in particular is infuriating beyond belief. Yes, it’s fiction, but either you remain true to what you bother to steal, or just completely make something up, like the Nasty Bits. This happens in the same episode which uses “Politicians In My Eyes,” by obscure Detroit proto-punk band Death, three African-American brothers who probably predate the Ramones. Once again, the small details are great; "Vinyl" continues to fail, and fail miserably, on the big ones, thus making the small ones pointless.

But wait, it gets worse. When Hannibal goes onstage at the Academy of Music (more on this later), there are somehow no women in the band, just as backup singers. And because they needed Hannibal to be part of an actual plot line, they couldn’t just have him lip sync to existing music; they had to write original music. So the song with which Hannibal, the major label star, opens his show at the Academy of Music, is the charming ditty, “Hey lady, let’s make a baby,” where that line is repeated a few times while Hannibal struts around the stage in an R-rated fashion. There’s a ham-fisted attempt at introducing the concept of equality, by having one of the backup singers utter the line, “So what you’re saying to me, brother, that every woman gotta be a mother, maybe that’s not my scene, if you know what I mean.” But the elements "Vinyl" gets right? Sly Stone’s mercurial nature and his substance abuse. Oh, and to be fair, they did get the suit mostly right, which you can see in this glorious footage from "Soul Train," although they forgot the matching hat.

The venue at which Hannibal is appearing is the old Academy of Music, later known as the Palladium, on 14th Street in Manhattan. It was a 3,000 seat venue that bridged the gap after the Fillmore East shut down. It is somewhat surprising that an artist of the stature given to Hannibal in the episode, with a renewed record deal at favorable terms, being actively courted by competitors, would only be at the Academy of Music and not, say, the Felt Forum (a theater inside the Madison Square Garden complex that held about 5,000). Nice try at the marquee--they even worked in some of the mod-ish graphic treatment you’d see on the Academy of Music’s weekly ads in the Village Voice--but the marquee was much larger. Howard Stein indeed was the promoter at the time, and up until 1976 when the name changed to the Palladium. I never made it inside the building when it was the Academy of Music, but the Palladium was one of the best places to see a show in New York City, and the theater has staged countless legendary gigs, from the New York Dolls to U2 to KISS to Lou Reed.

With that out of the way, let’s get to the rest of the episode. The scene in the limo where the rest of the American Century executive team are coming back from “Buck” Rogers’ (Andrew Dice Clay) funeral is priceless for its interaction with 1970s radio. “Candida” by Tony Orlando and Dawn is playing as the scene opens, with all its saccharine sweetness. “Is he trying to kill me??” asks Julie Silver (Max Casella), prompting the limo driver to hit the button on the radio to change the station. (There’s a gorgeous vintage view of Lower Manhattan, including the World Trade Center, while this action goes on.) The radio now plays Bobby Womack’s “Looking For Love” instead, an upgrade. This then switches to the cloying nails-on-chalkboard-ness of “Everything Is Beautiful” by Ray Stevens, which prompts all four men to moan in unison. This is a wonderful scene, because it is literally a picture-perfect re-enactment what it was like listening to the radio in the car in the 1970s, where you drove with one hand on the buttons if you cared about music at all.

If you have any memory of the days when record stores were large, sprawling spaces full of promotional artwork of all shapes and sizes, you’ll love the scene when Skip (J.C. MacKenzie) storms into Sam Goody (really the Rough Trade store in Williamsburg, Brooklyn). I knew they’d filmed it there and still had an, “Ohhhh, Sam Goody!” moment with that first shot of the display windows, where Donny Osmond is at the back, and the dueling banjos of "Deliverance" are given pride of place. “People love those banjos,” insists the store manager. “Dueling Banjos” was the name of the single, and it spent four weeks at #2 on the Billboard Hot 100. Donny Osmond had two albums out in 1973, but the one in question is "Alone Together." As you might be able to gather by the title, they were trying to transition him from teenybopper idol to mature artist, and while the album did well--it went to #26 on the Billboard pop albums chart--it wasn’t exactly the chart-topping success of his previous albums. (I was a Jackson Five girl myself back then, so cannot speak eloquently to the popularity of the Osmonds, except that nothing seemed less interesting to me, even as a pre-teen.)

The Hannibal story line continues through the next episode, where it’s unlikely to improve. But at least Clark (Jack Quaid) still hasn’t found a new act--he excitedly tells Jamie (Juno Temple) “I just found these two guys that sound exactly like Humble Pie,” and manages to continue to offend everyone in the process.