"My first novel was about celebrity semen trafficking, so I’m not claiming to be a pundit": 4 authors open up about their new books and careers 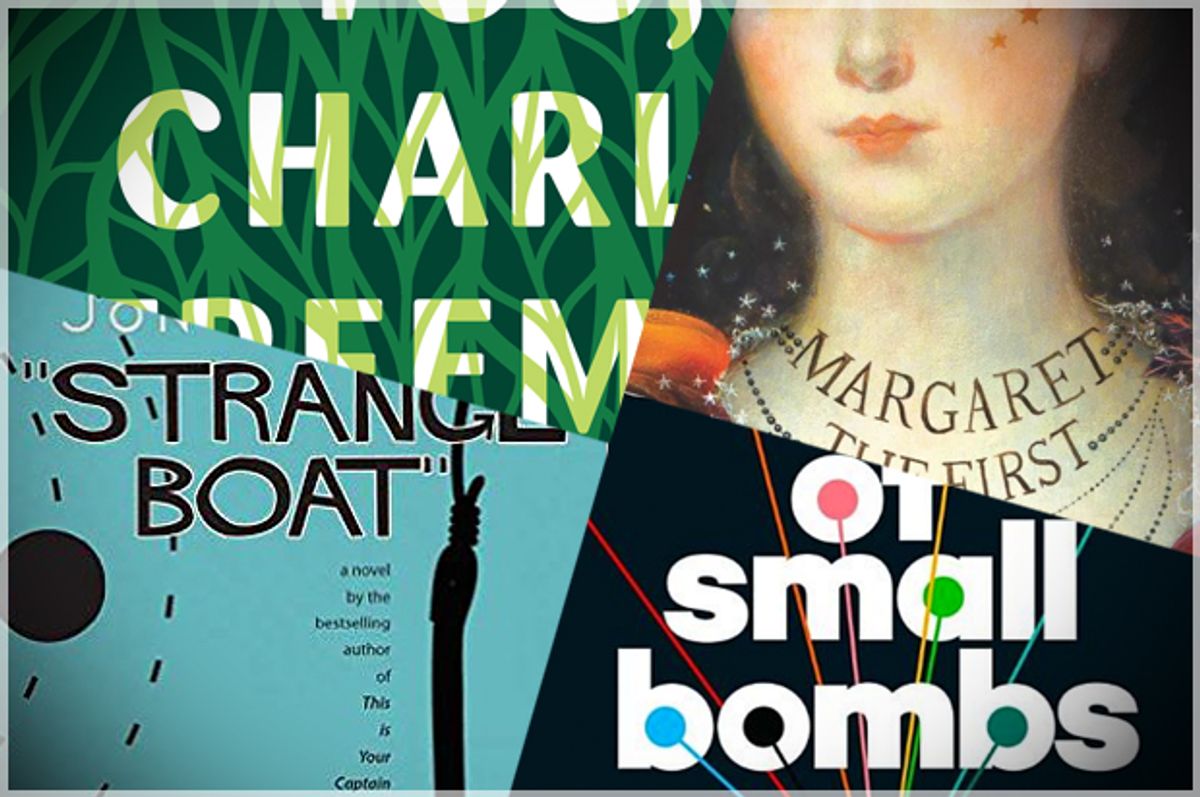 For February, I posed a series of questions — with, as always, a few verbal restrictions — to four authors with new books: Danielle Dutton (“Margaret the First”), Kaitlyn Greenidge (“We Love You, Charlie Freeman”), Jon Methven (“Strange Boat”), Karan Mahajan (“The Association of Small Bombs”).

Daniel Dutton: It’s a little like "A Portrait of the Artist as a Young Man" if Stephen were a woman living at a time when women weren't allowed to be artists.

Kaitlyn Greenidge: My book is about language, family and the reverberations of the past.

Jon Methven: The immensity of the end—be it a career, or relationship, or faith, or mortgage, or life, or all of them—and then deciding to survive, no matter the obstacle. It’s a book about survival.

Greenidge: My book is influenced by the tragedy of the limits of language.

Methven: The birth of my sons, day job, an illness, Mars One, New York City, happiness.

Mahajan: Turmoil. Revision. Restless switching between India and the U.S., between New York and Bangalore, between Austin and Delhi. Meditation.

Greenidge: Readable, entertaining, accessible. I worked very hard to make the book all of those things but I think reviewers use those words sometimes to mean "dumb" or "not very serious" or "fluffy." No one has suggested that my book is dumb, far from it. But I find it disturbing that some critics of literary fiction look suspiciously on the desire to communicate with a reader.

Mahajan: Apparently, the city of Delhi is a “character” in my novels. I’d argue that it’s a … city … in my novels.

Dutton: I like words too much! I don’t blame the words.

Methven: Overdone. Slapstick. Ugh. Painfully bad. The last was from an editor who opened a Yahoo! account, jmethvenwillneverwrite4XXX@yahoo.com, solely to send one email of how much he hated my writing. He promised he would never check the account so not to reply.

Methven: I make excellent sandwiches. Yo-Yo Ma is to cellists as I am to processed meats. Just a small, quaint, out-of-the-way deli where people from around the world would come to photograph my sandwich sculptures.

Greenidge: Secretary of education in the United States (provided I had unilateral powers and could work as a benevolent dictator). It is heartbreaking what sometimes happens to education in this country. Our greatest asset is the potential of free, quality, public education for all, regardless of race and class, and I think it should be protected and promoted at all costs. That sounds very authoritarian, but we live in extremist times, I guess.

Dutton: I’d choose a job that wasn’t as solitary as writing. My entire girlhood I wanted to be an actress, but I think really I wanted to be part of a cast. Or maybe I just wanted to be the characters I loved. I wanted to be Jane Eyre. Or Antigone. Today I’m tired and cold, so I would like to be Lady Mary and live at Downton Abbey and have Anna come and warm my nightgown before the fire.

Mahajan: I’m good at description and imparting flow to a story, but I don’t necessarily understand the value of long scenes. Maybe I’d like to be more boring?

Methven: I have a good imagination, so my ideas result in fun hooks for stories. I probably need work on dialogue, plot, setting, character, structure, etc.

Dutton: I don't know if you'd call it craft, but one thing I like about my writing is that everything I write is totally different from everything else I write. One result is that I never get too expert at anything, and the thing I wanted to get better at changes all the time.

Greenidge: I wish I was better at dialogue. Or rather, that it came more naturally to me. It always reads false, even in the fifth or sixth draft. I think I'm pretty good at writing a certain kind of first person.

Greenidge: Ha, that is a pretty combative question, isn't it? I don't think anyone should have interest in what anyone has to say, per se. No one is waiting for your next great novel with bated breath. I don't write with that in mind: that someone should have to listen to me. I write mostly about things that interest me, that I find fascinating. I write toward things that I long to see in literature and that I feel are missing. I write in response to books that infuriate or enthrall me. I don't write with the belief that the world is waiting eagerly for me to inflict my opinions on it.

Mahajan: I put my thoughts in a book, which must mean I don’t want anyone to read them.

Dutton: Oh, the world is large. It contains multitudes. If there are people on the planet who care what Donald Trump says, why not people who care what I have to say? But also: I don’t think of a novel as something I’m saying about something. I think a novel is more complicated and magical than that.

Methven: My first novel was about celebrity semen trafficking, so I’m not claiming to be a pundit on anything. There are so many great books and essays and websites, it’s an honor when anyone reads or writes about something I’ve written.