Sanders slips during debate: Bernie needed a good showing in Michigan, but instead came across as condescending and short-sighted 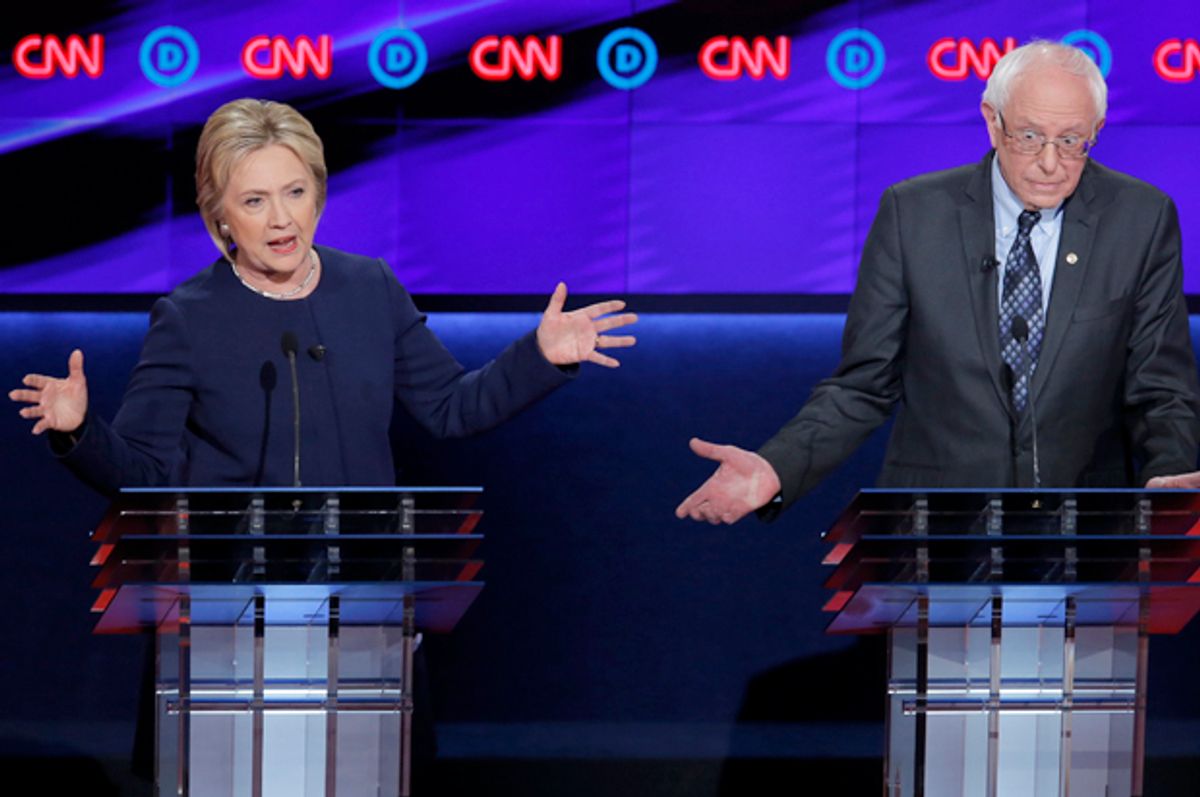 Bernie Sanders needed a good debate Sunday night. While the Vermont senator is doing a lot better in the Democratic primary than most would have expected when he threw his hat into the ring, Hillary Clinton Cstill has more than twice as many delegates as he does and is expected to sweep Michigan and Mississippi on Tuesday. To improve his already dim chances, Sanders had to find a way to appeal to women and people of color, because winning with white men isn't quite enough to push him over the top.

Unfortunately for Sanders, Clinton emerged as the clear winner of the CNN debate held in Flint, Michigan.

The first big misstep for Sanders was the condescending, hectoring tone he took with the former secretary of state. Sanders clearly seemed stressed out, which isn't surprising as he's losing the primary, and kept getting red in the face and talking down to Clinton. When she tried to interject during the debate, he sneered, "You'll have your turn," and "Excuse me, I'm talking," which might have been excusable — she was interrupting — if Sanders didn't turn around and interrupt her later in the debate during a discussion on gun control.

The Sanders team didn't apologize for the candidate's condescending tone, which reinforces already widespread suspicions that the candidate is gaining support from voters who don't want to support a woman but don't want to admit they are sexist.

"I think Bernie was being himself, I think he’s a real person,” Tad Devine, Sanders’s top strategist, told Buzzfeed News. “Some people may not like the way he wags his finger. That’s who he is. But we’re not going to try to change anything about him. Because I’ll tell you, the thing that’s connecting with him is his honesty, his authenticity, and the fact that he his who he is.”

The problem is that the "that's just who he is" happens to also be the excuse the Donald Trump surrogates have been making to justify his sexist outbursts, such as when Donald Trump Jr. said, "He’s allowed to have a personality," when rationalizing his father's tendency to make smarmy jokes to degrade women. Obviously, Sanders didn't and doesn't do anything even remotely as nasty as Trump does, but "being himself" is not any better for excusing talking to women like they're children than it is making period jokes.

But Sanders's powerful rhetoric probably wasn't enough to overcome Clinton's devastating attacks on the senator on a couple of key issues: Jobs and guns.

For weeks now, Clinton has been portraying Sanders as a "single issue" candidate, someone who is so caught up in his war on Wall Street that he neglects issues that are more important to everyday people. Sanders ended up proving that point for her during the debate, when the auto bailout came up. After Clinton correctly pointed out that Sanders voted against the auto bailout — even though the bailout saved jobs and the car manufacturers paid all the money back — Sanders tried to change the subject to how many donations that Clinton has gotten from Wall Street bankers.

The entire exchange left viewers with the distinct impression that Sanders is so single-mindedly focused on punishing wealthy corporate executives that he'd be willing to sacrifice the well-being of millions of ordinary Americans in order to hurt some rich people. And after baiting Sanders into looking like he's more worried about punishing fat cats than protecting jobs, Clinton rolled out her lengthy record in pushing for more regulation on the financial industry to protect consumers, noting that she called for "a moratorium on foreclosures" and for "for closing loopholes including the carried interest loophole." All in all, she was able to portray herself as someone who wants to balance reining in corporate interests with an understanding that these organizations still employ millions of Americans.

All of which made it even more devastating when Anderson Cooper pointed out that a bill that Sanders voted for, which shields gun manufacturers from liability, is likely to prevent the Sandy Hook families from suing Remington, which made the gun that was used to kill all those elementary school children.

"If you go to a gun store and you legally purchase a gun, and then, three days later, if you go out and start killing people, is the point of this lawsuit to hold the gun shop owner or the manufacturer of that gun liable?" Sanders answered. "If that is the point, I have to tell you I disagree."

Clinton was able, at this point, to jump in and argue that the threat of lawsuits could help "make guns safer and force sellers to be much more responsible," and that "No other industry in America has absolute immunity" from being sued if they sell a product that causes harm.

It seems very much like Sanders's anti-corporatism has one massive exception, which is the gun industry. While he did reasonably point that he's supported other gun control regulation, this unwillingness to hold manufacturers responsible for profiting off the death of school children is, at best, puzzling. (And profit they do. The Sandy Hook shooting ended up being a free marketing blitz for the gun industry, with Remington in particular making a mint after Adam Lanza helpfully demonstrated the stopping power of their guns by mowing down a roomful of first graders.) This made Sanders look hypocritical on top of impractical. He came across as someone who is willing to kill jobs in Michigan to make an anti-corporate point, but unwilling to hit the gun industry's profits if doing so makes it harder for his own constituents to get guns.

It's doubtful that a good debate performance would have saved the Sanders campaign, which is facing nearly impossible odds of catching up to Clinton's delegate count. But his poor performance just helped drill one more nail into his campaign's coffin.