Stripping and Starbucks -- when corporations take over desire

"Once I began dancing at Diamonds, I realized that while Backstage Bill’s was a strip club, Diamonds was a brand" 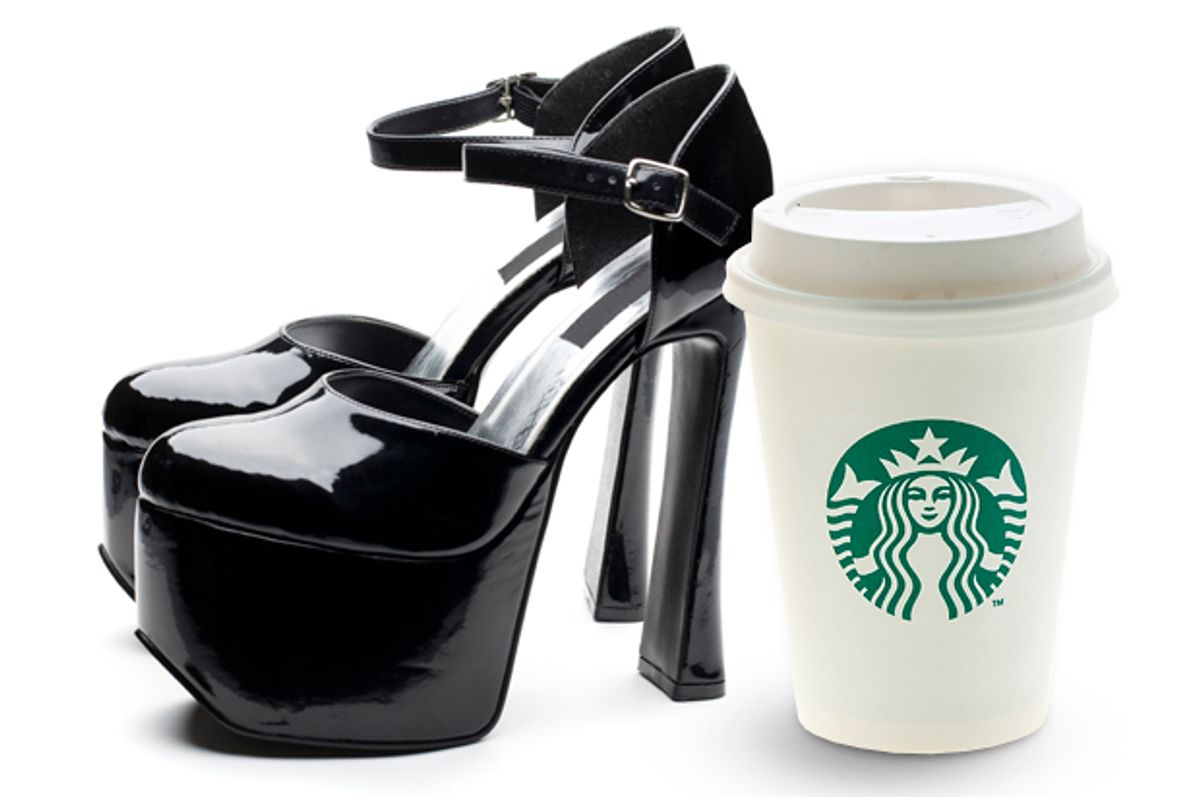 My regular is an elegantly dressed gentleman in his mid-50s, slightly overweight in a way that calls out for the word “portly.” He is soft-spoken and a little dull, but he pays me to listen—two or three nights a week, he comes to the club and buys me drinks and tells me his troubles, but never demands a dance. He likes me, he says, because I am “classy”—in fact, he tells me, I’m too classy for this place. I look around Backstage Bill’s: Smoke hangs languidly in the air, untroubled by air conditioning or filtering machines; 1970s-style wood paneling lines the walls; AC/DC throbs from the sound system; customers wearing T-shirts and baseball hats beckon dancers who wear neon string-bras and thongs. It’s a dive bar, just one that happens to have a lot of half-naked women in it.

He recommends that I audition for Diamonds, another club he frequents, about 45 minutes away. Backstage Bill’s is owned by three unlikely friends: a cop, a Hell’s Angel and a rarely seen, extremely well-groomed man said to be a member of the local Mafia. Diamonds, however, is part of a regional chain and thus more smoothly run. So the following week I drive to Hartford, finding the club on a desolate service road adjacent to the highway. It’s early in the evening, and the few customers in attendance wear button-down shirts and pressed slacks, some even sporting ties. The enormous circular bar sits at the center of the main room, its chrome bar rail reflecting the cool grays that comprise the club’s color scheme. Several dancers share the stage, moving gently as if being blown by a warm breeze. Their costumes look like what I see the undergrads wearing as they shiver outside dance clubs in New Haven: crop tops, strapless mini-dresses and hot pants. A large man in a suit asks if he can help me, and directs me to the manager’s office. The office is organized and clean, and conspicuously lacking posters of porn stars. The manager looks me up and down and then does something shocking: he asks for my ID. For their records. I realize I am in a new realm of corporate accountability.

Once I began dancing at Diamonds, I realized that while Backstage Bill’s was a strip club, Diamonds was a brand. I had started stripping while I was finishing my dissertation far from my home institution and possible teaching assistantships. By day, I wrote about dance as a means of social activism; at night I danced as a means of paying the rent. After several years performing in often avant-garde dance companies, I was used to taking off my clothes for art, but had never imagined doing so for money. But multiple part-time teaching gigs weren’t paying the bills, and when I saw an ad for exotic dance lessons I figured I had little to lose. Soon enough I found myself dancing at Backstage Bill’s, where I joined a diverse group of colleagues: there were dancers from all over the world, dancers over 40, dancers who were tiny, dancers who were tall, dancers who were skinny, dancers who were fat. Some dancers had graduate degrees; some had never attended high school; many lived from night to night, staying in motels because they couldn’t save enough money for a deposit and first-month’s rent. It often seemed to me that the dancers at Backstage Bill’s could have been put on a poster for multiculturalism.

After filling out my paperwork at Diamonds (something Backstage Bill’s would never have tolerated), my “audition” consisted of removing the costume that I had carefully chosen for the occasion— I didn’t have to dance at all. Somehow I was hired, despite being 10 years older and 20 pounds heavier than the vast majority of the other dancers. And there were a lot of other dancers: while Backstage Bill’s might have had 15 dancers working at one time, Diamonds often had 60 or more, all of whom looked very much alike. With few exceptions, the dancers at Diamonds were 18 to 24 years old, white, thin and fit but not athletically so, with straight shoulder length blond or light brown hair. Management dictated what we could wear, how we should talk to customers, and how we should dance: no pelvic thrusts, no shimmies, no bumping and grinding. We think of striptease as being about sex, but at Diamonds sex was stand-in for consumption. Unlike the raw sexuality of much of the movement at Backstage Bill’s, the dancing at Diamonds catered to a capitalist fantasy of delightfully clean, uniform women who could be purchased and consumed.

The difference between the two clubs was exemplified by Diamonds' ritual of selling calendars on weekend shifts: five times a night the DJ would play Mötley Crüe’s “Girls, Girls, Girls,” a signal to all the dancers, no matter where we were or what we were in the middle of, to drop everything and rush to the dressing room. There we were given copies of the club’s current calendar, which we were meant to hawk to the customers. We were lined up and paraded swiftly across the stage as if in a beauty pageant, and then forced to swarm into the audience trying to sell a package deal of a calendar and a lap dance for $25. If we were lucky enough to convince someone to take this deal, we had to turn $15 over to the manager for the calendar, thus being paid half the usual rate for the dance. As dancers, we were as packaged and standardized and managed as the shrink-wrapped calendars we were pushing on our customers.

Striptease embodies an ongoing debate about the power of corporations and brands to infiltrate every facet of our cultural and personal lives. In the past two decades, the striptease industry has transformed from mom-and-pop clubs perceived as seamy dens of illicit desire to multinational corporate chains that project an aura of wholesome, middle-class good fun. Exotic dance has become a global commodity, stripped of its potential to express subversive desires—erotic and otherwise. At Diamonds and other corporate strip clubs, dancers and customers alike perform a demographically designated brand that shapes desire in much the same way that Starbucks inculcated a taste for frothy espresso drinks. Every time I donned a hot pink dress I had bought at the mall or eschewed floor work for yet another strut around the pole, I lived and moved its upper-middle-class, middle-brow, white, “lite” brand of sexuality, one which seemed all too appropriate to its location on the outskirts of a city that had once been touted as the insurance capital of the world.

Stripping allowed me to move in new ways, to embody new and sometimes uncomfortable ideas about myself as both a desiring subject and object of desire. Performing this kind of dance, and having my performances appreciated by customers, changed the way I felt about my body: always considered “voluptuous” (a frequently deployed euphemism in the dance world for “fat”) in the realm of contemporary dance, the excesses of my body were valued in striptease, and I grew to value them too.

But there was something almost uncannily familiar from other service jobs in stripping at Diamonds: subject to management directives, costumes became uniforms; improvisations became routines; conversations became scripts. I began to resent the club and the customers, and to commit small acts of resistance: I wore five-inch heels rather than the regulation six; showed up late with long fake excuses, delivered with “real” tears, just to see if I could act well enough to avoid the fine; dressed in bizarre, bondage-ish costumes that I knew no one at the club would like. Finally, I did something that I knew would mean I could never return: I pocketed the $15 I earned on a calendar sale and lied to the house manager, telling him, straight faced, that of course I had given him the calendar back as usual. With sixty girls working the shift, I knew there was a chance he wouldn’t catch me, but I also knew that he thought that strippers were lying thieves in any case—and that now I had become one. It was time to go.

Jessica Berson teaches Dance Studies at Yale and Northeastern University, and recently won a Fulbright Award to study intersections among dance, disability, and sexuality in the UK. She holds a PhD in Theater Studies from University of Wisconsin-Madison and is a Certified Movement Analyst. Jessica’s book The Naked Result: How Exotic Dance Became Big Business explores the corporate takeover of the exotic dance industry, and what it means for dancers, customers, and people who would never set foot in a strip club. Jessica Lives in Boston with her husband and two sons. You can find out more at www.jessicaberson.com.