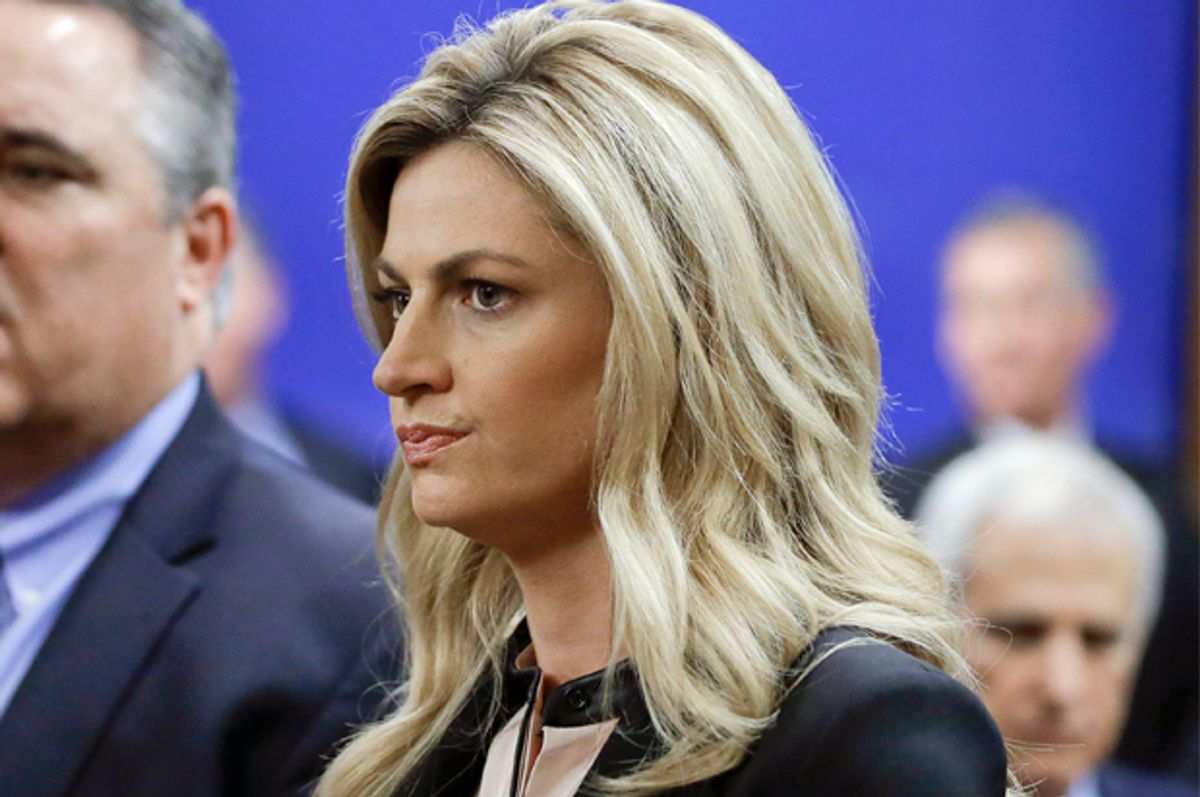 You would think that being awarded $55 million would constitute a decisive victory. And make no mistake,  the generous ruling in Erin Andrews' $75 million civil lawsuit against the Nashville Marriott at Vanderbilt University, the hotel chain’s West End Hotel Partners and Windsor Capital Group and her stalker Michael David Barrett sends an encouraging message about personal privacy and victims' rights. But it's not the jackpot it at first appears, nor does it do anything to end the grotesque ordeal Andrews still endures.

Six years ago, Barrett admitted how he'd learned of Andrews' travel schedule and "requested [a hotel room] right next to the former ESPN reporter." Exploiting flaws in in-house security, he gained proximity to her in three hotels, and then filmed her through a doctored peephole on her doors in two of them. In 2009, finding himself in a "financial bind," he released a four minute video of her, naked and alone. "I could hear that the shower was on in her room when I walked by," he explained. "I waited until the shower went off. Then I pulled out the plug and waited for the opportunity." In a Tennessee court late last month, computer expert and Penn State Professor Bernard Jansen estimated 17 million people have subsequently watched the video. Among the viewers, last week, was a representative for the hotel chain Andrews was suing. Also last week, Marriott's defense team argued to her that "Your income has gone up substantially since this occurred." So what has she got to complain about, right?

What happened to Andrews was a profound violation of her privacy, not just by Barrett but by the hotels that didn't take the safety of their guests seriously enough, and by the viewers who continue to watch the video and to torment her for it. Last week she testified tearfully that "This happens every day of my life, either I get a tweet or somebody makes a comment in the paper or somebody sends me a still of the video to my Twitter or someone screams it at me in the stands and I’m right back to this." And the Davidson County Circuit Court's decision is a validation of her experience. But it's also in many ways a symbolic gesture.

As SI's Michael McCann reports, "Consider that 51% of her damages — about $28 million — are assigned to the 54-year-old Barrett…. It’s a safe bet to assume he hasn’t amassed anything near $28 million. In fact, in 2010, Barrett’s attorney, David Willingham, said Barrett had lost entire life savings." As for the corporate defendants, "Expect the hotel companies to appeal the jury award and hope that a judge reduces it on the grounds that the jury acted with passion rather than thought." TMZ Tuesday estimated that when the dust clears, Andrews is likely to net in the neighborhood of $6 million. It's not shabby, especially for a case involving no physical injury, but it's not the bonanza it would at first appear.

And meanwhile, the fact that Andrews stands to profit from this debacle has infuriated her critics. As an SI commenter groused, "She wasn't traumatized when Disney was parading her half naked body on Dancing With the Stars shortly after. She was not hampered in her future either." The reliably disgusting Fox News' Keith Ablow this week welcomed legal analyst and lady parts expert Arthur Aidala to surmise that "Her career has skyrocketed since that happened. Her dollars and cents have gone up, her earning capacity." Ablow then helpfully calculated that "If a very famous woman decided, and I wouldn't advise it, to let herself be seen naked for 60 seconds by each spectator who wanted to in a hotel room, I think she could probably charge 1,500 bucks per 60 seconds." Meanwhile, the Daily News, furiously contrasting the Andrews outcome with those of the families of Eric Garner, Tamir Rice and Freddie Gray, opined that "Fifty five million dollars because people got to see Erin Andrews naked on the Internet. But Erin Andrews is still alive and, as the defendants in the case argued, is certainly thriving. She's free to go on 'Dancing with the Stars' or schmooze with NFL players. But a jury felt her pain — and treated the symptoms with cash. America, what a country." And the ever barrel scraping New York Post Tuesday ran a cover image of Andrews' face, as seen through a peephole, with the headline "$55M Peep Show."

But the Andrews award is not taking money away from others. Nor is it relevant that she has successfully built her career over the past several years, in spite of the daily humiliation she is still subjected to. You think the settlement isn't fair? Well, neither is having your stalker granted access to you; neither is having your privacy decimated. Andrews' victory doesn't mean there are no other, or greater, injustices in the world. And it clearly doesn't mean the gross commentary about what happened to her is anywhere near over.