"Even if Bernie wins, it will be nothing like 1933": Why liberals need to move beyond the New Deal

It's time for the left to take a hard look at the New Deal era, author and historian Jefferson Cowie tells Salon 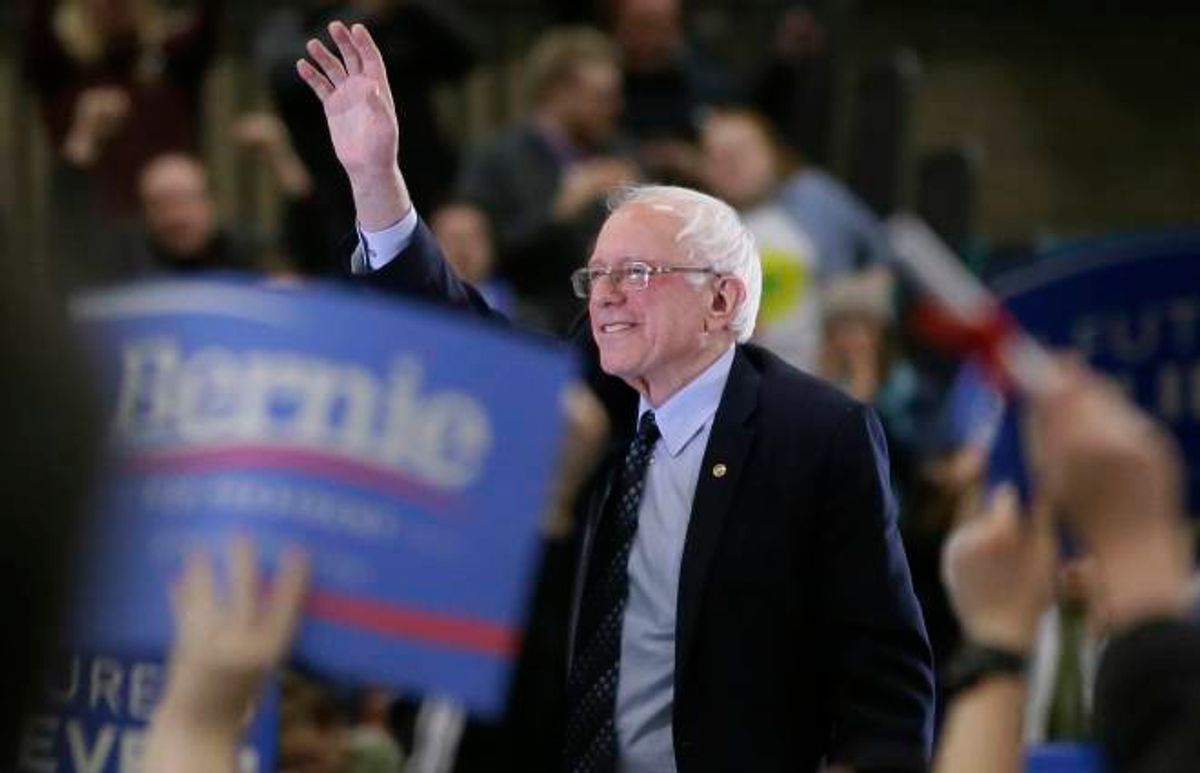 So far, the 2016 election has been something of a blast from the past. Ideas once regarded as intellectually defunct and politically toxic — "big government" liberalism on the left, ethno-nationalism on the right — are back with a vengeance.

Yet while it's hard (not impossible, but hard) to imagine that Trumpism will continue to thrive as its adherents fall prey to Father Time, few if any doubt that Sen. Bernie Sanders' old-fashioned, New Deal-type liberalism is going anywhere soon. It's simply way too popular with the kids.

But if the New Deal is to once again become the lodestar of left-wing politics in America, those who want to resuscitate it should make sure they understand it first. Because like every other romanticized period of human history, the reality of the New Deal era was a lot more complicated than most of us remember.

Perhaps even more important, the conditions that led to the New Deal were much more specific — and, potentially, difficult to replicate — than we understand. There's no question that the New Deal's ambition endures as an inspiration. But should the left look to it for guidance on the nuts-and-bolts of politics, too?

That's just one of the profound questions raised by "The Great Exception: The New Deal and the Limits of American Politics," the new book from Vanderbilt University professor and celebrated historian Jefferson Cowie. Recently, Salon spoke over the phone with Cowie about his book and its implications for politics today and in the foreseeable future. Our conversation has been edited for clarity and length.

Why is the way we understand the New Deal important for the here-and-now?

Especially for progressive thinkers and activists, it's important to understand how this big breakthrough happened and the social forces and political coalitions that were beneath it, because doing that allows us to see that it was unique, that it was distinct. Therefore, that forces us to think a little bit differently about the future of politics. I think that the New Deal has played this role as political metaphor. If it was, in fact, a very distinct, exceptional thing, then it makes sort of a bad metaphor or a weak approach to thinking about the future of progressive politics.

So what was it about the New Deal era that led to values like solidarity and equality having more political significance than they did before or after (without ever quite disappearing)?

That's the secret to understanding the book, is not seeing it as cutoffs, as, "We had X, then we had Y, now we're back to X." That's not the formula. In fact, you have to be able to understand that what made that decade and the New Deal order decades a little bit different was that it was always still connected with the past. It was never a complete overthrow or triumph over these historical traditions that I look at. It was always connected, always an ambivalent kind of thing. So you always have to understand that the old is still marbled in there with the new.

I think probably the most easily grasped [difference] today, given the state of political discourse, is immigration. That one tends to be more black and white than the others.

Immigration is shut off in 1924 for the most part. It's opened back up after 1965. So for these decades we are not arguing about one of the core things that we argue about in American politics, which is: Who is an American? What are their rights? What should be their morals, their standards, their behavior, their language? Which allowed Americans to focus on other things, on economic questions. Ironically, or perhaps tragically, it allowed more of a class cohesion to emerge around a more white, working class identity that showed up in the polls. People began to vote more for their economic interest than just their resentments against others.

Beyond sociological differences, were there any philosophical changes?

One that's much more subtle than immigration is individualism. Here I talk about not what I think to be a reality of individualism, but a very plastic ideology of individualism. We have this strain of individualism going back the the Jeffersonian Republican tradition in different guises all the way through Horatio Alger and various forms of jurisprudence that put individual rights ahead of collective economic rights, all the way up to Hoover, who's declaring our rugged individualism right before the economy collapses. Then the '30s come along and we have a much more collectivist decade. You see this in everything from everybody listening to FDR's fireside chats to Busby Berkeley musicals where everybody is acting in concert with each other to "The Grapes of Wrath" and a whole bunch of other things. The culture shifts towards a slightly more collectivist vision.

While still being distinctly American (Steinbeck's social realism notwithstanding).

Here's where you see the old connected with the new. It's not that individualism went away — individuals are still writing to FDR and blaming themselves for their problems in the middle of the economic crisis — but you do have more of a sense of collective fate emerging in the '30s and '40s, and solidified again during the war, that outweighs, just a little bit, the old pattern of individualism. We have a sense of collective destiny through the postwar period until, in the late '60s and 1970s, you see a renewal on individualism, even on the left.

Individual rights in a progressive version: women's rights, gay rights, civil rights, black rights. All of these things are so important in American politics — I don't want to denigrate them one iota - but they emerge in a way that does not necessarily cooperate with the old collective economic visions of before.

You mentioned earlier the "Jeffersonian Republican" strain of individualism that has long existed in American politics. Lately, though, it's been much more strongly associated with the right.

I think that's more the soul of American politics in a way, that Jefferson-Jackson streak. It's malleable; it has multiple incarnations and expressions. The political project is perhaps to think about ways that transcend the New Deal and tap back into some of that politics, that energy, maybe some of that policy.

Can you give me an example of what you mean? How do you use that individualist ethos for progressive ends?

For example: I'm an advocate of a single-payer healthcare system, but I think sitting around saying, "The poor millions of people that don't have healthcare, isn't it a shame? We need to provide health care for them," may not be the right way to think about it.

What would connect back to that Jeffersonian-Jacksonian streak might be to say, "What would unleash the entrepreneurial activity of this country best?" That might be that if you had health care, you could quit your job and go do whatever you wanted.

So it's the same goal, but it sounds a little less like Northern Europe and has a more American twist to it, by saying, "Okay, you want to start your own firm? Here's the best way to do it. We can provide healthcare for everybody and therefore you're free to quit your job, start a firm, etc."

You suggest that the progressive era might be a better model for the left right now, since the New Deal approach only worked in its unique circumstances. But one of the big problems with the Progressives was their unabashed elitism. How do you avoid making their mistake?

I think that's a really important question. The other issue is racism — not just against African-Americans, but towards immigrants.

What I'm thinking of when I advocate experimenting more with the progressive idea, it's really about how coalitions worked. I'm less interested in what they said; the elitist, top-down thing. I want to emphasize form over content.

OK. So how do the respective coalitions work?

When we think about the New Deal coalition, it's a block. It has a very specific collection of people in a political coalition and they scratched each other's backs and moved forward.

The progressive era is much more kaleidoscopic. It's much more shifting and twisting. There's cross-class alliances, churches working with immigrant groups, with settlement houses, with unions, and those alliances shift and chance. It's a much less stable and more challenging but richer way to think about the future of politics than the New Deal coalition.

I didn't actually agree with his characterization of Clinton and Sanders' respective approaches to politics, but I'm reminded of Jonathan Chait's argument about the role pluralism should play within the Democratic Party coalition — specifically, his idea that Clinton has a seat at the table for Wall Street in a way Sanders doesn't.

The entire problem with framing it around a pluralist concept is that the table is run by bankers. And that's Sanders' point.

Right. Being at the table doesn't matter so much if you're being drowned out or silenced.

All that said, I'm not even sure that's even the model. Because I'm not sure that elite party politics are the model right now. I think Washington is close to a lost cause right now. I think pressure has to develop from a variety of incubators and laboratories around the country, and the real action is going to be in municipal, state, local and regional efforts.

Federal politics is gridlocked in such a way that any incoming president — especially an outsider — is going to face enormous amounts of resistance.

Even if Bernie wins, it will be nothing like 1933, where you had a massive congressional Democratic victory, in which they were hungry to pass almost anything that Roosevelt put forth. It would be the exact opposite.

Has anyone misinterpreted your prognosis to read: "The New Deal model is dead, so therefore the left is doomed"? The New Deal is so romanticized on the American left that I wonder if people don't conflate it with left-wing politics in general.

Is it a cynical argument? I think cynicism is more just hoping that this past comes back, that we can just chase this ghost and have it return.