Ladies, don't smoke, drink or have bad thoughts while pregnant. But for men, anything goes?

We have countless studies on how women's daily habits can affect their babies' health. Shouldn't we study men too? 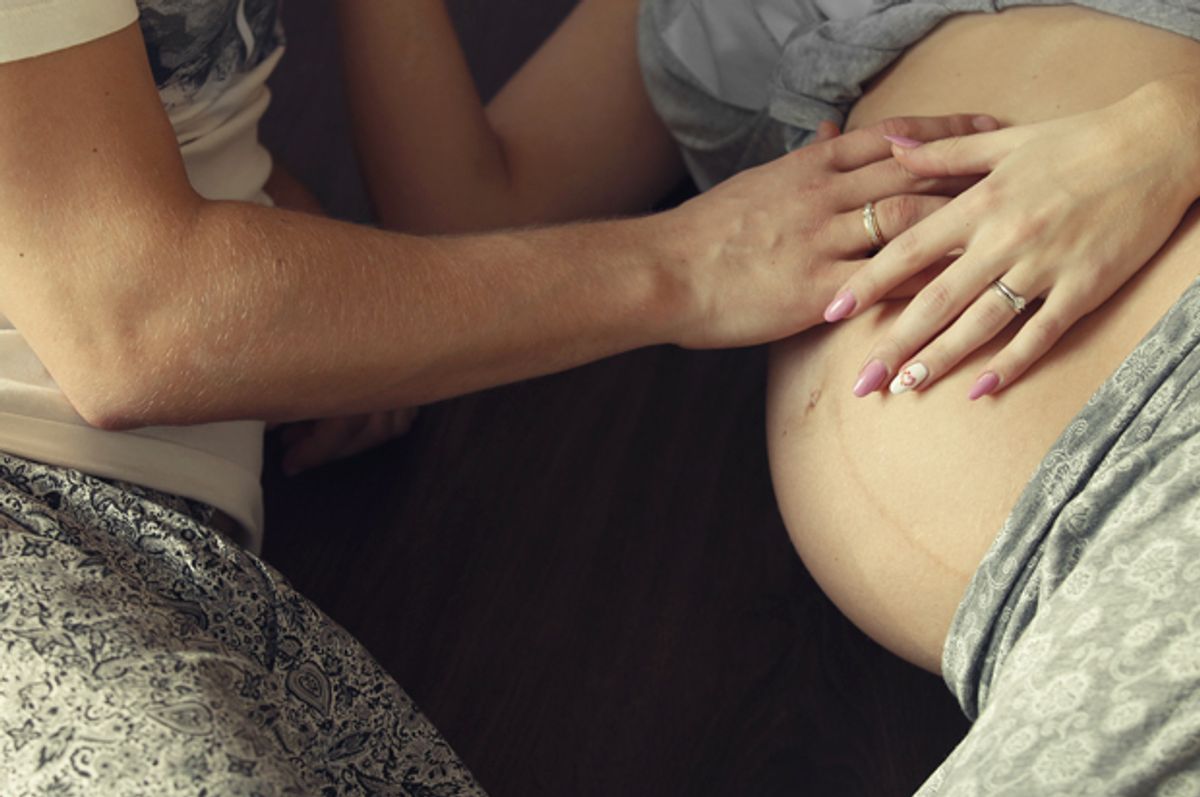 The burdens of modern parenting fall disproportionately on the shoulders of mothers. Studies find that among couples who work full-time, household chores are evenly divided, until they have a kid, when working moms end up doing more of the childcare and housework. New mothers, in significant numbers, report feeling depressed—in some cases, to the point of suicidal ideation—under the weight of unrealistic expectations of perfection. A 2011 Slate article cites research indicating mental health disorders in new moms are worsened by “breast-feeding troubles, sleep deprivation, and unhelpful partners.” Saddled with so much responsibility, both married stay-at-home moms and those who work outside the home overwhelmingly state they feel like single parents. Actual single mothers, researchers find, are so stressed out it eventually takes a toll on their physical health.

Even before children enter the picture, women are tacitly informed that they bear almost exclusive responsibility for getting the whole pregnancy thing right. We’ve heard lots about how women’s age, daily habits and environments can have huge consequences for their babies’ health. Those are useful warnings, and no one’s saying they should go unheeded. But even researchers admit that sexism impacts scientific research, leading to a disproportionate number of studies focusing solely on what mothers are doing wrong. As men are responsible for 50 percent of the babymaking process, it stands to reason that dads probably have at least a tiny bit of biological input.

Drinking seems like a good place to start. Since the early 1970s, public education campaigns have let women know that consuming alcohol during pregnancy can cause fetal alcohol spectrum disorders, including lifelong learning disabilities, abnormal physical features and problems with hearing and seeing. In 2013, researchers published findings suggesting that men who drink before conception also contribute to FASD. Male lab rats were exposed to alcohol for seven weeks, allowed to dry out for one week, then paired with non-alcohol-exposed females. These matings resulted in offspring afflicted with “severe fetal abnormalities,” according to researchers. As the Examiner notes, these included exencephaly, a cranial malformation where the brain is formed outside the skull. Researchers attributed these conditions to the harmful impact of alcohol on sperm, and wrote that the frequency of their appearance was “statistically significant.” Alcohol use by fathers-to-be, they concluded, didn’t have to be extreme to pose serious risks to fetal well-being.

This was fairly groundbreaking information related to an issue of near moral panic, with big implications for public health. Three years after the study’s conclusion, the CDC issued a warning to women hoping to get pregnant immediately about the potentially devastating effect of alcohol. While lots of people called out the agency for essentially telling all women who aren’t on birth control how to live their lives (it didn’t), the real sexism of the campaign went largely overlooked. Here was a chance for the CDC, which has its finger on the pulse of medical advancement and discovery, to spread the word about possible serious downsides to men’s alcoholic consumption. Yet for some reason, it wasn’t mentioned at all.

This is pretty much in keeping with our singular focus on women where babies are concerned, despite lots of research showing the daily lives and chosen experiences of would-be fathers come heavily into play. There’s constant awareness-raising about the dangers posed when women smoke during pregnancy. But as the Conversation notes, “[s]tudies from China, Australia and Europe have identified an approximate 30 percent increase in the rate of childhood cancers"—particularly brain tumors, lymphoma and leukemia—"when fathers smoke prior to conception.” For children under age 5 with long-term heavy smokers for dads, that increase can be as high as 80 percent. A 2012 study even points to a possible link between fathers who expose mothers to secondhand smoke at the time of conception and serious congenital heart defects in newborns.

The accepted wisdom about women of “advanced maternal age,” or 35 years, is that their ticking biological clocks require them not only to overcome issues around declining fertility, but that their children are more likely to have health problems. That’s also true for men as they get older, though we don’t hear much about it. Harry Fisch, a urologist at New York Presbyterian Hospital and professor at Cornell’s medical school, wrote about the issue in his 2005 book The Male Biological Clock. The doctor says that for his efforts to inform, he received an unexpected amount of blowback.

“I took so much crap for writing that book, it was unbelievable," Fisch told the Washington Post last year. "Holy cow, when it first came out, a lot of people were upset that I was debunking the machismo image of men as they age.”

But getting older isn’t unique to any one sex, and aging leads to many of the same problems in both fathers and mothers. “I don’t see why everyone is so surprised,” Pamela Madsen, founder of the American Fertility Association, told the New York Times. “Everyone ages. Why would sperm cells be the only cells not to age as men get older?”

One UK study found that it took men age 45 and older five times as long to successfully impregnate their female partners as men under 25, even when controlling for frequency of sex, lifestyle choices and women’s age. Another study presented at the American Society for Reproductive Medicine last year found that men’s fertility drops about 7 percent each year between ages 41 and 45, after which it declines even more precipitously. In that four-year span, men's odds of reproducing fall from about 60 to 30 percent.

Other studies from researchers in Pakistan, the United States and France find that once men reach age 35 to 40, their partners' risk of miscarriage increases by as much as 50 percent. A Swedish study of more than 23,000 cases found that “[p]regnancies fathered by a man aged 50 or more years had almost twice the risk of ending in a fetal loss” compared with fathers aged 25 to 29. Researchers in that study indicated that the impact of paternal age on fetal mortality began to present itself as early as age 45.

“Obviously there is a difference between men and women; women simply can’t have children after a certain age,” Fisch told the New York Times. “But not every man can be guaranteed that everything’s going to be fine. Fertility will drop for some men, others will maintain their fertility but not to the same degree, and there is an increased risk of genetic abnormalities.”

The doctor notes that like all cells, mutations develop in both sperm and eggs as the years pass. The difference for women is that at birth, they have all the eggs they’ll ever produce. Men’s sperm cells continually regenerate, dividing again and again over the course of a lifetime. Those cellular “splits” have happened an estimated 840 times by the time a man hits 50. Consider it a bit like a photocopy that degenerates slightly with each replication. Those mutations are passed along from father to child, with older fathers passing along increasing numbers with age.

Those genetic mutations in men of “advanced paternal age,” to modify a phrase, were found to be associated with psychiatric disorders in multiple studies. A 2014 report examining more than 2.5 million public health records found an increased risk of autism, ADHD, psychosis, bipolar disorder, suicide attempts, and substance use problems in offspring born to men age 45 and up.

“To me, this was a remarkable observation because when I was in medical school, we were always warned about the age of the mother," neurologist Kári Stefánsson, who led the study on sperm mutations, told the Washington Post. "You could argue that in our work, there is buried a little bit of redemption for the old mother that we are always criticizing for the risk of having children, because what is truly dangerous is the high age of the father."

There are additional factors. High stress levels of fathers while their babies are in utero may be associated with behavioral problems in their toddler-aged kids. Researchers think they’ve found a causal link between some birth defects and paternal occupations, a list of which includes both predictable and totally unexpected vocations (“mathematical, physical and computer scientists; artists; photographers and photo processors; food service workers; landscapers and groundskeepers; hairdressers and cosmetologists; office and administrative support workers; sawmill workers; petroleum and gas workers; chemical workers; printers; material moving equipment operators; and motor vehicle operators”). And fathers whose diets are nutritionally deficient may increase the risk of “severe” birth defects in their children by as much as 30 percent.

“No one ever thinks of birth defects as coming from the father if they aren’t genetic,” Sarah Kimmins, a reproductive biologist of the latter study told the Washington Post. “This is becoming a really outdated way of thinking.”

Forget, for a moment, the myriad ways mothers can negatively affect their babies’ health and instead, briefly consider how much damage is done by not examining what dads should be doing. The problem isn’t just that ignoring paternal issues exacerbates sexism or inequality, though those are pretty good reasons to rethink our biases. It’s that the role men have to play in creating healthy babies is being overlooked. Which can add up to pretty terrible outcomes for babies overall. All because of our outdated ideas about gender roles.

“It’s not just about women anymore, it’s about you, too,” fertility advocate Madsen added, speaking to the Times. “It takes two to make a baby, and men who one day want to become fathers need to wake up, read what’s out there and take responsibility.”

That’s all true, but we could be doing a lot more to ensure the information men need is widely available. Most women, whether they want to have kids or not, have been inundated for decades with messages about what they should and shouldn’t be doing before and after pregnancy. Direct some of those messages to men. Women don’t make healthy babies on their own.