Peyton Manning is no hero: Would his troubling past be ignored if he weren't white?

What's going on when an alleged sexual assault gets swept under the rug amid tributes to the football "hero"? 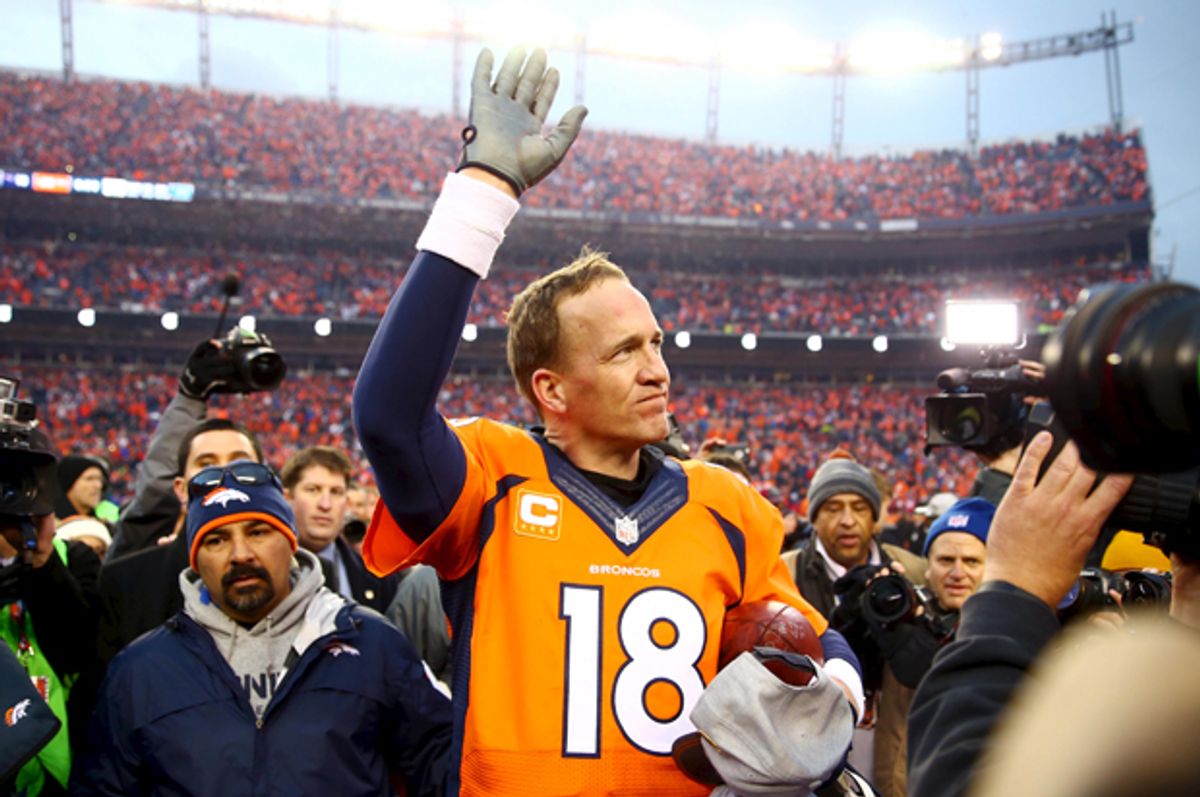 After 18 years in the NFL, Peyton Manning is hanging up his helmet. As was widely expected, the 39-year-old quarterback announced his retirement on Monday, followed by the requisite tributes that follow a two-time Super Bowl champ calling it quits. The respectful send-offs focused on his many accomplishments—including Manning’s Heisman trophy and his record-breaking five NFL MVP awards. The stats speak for themselves: Peyton Manning amassed more touchdowns and overall passing yards than any other quarterback in history.

In the Guardian, Paolo Bandini remembers Manning as an “everyman and superman” whose presence in the league, as well as his “charm and the goofball wit,” will be sorely missed. “His cheesy jokes and self-deprecating sense of humour made him relatable to audiences in a way that few others could be,” Bandini writes. “Where Tom Brady, with his supermodel wife and (until recently) LA mansion, has been the perfect pitchman for upscale brands like Movado and Gláceau Smartwater, Manning has hawked Oreo cookies and Papa John’s Pizza.” ESPN notes that Manning “changed the game.”

But what gets reduced to a footnote and an afterthought in these teary-eyed hagiographies is that Peyton Manning was no hero, despite his Boy Scout public image. On Dec. 28 of last year, Al Jazeera reported that Manning took human growth hormone back in 2011, following the quarterback’s neck surgery; it’s currently the subject of an ongoing NFL investigation. But even more damning are the allegations that Manning sexually assaulted a female trainer while he was a student at the University of Tennessee. The report doesn’t appear until the 19th paragraph of Bandini’s Manning tribute. It escapes mention by ESPN at all.

In February, Shaun King of the New York Daily News released documents from a 1996 investigation into a case involving Dr. Jamie Naughright, the former director of health and wellness for the Men's Athletic Program. According to court reports, Manning assaulted Naughright while she was inspecting his foot for a potential stress fracture. “Manning allegedly then proceeded to scoot down the training table while Naughright examined his foot,” King writes. “At that point, she said, he forcefully maneuvered his naked testicles and rectum directly on her face with his penis on top of her head.”

Peyton Manning has said that Naughright’s recollection of the incident is false and that he was merely attempting to moon a teammate, Malcolm Saxon. Saxon, however, has repeatedly denied Manning’s account and specifically wrote a letter to Manning following the altercation, telling him to “come clean.” “You might as well maintain some dignity and admit to what happened,” he said. “Your celebrity doesn't mean that you can treat folks this way.” With Saxon unwilling to corroborate, two Tennessee faculty members asked Naughright if “she would consider blaming the entire incident not on Manning, but on another athlete—a black one.”

Dr. Naughright would eventually leave the university, finding another position with Florida Southern as the school’s program director for the Athletic Education Training Program. Five years after the initial incident, Naughright received a Xerox copy of “Manning: A Father, His Sons and a Football Legacy” in an envelope taped to her door. The manuscript—a ghostwritten biography of Peyton Manning’s father, Archie—testified to the Mannings’ version of what transpired in that locker room. After Naughright’s supervisor read the documents, she was unceremoniously fired from her position. She later sued the family for libel.

If this is the first you’re hearing about the case, color this writer unsurprised. Aside from King’s exposé, the incident has received strangely little coverage in the media; the allegations disappeared from the news cycle shortly after they surfaced. King’s story was published on Feb. 13, when Google Trends show that search terms for “Peyton Manning sexual assault” peaked. Just six days later, interest in those terms dropped from a perfect 100 (the definition of “breaking the Internet”) to a zero. When a reporter asked Manning about the incident during his retirement speech, ESPN cut the feed.

Contrast this with the case of Ray Rice, the former Baltimore Ravens running back who became a constant source of national headlines after video surfaced of the player punching his wife, Janay Palmer, in the face. A leaked video from TMZ showed Rice knocking her out in an elevator, leading to widespread outrage at the National Football League’s lack of response. Despite the fact that NFL commissioner Roger Goodell was reportedly shown footage of the incident, the league only punished Rice with a two-game suspension. After the TMZ report went viral, Rice would be released from his contract by the Ravens and suspended from the NFL. He’s currently a free agent.

There’s, of course, a major difference between these two men—one is white and the other is not. It’s yet another instance of men being punished very differently by the American public for committing horrific crimes. After Rice was dismissed by the Ravens, he was referred to as a “thug” by Paul LePage, Maine’s Republican governor, who argued that he should be suspended for three years. LePage continued, “As a matter of fact, the team should have taken him out in the back shed and taken care of him.” LePage has, like most people, been silent on the issue of Peyton Manning.

This is part of the racial double standard by which we judge black celebrities and athletes, who are referred to as gangsters and criminals while their white counterparts are excused. In January of 2014, Seattle Seahawks cornerback Richard Sherman broke up what would have been a game-winning pass between San Francisco 49ers quarterback Colin Kaepernick and receiver Michael Crabtree. When he was interviewed by Erin Andrews, Sherman responded boldly. "I'm the best corner in the game,” he said. “When you try me with a sorry receiver like Crabtree, that's the result you're gonna get! Don't you ever talk about me!"

But instead of discussing Sherman’s incredible feat of athleticism, Deadspin’s Kyle Wagner showed that something else was on America’s mind. In the day following the matchup, Sherman was called a “thug” 625 times on television. Wagner’s colleague Greg Howard further explained: “In that moment, whether he knew, cared, or neither, Richard Sherman, a public figure, became a proxy for the black male id. … When you're a public figure, there are rules. Here's one: A public personality can be black, talented, or arrogant, but he can't be any more than two of these traits at a time.”

It’s hard to imagine any of those words associated with someone like Peyton Manning or even Justin Bieber—someone who has committed far worse misdeeds than Sherman and recently had the top two songs in America. Manning is certainly talented. He is absolutely arrogant. If you need proof, witness the quarterback storming off the field after his Super Bowl loss to the New Orleans Saints in Super Bowl XLIV. But if you have to ask why Manning was barely criticized while Carolina Panthers quarterback Cam Newton was branded a “poor sport” following his recent loss to the Broncos, it’s because of that third thing: He is Caucasian.

Peyton Manning is just another line in a long line of “heroes” whose accomplishments and careers we will decide are more important than the lives of the women they allegedly abused—ones that include directors like Woody Allen and Roman Polanski. But it’s extraordinarily telling that back in 1996, Tennessee’s staff members reportedly looked for a black athlete to pin the incident on. What Ray Rice did and Peyton Manning is alleged to have done are both horrible. But it’s a lot easier to let one person slide when we don’t have a black face to attach to the crime.