Trish Regan praises Nancy Reagan, dutiful wife and anti-career woman, as "everything a feminist should be" 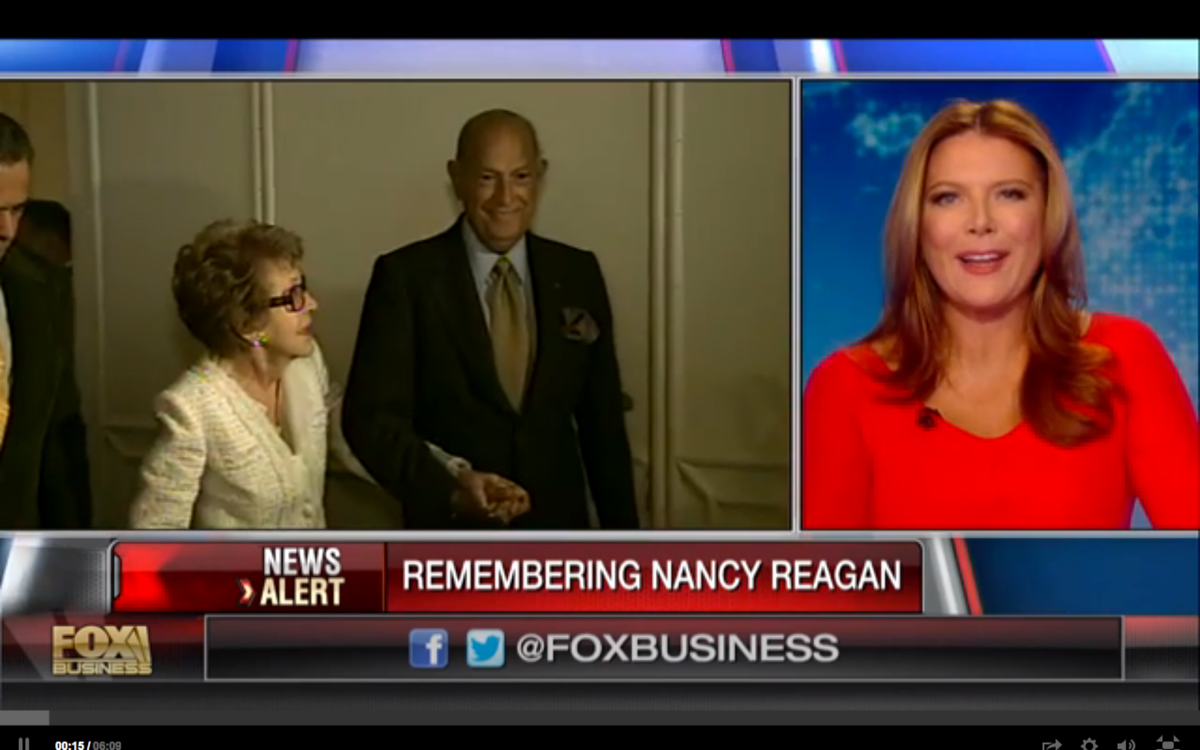 Nancy Reagan lived her life glorifying women's submission, so I suppose she'd be happy to know that Fox Business Network is using her death as an opportunity to bash feminism. Host Trish Regan went on a rant arguing that Reagan, who openly and unabashedly believed that a woman's place was serving her husband, was somehow a better feminist than all those meanie women who think that women are equal to men. Pshaw, what kind of feminism is that compared to the "feminism" that treats women as appendages to their husbands?

"With the passing away of Nancy Reagan, the world has lost a woman who was a great American, and a great role model for all of us, especially women,” Regan sneered, in full umbrage mode. “I remember as a kid hearing some of the criticism against her, that she was too old fashioned, not a modern woman, someone who just lived in her husband’s shadow.”

Well, yeah. I mean, Nancy Reagan didn't exactly hide that this is exactly who she was. She openly and unashamedly went out of her way to downplay her own intelligence and influence, so her husband's star would shine brighter in comparison. She was so committed to the idea that a wife's place is in the home that she actually apologized for the one time she took paid work after she married Ronald. It's weird to "defend" someone by getting mad at other people for describing her dearly held beliefs for what they were.

This segment is fun for me in particular because, while Regan is too cowardly to use my name (it rhymes with Far-Caught, if that's the concern), she uses my tribute to Reagan's enduring anti-feminism as evidence that feminists are mean for pointing out aspects of Reagan's personality she didn't try to hide.

"There was actually a piece today in the liberal online publication Salon.com," Regan complains, "accusing Reagan of being a promoter of inequality and effectively trying to legitimize women having a subservient position to men. Well, in fact, Reagan was everything a feminist should be."

Oh hai! That would be my piece. Read it. I think it's quite lovely.

On one hand, Regan gets offended at the idea that Reagan was trying to valorize her life path of subservience to her husband. On the other hand, she says we should all consider Reagan a role model and that feminists should wish to be just like her, which is to say someone who believed that a woman's role was to stand in her husband's shadow, with the only power she exerts on the world being through him. Either Reagan was a role model or she wasn't. You can't really have this both ways.

But this kind of incoherence is fairly typical of modern anti-feminism, of the sort that Reagan herself helped usher into being. Regan tries to paper over these contradictions by claiming that submission is not submission so long as you choose to be submissive. "Nancy Reagan believed, not in society making choices for women, but in women making choices for ourselves," she waxes romantically.

Oh, poppycock. Conservatives only love "choice" when the woman is making what they believe is the "correct" choice: To abstain from sex, to marry young, to be submissive, to not get an abortion. All this umbrage-taking is silly and disingenuous. And the proof of this is in the pathetic attempt to frame the choice to be a submissive wife as if it's made in a vacuum with no influence or impact from "society."

But Regan knows full well that it's not a freely made choice that has no influence at all from society. On the contrary, she uses terms like "role model," "old-fashioned," and "aspire," — all words that are very much acknowledgements that society shapes our desires and our choices. Reagan didn't have some genetic desire to be her husband's adoring shadow. Society told her that to be a good woman is to live in the background, and she, wanting to be a good woman, did that. And the reason that conservatives hold her out as a role model is because they want to continue pushing the message that a woman's place is in the home.

Or, put more bluntly, if being a submissive spouse who lives only to serve is such a freely made choice that has nothing to do with social pressures, then why don't we see men doing it?

All this hand-waving about choice is an attempt to distract from the fact that they very much want women to believe the choice of housewifery is the best choice there is, and all other choices make you lesser-than. You're not really making free choices if your options are "be a good woman who is doing everything right" and "be an emasculating bitch."

Of course, this entire segment feels very vindicating to me because I laid out a theory of how the right reacted to feminism in the 1980s, a strategy that I argued they continue to this day. After it became politically unsavory to simply order women back into the kitchen, the right switched tactics. They started arguing that submission was a "choice" women were making. But to give this argument weight and authority, it was largely being advanced by ambitious, professional women who had no desire to stay in the kitchen. It's a contradictory mess, built more on trying to "gotcha" feminists than to advance a coherent ideology.

And here comes Trish Regan, eager to demonstrate how right my theory is, by earning a fat paycheck and wearing a power outfit while pandering to her right-wing audience by waxing poetic about the joys of the old-fashioned life of submissive housewifery. You can't help but wonder if she thinks Nancy Reagan's life is all that, why she doesn't quit her Fox Business job and get that apron on, stat.

But these kind of contradictions don't bother the right-wing audience of Fox Business, because they just want to hear about how those meanie feminists are all mean and stuff because we disdain the romanticization of women's inequality. So it was in Nancy Reagan's time, and so it will sadly be probably for decades to come.