Meanwhile, three potential candidates have already asked the White House to remove their names from consideration 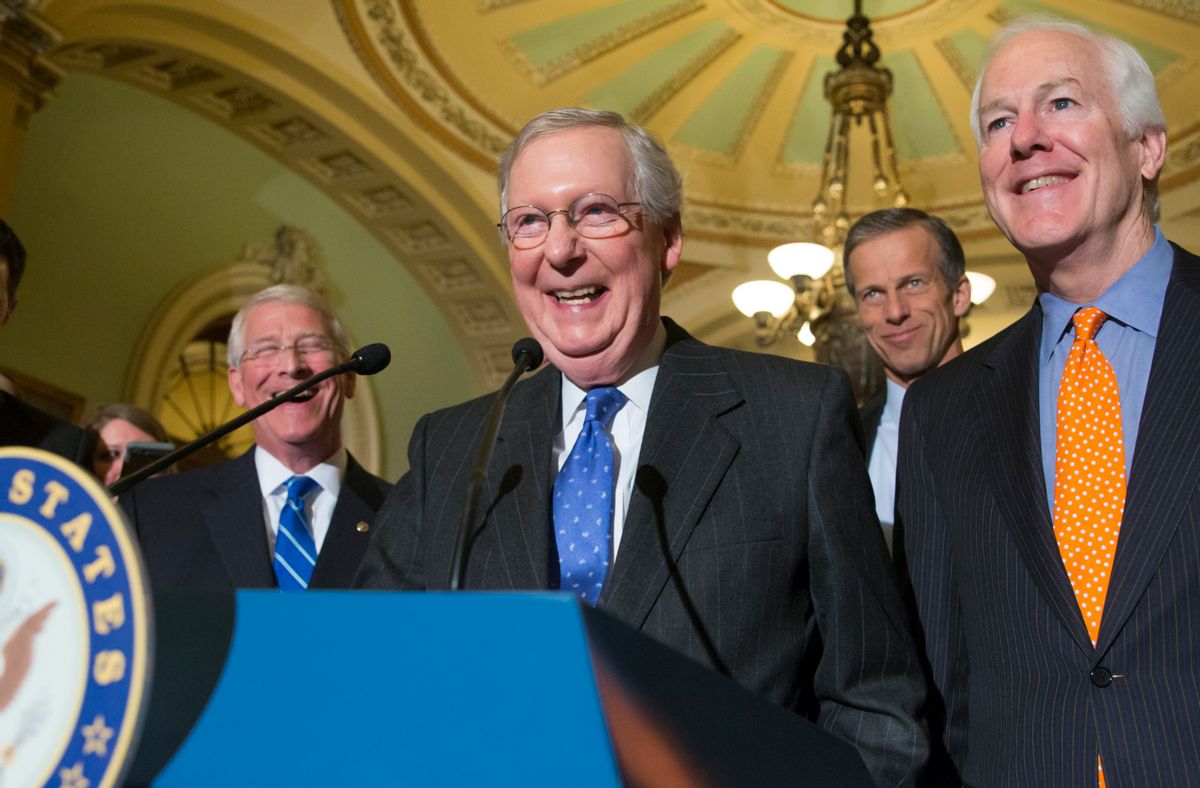 Senate Republicans are already having a banner week for proud obstructionism. As voter prepared to eventually vote for Donald Trump and Bernie Sanders in the Michigan primary earlier this week, Utah Republican Senator Mike Lee boldly defended his personal crusade to block federal relief funds for the residents of Flint, citing tired Republican dogma that federal intervention can only cause more harm.

“If we create a precedent that suggests any time there’s a significant problem with a locally operated utility that operates entirely intrastate,” Lee shamelessly said, “I would ask, where’s the stopping point? What’s the limit?”

As if the poisoning of American children isn't the worst time to bring up a pointless philosophical argument, now Lee's Republican leadership in the Senate are openly using bully-like taunts to threaten against any action on a potential Supreme Court nominee to replace recently deceased Justice Antonin Scalia.

The number 2 Republican in the Senate is doubling down on Republicans' longstanding pledge to block any potential nominee and is now sending the message that anyone who dares to attempt to fill the Supreme Court vacancy will face the full wrath of the obstructionist GOP.

"I think they will bear some resemblance to a piñata," Senator John Cornyn of Texas recently told a group of reporters about any potential hearings. On Thursday, Senate Judiciary Committee Chairman Chuck Grassley seemed to concede a bit from his implacable position to announce that the Committee will have a “full-blown debate” Thursday on whether to even hold a hearing on a Supreme Court nomination.

But Cornyn, a member of the Judiciary Committee, still wants to scare off any movement on the front. "What I don't understand is how someone who actually wants to be confirmed to the Supreme Court would actually allow themselves to be used by the administration in a political fight that's going to last from now until the end of the year," Cornyn said on Monday.

Arizona Republican Senator John McCain echoed Cornyn's comments this week, boasting that Nevada Governor Brian Sandoval quickly called for his name to be removed from consideration after the Republican governor was floated in the press as a possible replacement.

“I notice the governor of Nevada quickly removed himself from consideration, showing there are no dummies in Las Vegas. They know the odds,” McCain joked.

White House press secretary Josh Earnest slammed Cornyn’s language on Tuesday, joking that it “sounds like he might spend a little too much time watching Donald Trump rallies.”

Senate Minority Leader Harry Reid jumped on the Trump analogy as well, accusing Judiciary Chairman Grassley of "allowing himself and his committee to be manipulated by the Republican leader for narrow, partisan warfare ... taking his orders from the Republican leader and, sadly, Donald Trump."

"Donald Trump on this issue, when asked about it, his words were three: 'Delay, delay, delay,'" Reid said from the Senate floor, in a speech blasting the GOP obstruction. "Grassley must have been listening."