Trump's hands. Mitt on his knees. Cuckservatives. What the party's junk obsession says about 2016 Republican Party 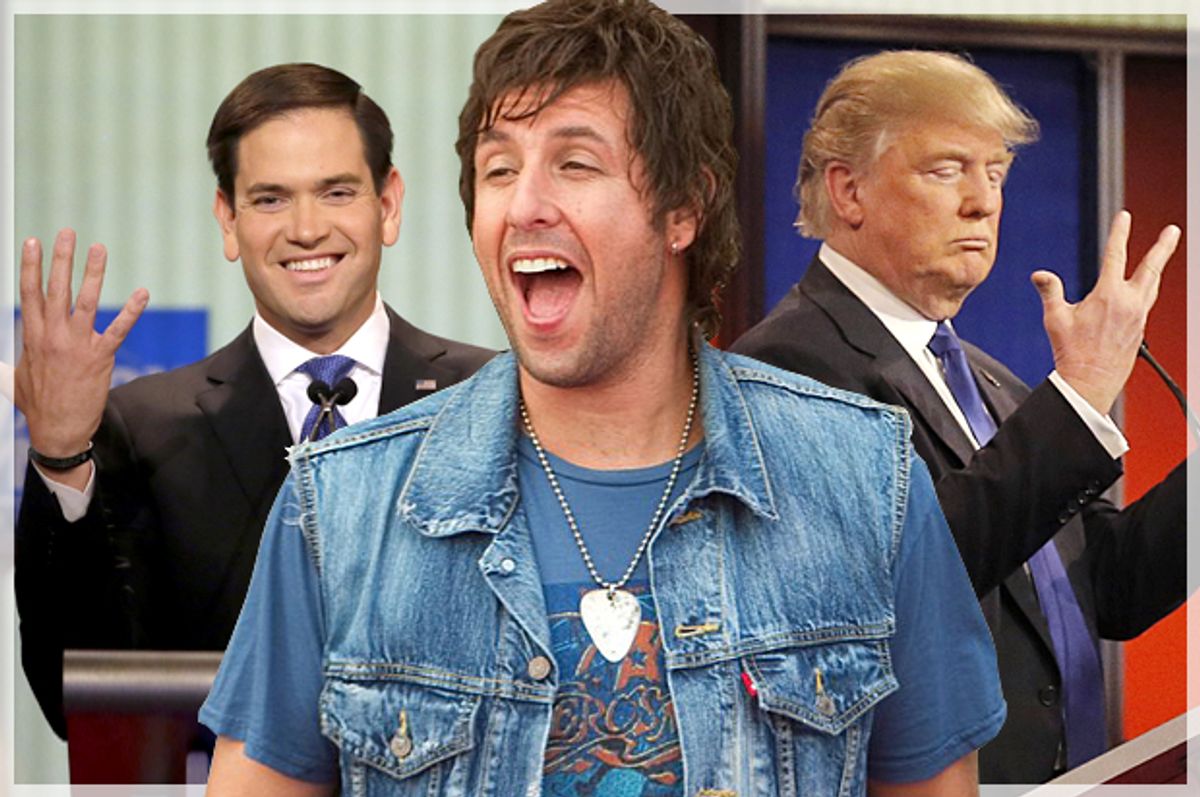 The 2016 Republican presidential primary campaign is like an Adam Sandler movie.

The characters include a somnolent black brain surgeon, a robot who thinks he is a man, a Christian fundamentalist, and a reality TV show host billionaire who acts like a professional wrestler.

The jokes and humor in this movie are scatological (Rubio’s comments about Trump urinating on himself during one of the debates), infantile and base (Trump suggesting that Megyn Kelly was menstruating). This movie also features insults and putdowns about penis size (Rubio’s suggesting that Donald Trump has small hands and thus a small penis), forcing other men to perform fellatio (Donald Trump saying that Mitt Romney was on his knees in front of him and was willing to do anything), and anxieties about being made to watch one’s wife have sex with a (black) man who has a large penis (the right-wing chattering classes’ recent worries about “cuckservatives”).

These are the ultimate bons mots, quick-witted insults between the characters.

Beer-pong-playing frat boys consider it all sophisticated high art; people with any semblance of taste are disgusted by it all.

Unfortunately, the 2016 Republican presidential primary is not a work of fiction penned by Adam Sandler. It is a campaign to nominate a candidate who could potentially become the most powerful person in the world.

Some observers have keyed in on how the behavior of Donald Trump and his Republican rivals is a sign of a political movement in disarray. Elias Isquith has described this political moment as close to being a “nadir of modern American politics.” Both are accurate diagnoses. Other analysts have assessed the drunken frat boy and childlike antics of Trump, Rubio, Cruz and company in terms of “temperament” and their ability to behave in a “presidential” manner. It is true that comportment is an important element of presidential leadership.

These are all reasonable concerns.

But, the Republican candidates’ obsession with penises is a symptom of something much more serious and worrisome about the health of America’s political culture, in general, and today’s version of conservatism, more specifically.

As detailed by political scientists Jonathan D. Weiler and Marc J. Hetherington, authoritarian political beliefs and behavior are on the increase among the American people. The wrecked economy, non-responsive elected elites, a political economy gamed to the near exclusive advantage of the 1 percent, and the right-wing news disinformation entertainment complex has encouraged radicalism among American conservatives.

In this sea of broken politics, Trump’s supporters are a stark example of the authoritarian turn in American society. The Washington Post offers a worrisome description of this moment:

Does authoritarianism, the scientists asked, correlate with support for Trump? Polling data not only said yes, they concluded, but also suggested that this characteristic was more reliable a predictor than virtually any other.

Trump, according to the Vox article, embodies the leadership style most desired by these authoritarians: “simple, powerful and punitive.” ...

Trump is, however, the embodiment of what they think is needed to suppress the dangers and halt the damage — threats and changes such as the Islamic State, Russia and Iran; the erosion of traditional gender roles; immigration; the browning and blackening of the United States; and the disruption of once well-established social hierarchies.

Trump’s authoritarian supporters believe he can “take back America” and protect them from a scary world.

Conservatism, as a right-wing ideology, is centered on the “strong father” image. Cognitive scientist and sociolinguist George Lakoff explains this as:

In the strict father family, father knows best. He knows right from wrong and has the ultimate authority to make sure his children and his spouse do what he says, which is taken to be what is right. Many conservative spouses accept this worldview, uphold the father’s authority, and are strict in those realms of family life that they are in charge of. When his children disobey, it is his moral duty to punish them painfully enough so that, to avoid punishment, they will obey him (do what is right) and not just do what feels good. Through physical discipline they are supposed to become disciplined, internally strong, and able to prosper in the external world. What if they don’t prosper? That means they are not disciplined, and therefore cannot be moral, and so deserve their poverty. This reasoning shows up in conservative politics in which the poor are seen as lazy and undeserving, and the rich as deserving their wealth. Responsibility is thus taken to be personal responsibility not social responsibility. What you become is only up to you; society has nothing to do with it. You are responsible for yourself, not for others — who are responsible for themselves.

As a corollary to the “strong father” image, fascism is a very “masculine” political ideology.

The phallocentric language and penis obsessions of the Republican Party’s presidential candidates are a reflection of that aspect of fascism—one that Trump and his “Trumpeteers” manifest in the extreme.

Donald Trump’s obsession with his “vitality” and energy is part of the strong man-charismatic personality routine that petit dictators and other autocrats project to legitimate their rule. A ruler’s power in a fascist State is prefaced on this routine. As such, it was common to Hitler’s Germany, Mussolini’s Italy, and other fascist countries as well.

Donald “Il Duce” Trump uses this energy and performance style to hypnotize his base and intimidate rivals—with the latter now being coded as “feminine” and “weak,” and he, the ruler, being sexually potent, vital and full of energy.

Fascism’s phallocentrism and masculine energy manifests itself as anti-feminine, a retreat from the realm of the sensual, and misogynist.

Consequently, the Republican Party’s desperate efforts to overturn Roe v. Wade, support for invasive procedures such as “transvaginal ultrasound,” the lie and conspiracy driven assault on organizations such as Planned Parenthood, and a defense of “traditional marriage” and “family” are efforts to assert right-wing authoritarian male desires on women (and those others) who are identified as “deviants.”

Until they have exclusive control over their own reproductive choices, women cannot be fully free and equal to men; fascism demands female conformity and subordination to men’s desires. Contemporary American conservatism takes the second as normal and is terrified of the former.

R.W. Connell offers a devastating description of this dynamic in his book "Masculinities":

In gender terms, fascism was the naked reassertion of male supremacy in societies that had been moving toward equality for women.  To accomplish this, fascism promoted new images of hegemonic masculinity, glorifying irrationality ("the triumph of the will,” thinking with “the blood") and the unrestrained violence of the frontline soldier.

Militant nationalism and obsessions with guns and vigilante violence are also features of fascism with its phallocentric obsessions and toxic masculinity: The Republican Party’s leading 2016 presidential candidates and opinion leaders channel those attributes as well.

Donald Trump has boasted about being a Dirty Harry-like figure who could kill “bad guys” in the street with impunity and ease. Trump, Rubio, Cruz and other members of the 2016 GOP human zoo have talked about carpet bombing ISIS and killing thousands (millions?) of innocent people in order to defeat “America’s enemies.” Trump has even gone so far as to suggest that he would violate international law and punish the “savages” in ISIS in ways that would make waterboarding look benign by comparison.

The Republican Party is enslaved to the National Rife Association and its propaganda, which furthers a fever dream that firearms, white masculinity and citizenship are inexorably linked in a knot that can never be undone—even while gun violence is one of the greatest public health problems in the United States.

Almost to the one, the Republican Party’s 2016 candidates say that they will expand American empire, give more money to a bloated and wasteful American military, and use force to intimidate America’s “enemies” so that, to paraphrase Donald Trump, “they are too scared to mess with us ever again.”

Fascism is also oriented around social dominance behavior and hostility to groups defined as some type of Other. Fascism (as a variant of authoritarianism) polices the boundaries of political community and is strict in how it allocates resources between those identified as “deserving” and those who are “less deserving” and/or “the enemy.” For the Republican Party since the end of the civil rights movement and to the present, this tendency has been actualized by the anti-black Southern Strategy; a racist, sexist and classist assault on the social safety net; hostility to gays and lesbians; anxieties about “Arab” and “Muslim” terrorists; and anger toward non-white, i.e., Hispanic and Latino immigrants.

Donald Trump threatens the Republican Party’s elites because he has unmasked the racism, white supremacy, nativism and xenophobia of the modern GOP. Trump will not be silenced because he and his public have little if any use for racist “dog whistles” in their full-on assault against “political correctness” and “the establishment.”

Trump’s proto fascist right-wing producerism is also a threat to Republican Party orthodoxy. Like the type of “socialism” practiced by the Nazis, Donald Trump wants to ensure that the in-group has access to resources from the State (healthcare, jobs, improved infrastructure) that are denied to the Other. The Republican Party’s elites want to destroy the social safety and government support for most Americans (the white middle and working classes will be given some resources only as a means of leveraging their anxieties against people of color and the poor). Trump offers a different vision: He will maintain the submerged state and other benefits for whites, and those others he identifies as “real Americans” and “deserving,” while unapologetically denying them to those individuals and groups whom the “Trumpeteers” want to dominate and abuse with impunity.

I have written numerous essays on the rise of Donald Trump and his proto-fascist movement here at Salon and elsewhere. There, I explained how his oeuvre and performance style are copied from professional wrestling. I have also tried to show how Trump’s power is directly connected to the death anxieties of the white working class. Up to this point, I have tried to dance around allusions to Nazism. After seeing the escalating violence at Trump’s rallies, as well as how unrepentant white supremacists such as David Duke have endorsed him, such caution must now be thrown aside.

Denial will not save us. America’s political institutions and traditions will likely immunize us against the mass appeal of Donald Trump’s dangerous type of right-wing populist. His supporters will still be here. Generational replacement will likely remove many of them from our midst in the years to come. Nevertheless, Donald Trump’s popularity is a reminder of how America is not as “exceptional” as many of us would like to believe. The American Il Duce Donald Trump and his supporters are a cancer. I worry about how, and if, the American body politic is properly equipped to fully purge them…the next few weeks and months will hold the answer to that question.