The N-word, in terrible context: Period pieces "Hap and Leonard" and "Underground" expose the long roots of racism

The Underground Railroad and Reagan's America are the backdrop for TV's newest, unlikeliest history lessons 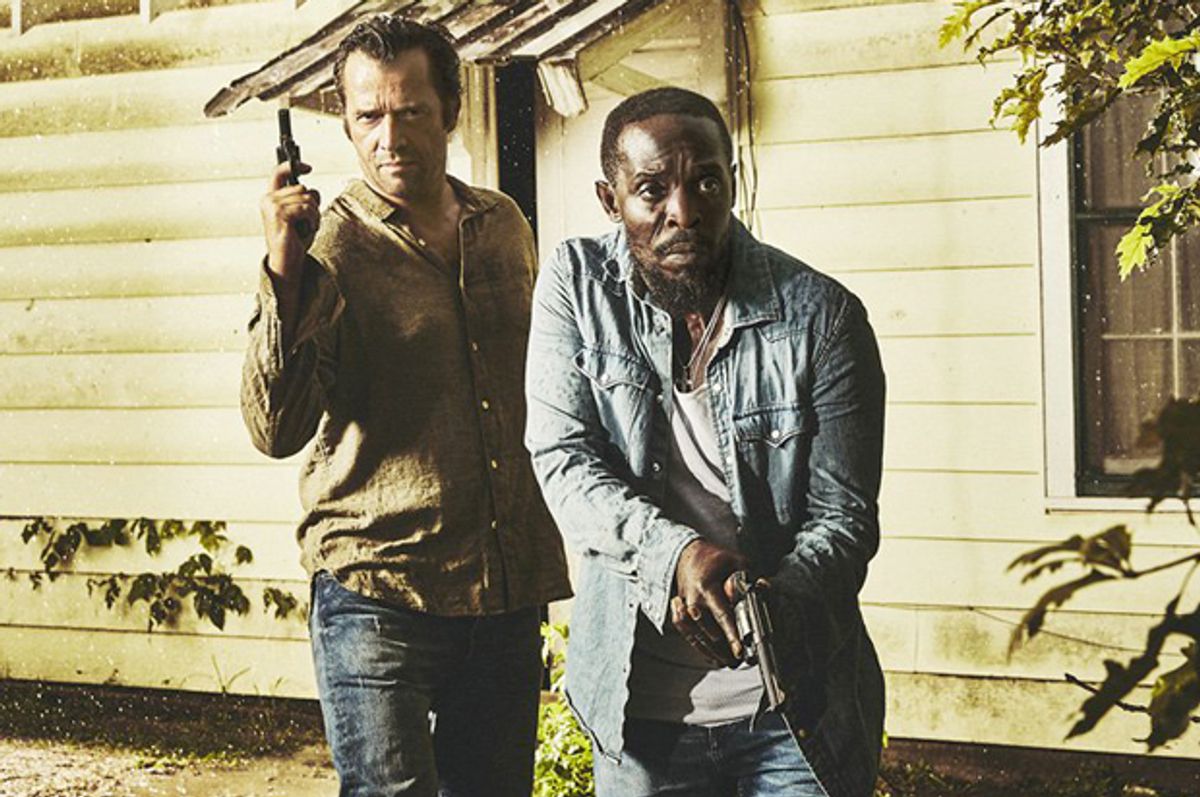 It is—or it should be—extremely startling to hear a white person use the N-word in 2016. Weirdly, this month on television, there are a lot of opportunities to hear just that. Last night, for example, on “The People v. O.J. Simpson: American Crime Story,” F. Lee Bailey (Nathan Lane) asked Mark Fuhrman (Steven Pasquale) if he’s ever used the slur, and in asking says the word, dispassionately, six separate times.

But, of course, that scene comes from the real-life incident where Bailey asked Fuhrman those questions from the staid chambers of a courtroom in 1995, broadcast nationally to audiences everywhere. Sitcoms from “All in the Family” to “Black-ish” have devoted space to exploring the impact of the word, and network dramas have found a way to incorporate the slur into their own Very Special Episodes, as Josh Kurp details.

But the preponderance of uncensored cable television has ushered in a new era of televisual profanity, and though shows like “Oz” and “The Wire” have gone whole-hog with every kind of insult, slur and derogatory phrase, there is something different about the language in two new cable shows: “Hap and Leonard,” on SundanceTV, and “Underground,” on WGN. Both shows are period pieces in the South, though of very different eras. “Underground,” which debuts tonight, takes place in plantation-era Georgia, and most of the characters are enslaved. “Hap and Leonard,” which debuted last week, takes place in East Texas in the ‘80s, at the height of the Reagan administration. And in both, the black leads are pointedly subject to racist language, including copious use of the N-word.

It’s not pleasant, but it goes a ways toward exposing the long roots of racism in America. That a few assholes in the ‘80s would be fine with throwing the word around while pointing a gun at Leonard (Michael K. Williams) is perhaps not surprising. But watching the look on Leonard’s face as the scene unspools is surprising; the typically brash, shit-talking drifter is stunned into a self-preserving silence, and even his stance seems to diminish, shrinking into himself as the scene continues.

“Hap and Leonard” is a type of television show that would be, in many other iterations, not much to comment on. The show is based on the mystery novels of Joe R. Lansdale, and as so many mystery stories do, takes the procedural structure as an excuse to spend a lot of time with its characters and its setting. The six episodes of the first season have the characters trekking through swamplands, encountering gators, skeet shooting, and listening to country-western LPs. It is normal in every way, and also, Leonard is a gay black man. And this willingness to, for lack of a better descriptor, go there is what makes the show strangely addictive and memorable, just in the way a particularly compelling mystery novel is. There’s a degree of formula at work, but at the same time, an enticing wrench thrown into the works.

Similarly, “Underground” has a certain degree of formula at work, albeit in what is a far more controversial and revolutionary setting—the Underground Railroad, in the late 1850s, in the shadow of the controversial Dred Scott v. Sanford case that denied citizenship to African-Americans. This is not, exactly, the bleak plantation life of “12 Years a Slave,” but it is not the sunny view of antebellum South depicted in “Point of Honor,” either. Instead, “Underground” approaches overthrowing slavery with a sense of vim and vigor that it is normally denied—infusing the characters’ struggles to escape their oppression with the righteous indignation of any adventurers fleeing their particular dystopia. This is aided by the soundtrack, which incorporates modern hip-hop and period-appropriate spirituals in equal turns.

It is the type of cross-genre historical-ish drama that fuels the campy fun of “Sleepy Hollow” and “Reign,” in that it is a bit more invested in the splash of its plot twists than in the resonance. The difference is that “Underground” is the first show to use slavery and the Underground Railroad as its setting; it has available to it an entire resonant system of symbols that have yet to be turned into television. Much like “Hap and Leonard,” the fascinating element of this show is that it is willing to expand its lens of empathy beyond the usual suspects; and indeed, it’s that quality that is the best part of both shows, what makes them stand apart from their formulaic underpinnings. When the N-word is used in “Underground,” it is dropped in the casual invective of the white person; it permeates the landscape and peppers the foreground, re-creating a terrible power structure with mere language.

Partly, the N-word is on television more than ever just because it can be said on cable. But partly, it is that there is an expanded slate of programming featuring black characters—characters who, crucially and obviously, encounter racism. It is just a word, but it has broad implications for how to think about the past. And that does make quite a difference when thinking about the future.