The government's iPhone-cracking crusade is getting even creepier

During testimony before Congress yesterday, Attorney General Loretta Lynch made some troubling comments 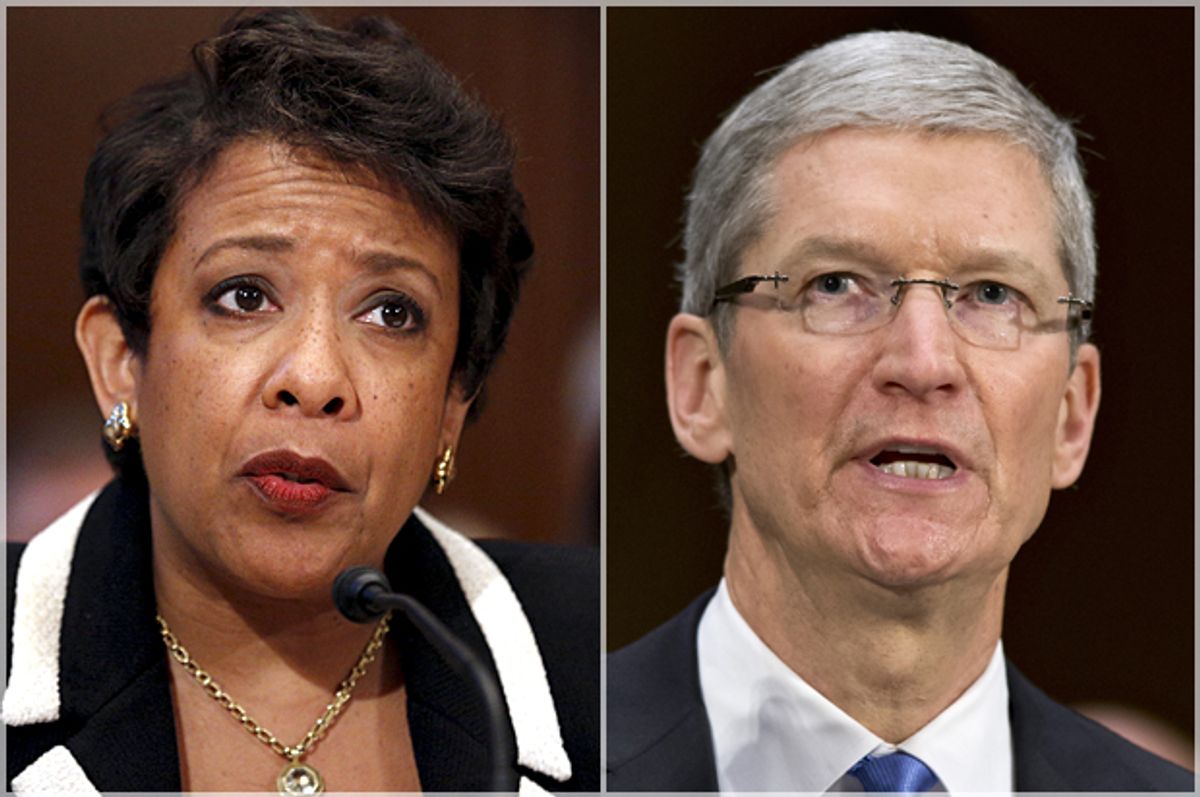 Top DOJ officials continue to make questionable claims in their pursuit of forcing Apple to help them hack the phone of San Bernardino shooter Syed Rizwan Farook. This time, during a congressional hearing on Wednesday, Attorney General Loretta Lynch made several dubious claims in an attempt to rebut Utah Senator Mike Lee's arguments that DOJ was overstepping the law. Even so, Lynch's truthful claims were even more worrisome than her less truthful ones.

The spat came when Lee pointed out that the All Writs Act -- the 1789 law the government says allows it to force Apple to write a new operating system to disable existing security features on Farook's phone -- only permitted the government to do things within the law. But since an existing law, CALEA, affirmatively did not limit what telecommunications equipment manufacturers could do, nor did it require they decrypt data they don't have the means to decrypt, Lee argued, DOJ's request was improper. That's all the more true given that Congress considered, but then chose not to amend, CALEA to put obligations on companies like Apple.

"Now that Congress has declined to adopt such legislation," Lee accused the government, "then and only then, the government goes into court" to seek "a remedy that it could not get through Congress."

Lynch said a number of things in an angry retort. First, she claimed DOJ hadn't tried to use All Writs Act after Congress failed to act. "Most respectfully sir," claimed the Attorney General, "we did not wait for Congress to stop considering this issue to bring this court action." In fact -- as the judge in a Brooklyn made clear in an order refusing another All Writs Act -- on the very same day Jim Comey told this same committee the Administration did not need a law facilitating access into handsets, it asked for two separate All Writs Act order to do just that.

"It is also clear that the government has made the considered decision that it is better off securing such crypto-legislative authority from the courts (in proceedings that had always been, at the time it filed the instant Application, shielded from public scrutiny) rather than taking the chance that open legislative debate might produce a result less to its liking," wrote Magistrate Judge James Orenstein in a February 29 order.

"Indeed," Orenstein continued, "on the very same day that the government filed the ex parte Application in this case ... it made a public announcement that after months of discussion about the need to update CALEA to provide the kind of authority it seeks here, it would not seek such legislation."

The San Bernardino order was just one of about a dozen such orders DOJ asked for, mostly in the wake of public claims by the administration that they didn't need such legislation.

Lynch said something else funny in her rebuttal to Senator Lee. After saying earlier in the exchange that "This is a customer request for a company to provide assistance to a customer," Lynch likened the demand on Apple to the FBI requesting a desk manufacturer open a drawer. "The same way, if we needed to get into that person's desk, or locker, we went to the owner of it, and if they had had to go to the manufacturer to gain access, to help us gain access to a locked device in a way that would not destroy what was inside. That's the situation here."

The comment is just bizarre, for two reasons: First, FBI doesn't go to desk manufacturers -- or even safe manufacturers -- for help breaking inside them. They just crack the safe themselves. And one criticism experts have about the FBI's request in this case is that FBI didn't do everything it could to break into the phone itself.

The analogy is even more weird given that, had either San Bernardino (the customer in question) or the FBI asked for Apple's help with this phone at the same time Apple was already providing the FBI with other kinds of data for the investigation, Apple would have prevented them from screwing up, by changing Farook's password, which would have made it very easy to obtain the data in question. Lynch may want to emphasize this is a customer request to (correctly) emphasize that Farook has no Fourth Amendment interest in this phone, but that only highlights the FBI's seemingly willful incompetence that has created the need to break into the phone in the first place.

As I said, though, Lynch's completely truthful comments were even more disturbing than these dubious ones. In response to Lee's larger question -- whether there was any limit on what the FBI might ask judges to force companies to do -- Lynch basically confirmed Orenstein's claim that the Administration has decided it will pursue new policy in secret court orders. She asserted that how companies can provide assistance "will be determined and I feel should be determined by the courts in every specific case when there's a valid law enforcement interest to do so." So there is no limiting principle. If FBI can convince a magistrate, who wouldn't benefit from any adversarial proceeding, to turn on the microphones on a customer's phone (one of the examples raised by Lee), that's perfectly legitimate under Lynch's argument.

Which may be why the Attorney General described the larger move -- of demanding companies weaken their products even though CALEA says the government doesn't have that authority -- as an obligation. "We have a law enforcement obligation to proceed," she claimed.

Last I checked, even DOJ had an even bigger obligation to follow the law. Attorney General Lynch seems to think that obligation doesn't apply for secret court proceedings.