Obama diagnoses Trumpism: The president swats down the notion that Trump is somehow his fault

Barack Obama makes the wild and crazy argument that maybe, somehow, Republicans are to blame for Trumpism 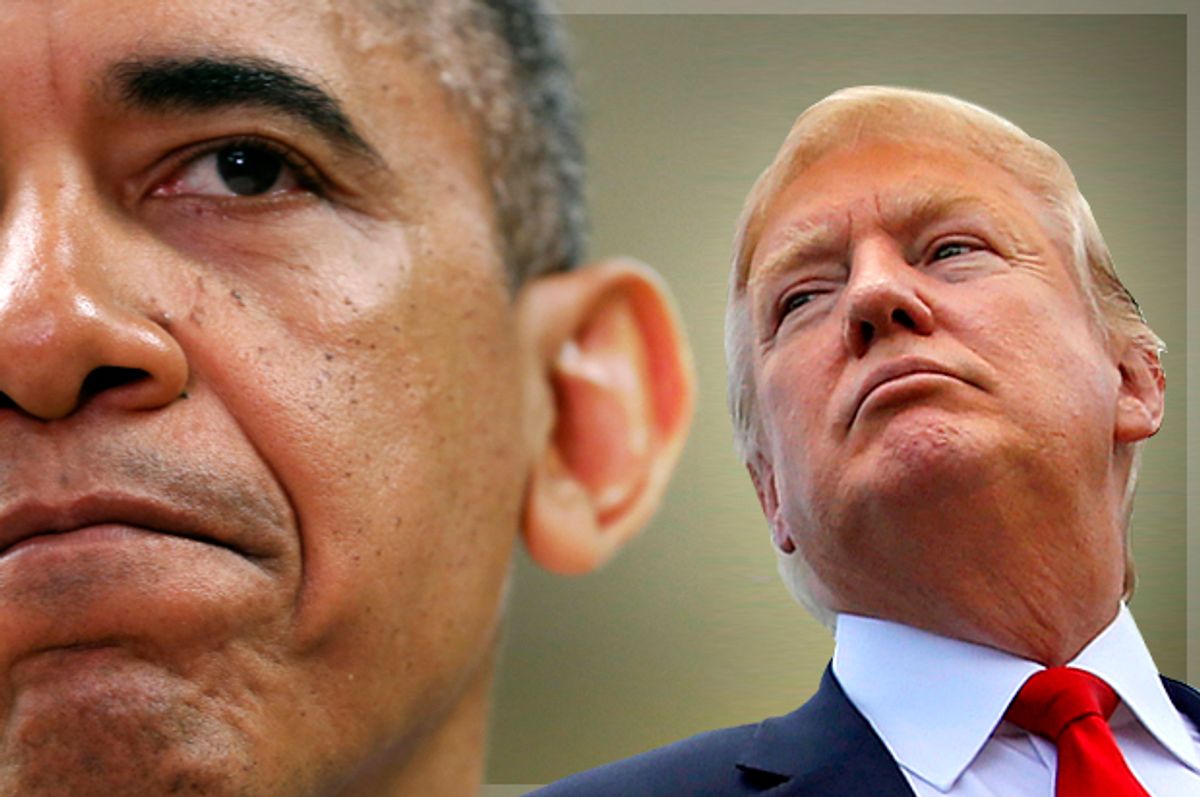 There’s only one thing that frightens conservative and Republican elites more than Donald Trump’s unstoppable metastasis throughout the Republican Party: the ugly truth that they are responsible for creating the conditions in which he is thriving. There’s a strong current of denialism among Republicans and conservative pundits as they struggle to explain the rise of Trumpism while begging off culpability for nurturing and enabling the xenophobia and nationalism that power the Trump movement. It’s much less traumatic for them to push blame off onto an external actor, someone who managed to corrupt the movement from without. The outside agitator they’ve settled on is, predictably, Barack Obama.

You see it everywhere – Trump is a reaction to Obama’s weakness and detachment, Trump was spawned by Obamacare’s party-line passage, Trump is the product of Obama’s liberal politics, etc. The moderately liberal Democratic president is presented as the most influential figure in conservative and Republican politics, while the actual leaders of the movement and the party are little more than witnesses to its collapse.

It’s fanciful nonsense that has been debunked more times than should be necessary, but this ridiculous theory managed to bubble up all the way to Obama himself this week. At a press conference with Canadian Prime Minister Justin Trudeau, the president was asked by a reporter about this idea that he bears ultimate responsibility for Trump. Obama rightly dismissed the idea as laughable and placed blame where it belongs: on the Republican leaders who prioritized obstruction over governance and surrendered their agenda to extremists within the party. But he also made a sharp observation about how Trumpism fits in with mainstream Republican politics.

Here’s what Obama said about Trump and the rest of the GOP field, highlighted for emphasis:

OBAMA: He’s just doing more of what has been done for the last seven and a half years. And, in fact, in terms of his positions on a whole range of issues, they’re not very different from any of the other candidates. I mean, it’s not as if there’s a massive difference between Mr. Trump’s position on immigration and Mr. Cruz’s position on immigration. Mr. Trump might just be more provocative in terms of how he says it, but the actual positions aren’t that different. For that matter they’re not that different from Mr. Rubio’s positions on immigration, despite the fact that both Mr. Cruz, Mr. Rubio, their own families are the products of immigration and the openness of our society.

This is key to understanding both how Trump came to dominate the GOP and why it’s so difficult for the Republican establishment to take him down. The immigration example Obama used is a fine place to start. Consider the arc the Republican establishment has followed on immigration policy over the past three years. In 2013 the party rallied behind an effort to pass comprehensive immigration reform with a path to citizenship. It was blocked by conservatives in the House, and ever since then the party has shifted further and further rightward, promising to “enforce our laws” and put “border security first.” Trump, as Obama notes, promises the same things, but he doesn’t futz around with euphemisms; he’s just going to build a big-ass wall and kick out all the immigrants. Republicans spent years priming their base to respond to this message, only to have Trump swoop in and hijack it for his own purposes.

The same principle applies when it comes to terrorism. Consider something Trump said this week that stirred up a bit of controversy: He was asked by Anderson Cooper if he believes “Islam is at war with the West,” and Trump’s response was: “I think Islam hates us.” Trump’s comments were controversial because they were so blunt and sweeping, but they weren’t too far removed from the euphemistic language a candidate like Marco Rubio uses when he talks about terrorism. Following the Paris terror attacks, Rubio described the conflict with the Islamic State as a “clash of civilizations,” and scoffed at remarks from Hillary Clinton in which she denied that the U.S. is at war with Islam. “That would be like saying we weren’t at war with Nazis because we were afraid to offend some Germans who may have been members of the Nazi Party but weren’t violent themselves,” Rubio said. Trump came under fire because he said directly what Rubio used indirect language to imply.

That’s why it’s so silly to suggest that Trumpism is ultimately Obama’s fault. Trump succeeds because he appeals to the same senses of xenophobia and grievance that mainstream Republicans have been nurturing for years. He’s just figured out how to beat the Republicans at their own game.