Samantha Bee is Jon Stewart's real heir: Finally, the 2016 campaign has the satirist we so desperately need

Noah's "Daily Show" is toothless, Colbert's playing to the masses on CBS. Samantha Bee is taking down the right 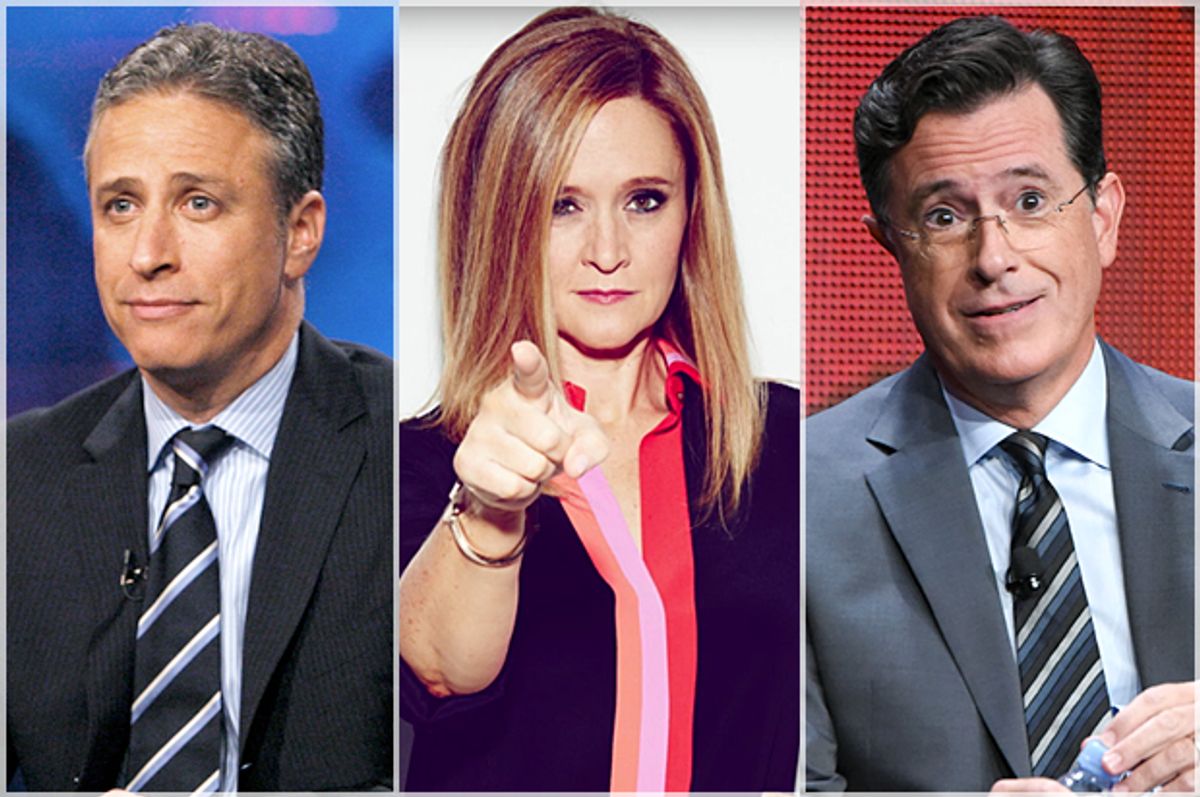 Ever since Stephen Colbert retired his pundit persona and went over to host “The Late Show” on CBS and Jon Stewart passed his job as host of “The Daily Show” to Trevor Noah, we have all wondered who would step up to fill the void.

Stewart and Colbert were arguably the two most important political comedians in our nation’s history. They played a crucial role in helping the U.S. public navigate the post-9/11 meltdown when bluster and hype took over for reason and logic.  They offered sharp satire in the face of stupidity and evil.

So we all had reason to worry when they left us as we entered into the current presidential race—a race that continues to astonish and continues to demand the satirical insights of irony, wit, parody and puns. That was at least until Samantha Bee entered the fray.  Her new TBS show “Full Frontal” promises to offer the exact sort of political comedy this electoral race demands.

Sure, Colbert has not abandoned his role as a political satirist, offering weekly interventions that are both funny and sharp.  And sure we still have “The Daily Show,” but with Trevor Noah at the helm, the best segments have come from the show’s correspondents. And then there’s John Oliver, whose “Last Week Tonight" continues to offer fresh and insightful political comedy.

The finest TV satire thus far this electoral season has come from Larry Wilmore on “The Nightly Show” and Lee Camp on “Redacted Tonight.” They each balance their comedy with well-founded frustration at the political circus and the media spectacle that feeds off of it.

While Wilmore brings much-needed attention to identity politics and Camp underscores the ties between capitalist greed and the U.S. political oligarchy, it is Bee who is offering the edgy, angry, smart satire that is the perfect foil to this election. Bee’s comedy trades in a sharp use of language and a refusal to let the prevailing mainstream narratives hold sway.

Her irony is like a dagger that jabs right into the exact spot we need it most. On her first show she began: “People, I have to be honest with you. We wrote like two hours of jokes about Democrats but we had to throw them all out because then the Republicans laid out a banquet of all-you-can-eat crazy.” The thing is, that sort of statement has been said by plenty of folks –comedians and otherwise.  But Bee’s delivery had the right ironic, snarky tone to jolt an audience that had likely become numbed to our political reality.

Much will be made of the fact that Bee broke into the boys club as the first female comedian to host a late-night comedy show. And her success as a female comedian is significant. But the reason Bee’s show is so important is because of her mode of humor, not her gender.

Her show has a healthy dose of feminist comedy, but arguably she doesn’t have to be a woman to offer that. Camp recently did a smart segment on sexism, for instance. Bee’s feminist interventions are important because they are the perfect balance of angry, ironic and smart.  Focusing less on the hypocrisy and “bullshit” that was often the target of Stewart, Bee zeroes in on how hypocrisy is used to cover up injustice. And she takes the characteristic WTF of Stewart’s comedy to a whole new level.

With “Full Frontal” Bee plays with the double meaning of the term—swapping the vulnerability and sexual objectification of full frontal nudity with a full frontal assault. Given the stakes in this election campaign and the real possibility that we could have a commander in chief with absolutely no experience in either government or the military, Bee’s satire-as-attack is exactly what we need to expose the stakes in this electoral war.

Already after only two shows she has completely dismantled the pro-life insanity of candidates like Ted Cruz and Marco Rubio. On her first show she referred to Rubio’s pro-life stance as “literally the stupidest thing I've ever heard” and backed by a “cabal of fetus fanatics.”

One her second show, she highlighted the fallout after the unexpected death of Supreme Court Justice Scalia. Puzzling over the idea that the Republicans would ignore the Constitution so that they could block a new nominee, Bee exclaimed that Mitch McConnell wants to “have a Supreme Court vacancy for a year because some chinless dildo wants a justice who will use his gavel to plug up your abortion hole.” Again the power of Bee’s takedown of the GOP stance is the fact that, even though her metaphors are graphic, she is exactly on point. Our nation is literally under attack from these loons. Bee is fighting back using irony and wit to challenge stupidity and hubris.

While Bee joins the ranks of a growing number of high-profile female comedians, apart from Tina Fey’s brilliant impersonation of Sarah Palin, Bee is the most noteworthy for being a strong female comedian who works in political satire.  Many will recoil from her vulgar language, but she is certainly not the first female comedian to cross that line. Instead, what makes her use of language so sharp is her flat-out refusal to sugarcoat what she is saying.

On her first show she screened a sound bite from Cruz’s victory speech on Feb. 1 in Iowa and then the camera cut to Bee tying a noose. Now Colbert loves to play with props, but it's unlikely he would make that sort of dark move. Viewers couldn’t tell whether Bee was preparing the noose to kill herself or Cruz, but either way the idea that this is an election that might lead to suicide or homicide is a point we would not likely see from the likes of Colbert, Stewart or Oliver. The best part of the bit was when her anger overcame her and she dropped the noose to harangue Iowa Republicans for selecting “fish-faced, horseshit salesman Ted Cruz as their new prized heifer.”

Can you imagine either Stewart or Colbert ever saying something quite that edgy? Bee’s comedy has taken U.S. political satire to a whole new level and she has done it just when we needed it most. In an election cycle where GOP candidates speak at a fourth grade level, insult each other regularly, lie almost constantly, and compete at who can be the biggest bigoted, racist chauvinist, Bee’s full-frontal comedy offers us the righteous, angry satire we need.

This, of course, is why many are dumbfounded that she wasn’t offered the chance to host “The Daily Show” after Stewart’s departure. With 12 years as a successful correspondent, she was a logical choice. After only two episodes aired Bee is hitting the ground running and shaming all of Noah’s supporters who have been whining that he needs time to settle into his new job and that he shouldn’t be expected to be Stewart. Noah grins and looks bewildered on set still, while Bee walks her set with confidence after only two weeks. More important, her show is her own unique brand of comedy. It’s not a derivative of “The Daily Show.”

Even better, Bee is really pissing off the right. Newsbusters has a stroke every time she airs.  They have referred to her as “vile,” missing the point that it is what she is mocking that is actually vile.

As we embark on this electoral cycle missing the comedic duo of Stewart and Colbert, we can be thankful that Bee’s “Full Frontal” will give us a satirical outlet to get through “the most deranged electoral shitshow in a generation.”