"You don’t mix oral sex and cancer and death": Julie Delpy on the line between the crude and the absurd in her new movie "Lolo"

Delpy talks about directing, her love of "goofball" humor and the plight of women over 40 looking for a man 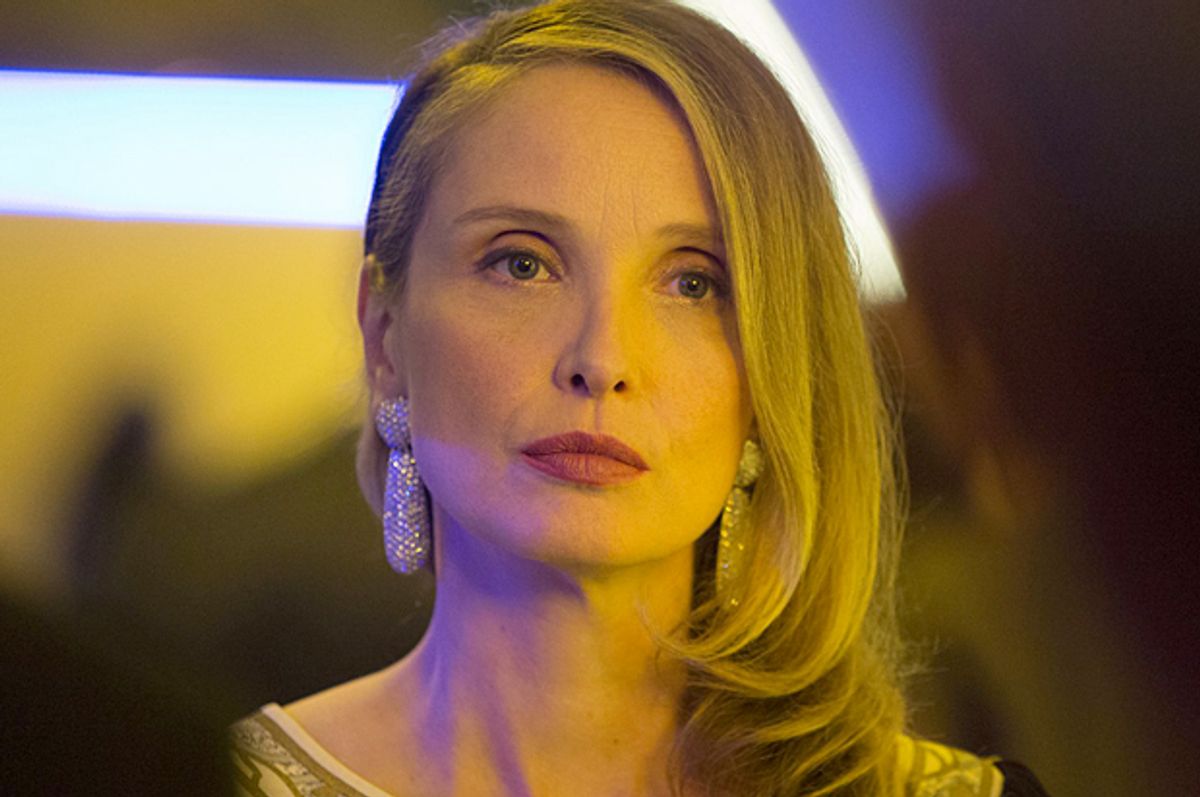 Julie Delpy charmed audiences playing Celine in “Before Sunrise,” “Before Sunset” and “Before Midnight.” This French-born actress/writer/director also charmed viewers with films such as “2 Days in Paris” and “2 Days in New York.” In her latest film, the breezy “Lolo,” the talented Delpy writes, directs and stars as Violette, a 45-year-old mother of 19-year-old Eloi, aka “Lolo” (Vincent Lacoste). Violette and Jean-René (Dany Boon) meet cute on a spa vacation—he drops a tuna in her lap—but soon they get serious. Back in Paris, Violette and Jean-René get so serious Lolo gets jealous. He is determined to sabotage his mother’s happiness by humiliating her boyfriend so he can have her all to himself.

The actress/writer/director recently chatted with Salon about comedy, parenthood and making “Lolo.”

What prompted you to make this film? Is it based in truth, or your experiences (or fears) of motherhood? Has your son tried to sabotage your relationships?

My son is 7. It’s not at all autobiographical. My son is the opposite of Lolo, who’s a sociopath. My son is the most loving and caring human. When you are a parent, you want to give your children love, but I see friends who give their kids all their love and the best education, and the children turn out to be bad seeds. What did they do wrong? They question themselves. Some people do all those things and it turns out great, too. It’s a complex thing to raise children. As a parent, it’s about how do I make a child functioning and happy?

Given your screen role of Celine in the “Before” movies and Marion in the “2 Days” films, do you think of yourself as a romantic?

Yes, I would say so. I think I have a romantic side. But there’s also a humorous, practical side to me. Romance can be serious, so I try to take it to a less serious, more fun place.

Your film addresses the plight of women over 40 trying to find a man. What made you chronicle the benefits and drawbacks to dating at such an age, when your “life is at a crossroads,” as Violette puts it?

The truth is, I see a lot of my friends—men and women—starting their life again in their 40s. Life doesn’t end at 40. You make mistakes in your 20s and 30s, especially people driven by their work. They start settling down in their 40s, not their 20s, and it’s more complicated for women.

I like the idea Ariane says about being “Superwoman at work, and goofball in real life.” Do you find this is true, that smart women tend to be frivolous in other respects?

In French, “frivolous” means a loose woman who sleeps around! ... Women are pretty goofy. I’m goofy, my friends are goofy. I have a tendency to have fun talking about anything.

Much of the film’s comedy stems from Violette and Ariane talking candidly. Like the line, “Grandma always said, ‘Boneheads bone better!’” I like that your film is crude, but not too crude. Do you feel women writers have to pander to sex jokes for laughs?

Can you talk about how you created the situations that escalate the broadly comedic scenes in “Lolo”? What decisions did you make about revealing Lolo’s role in ruining Jean-René’s life? Would it have been wiser to make that a big reveal at the end?

In comedy, when you know the guy is going to be hit on the head, and you see the other guy hiding around the corner with a two-by-four, it’s funnier than if you don’t see the guy hiding. In horror, is it scarier to know someone’s in the house? Yes! So is it funnier to know something bad is going to happen? I think so. Otherwise, it’s too abrupt. It’s pleasurable to see the joke being set up. People smile before the joke happens. It’s a straightforward farce. It’s not that complex that it needs to be a surprise.

Your film depicts the foibles of the modern world, from repeatedly text messaging your partner to computer viruses. Do you have any observations on technology and how modern life lends itself well to comedy?

I wanted to have a text message gag, because texting is so important in our life. I’m not on Twitter, Facebook or Instagram. I don’t want to share my life except through my films. I’m secretive. It’s funny; the kid in the film [Vincent Lacoste] is one of the coolest Parisian guys, and he’s off Facebook and Instagram. He says it’s not cool enough. He listens to vinyl. I had fun with the virus, because of hacking. I wanted something very old-fashioned, Pac-Man-like. It’s completely absurd. That’s funny to me.

What can you say about working with Dany Boon, who does stand-up like Chris Rock, who co-starred in “2 Days in New York”?

I have a fascination with stand-up comics. I like to put them in my films. Dany has the same comic timing as Chris Rock when they play getting confused or hesitating. I wrote the part for Dany, but people said he was too busy and famous to work with me. The producer and I sent it to him anyway, and he agreed on the spot. It’s wonderful when people want to work with you.

I wanted to direct since I was 16. It’s not like I decided to direct because no one is giving me parts. I want to tell stories and write and direct them. If I never act again, it’s fine. I have projects I’m not acting in, but I’m happy to do them. When I’m in the film, it kick-starts financing.

Your remarks about sexism and racism in Hollywood struck a nerve.

I was completely misquoted.

How do you think your comments can help the conversation?

The conversation has been started, and it will continue.

Do you think “Lolo’s” success or failure is entirely your responsibility as writer/director/star? How do you handle the pressure of this work?

I make films, and I don’t get offended if someone doesn’t like a film I’ve done. I do get upset when people get personal and write something about me, and not the film. If they don’t like the film, that’s life. It doesn’t affect me. You can’t be scared of criticism. People are often hard on me. I wanted to make “Lolo” a French comedy that is a bubble of champagne. People can see the subtext of the darker part of the film. And some will think it’s a silly comedy. It’s fine either way. You don’t make movies for everybody. What’s funny is when “2 Days in Paris” came out, a critic said it was terrible. When “2 Days in New York” came out, the same critic said it was terrible, but said that “2 Days in Paris” was great. People can change their mind.

Before Midnight Before Sunrise Before Sunset Julie Delpy Lolo Movies