They're not eviscerating Trump: John Oliver and Stephen Colbert will never save us from fascism

The left is still convinced its late-show hosts can take down the GOP frontrunner. It needs a better plan, and fast 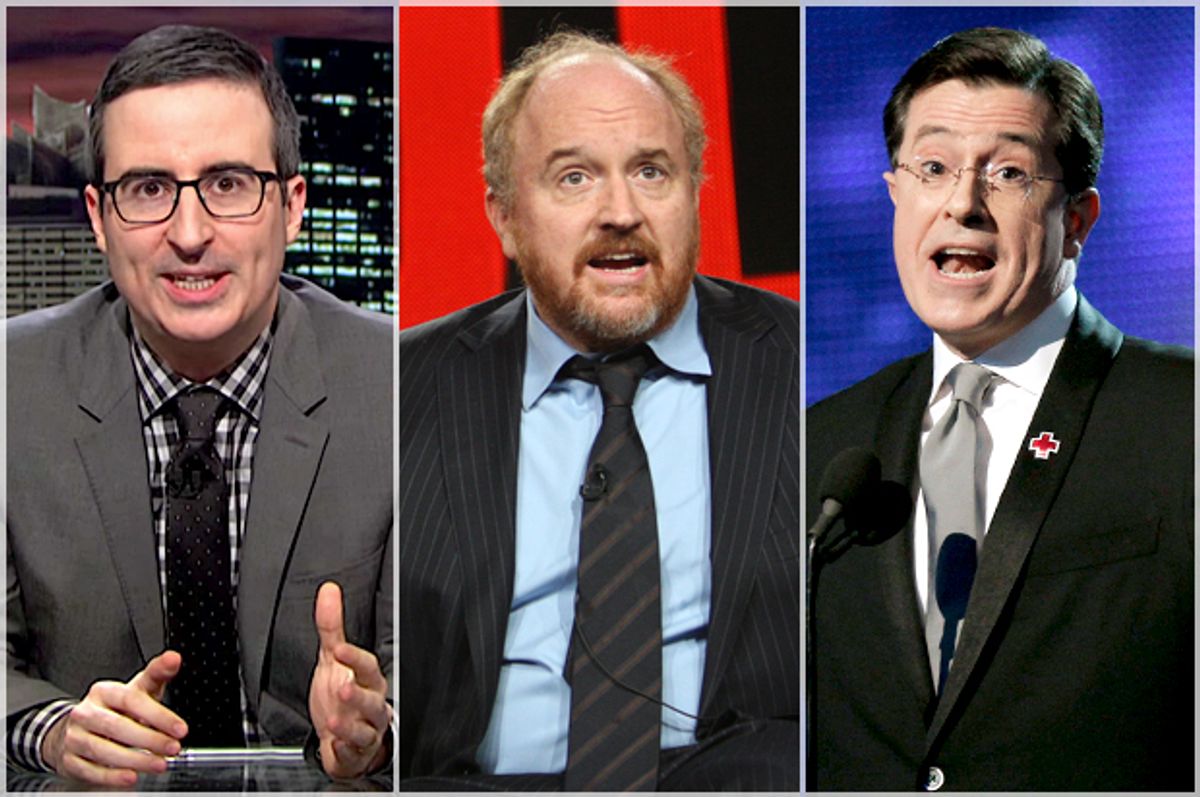 @Toure if Trump is the nominee, I actually think we should fund a SuperPAC that hires professional comedians to take him down with funny ads

Sometimes a tweet is just a tweet, and sometimes it's something a little bit more. In the case of Daily Beast columnist Jon Favreau's recent musing on the Republican primary, it's a window into the pathos of the American left on the eve of the 2016 elections. The country is confronted with a growing threat of authoritarianism, born of a neoliberal economic model it's helped implement and a racial resentment on the right that has been festering for years, and the solution to this crisis is a Citizens United-enabled super fund for Sarah Silverman to make more Hitler jokes.

This ongoing fetishization of comedians is not exclusive to the former Obama speechwriter, of course. With a few notable exceptions, the #BlackLivesMatter movement chief among them, liberals have abandoned actual politics for political theater -- without even realizing they've replaced one for the other.

So how did we get here?

Online journalism has a peculiar if predictable biorhythm. Every Sunday night, season schedules permitting, "Last Week Tonight with John Oliver" airs on HBO. And every Monday morning, the major news publications are atwitter, literally and figuratively, over his latest piece of reporting. If these sites' headlines are to be believed, Oliver routinely Crushes It, whatever "it' happens to be the focus of his attention that week -- the prison industrial complex, the pharmaceutical industry, predatory payday lenders, FIFA. Readers get a free taste of premium cable, and publishers get a viral hit if things break right on social media. They often do.

Perhaps that explains why his recent 22-minute evisceration, methodically dismantling Trump's appeal to the working class, was such a full-moon event. Buzzfeed declared that John Oliver had "destroyed" Donald Trump; Rolling Stone hailed that he had "annihilated" the Donald; Salon announced that Oliver had given Trump "exactly what he deserves"; while Vox, in a telling bit of hyperbole, proclaimed that he had delivered the takedown that "America has been waiting for." Two days later, Donald Trump would snatch seven of the 11 states up for grabs on Super Tuesday, all but cementing his place as the favorite for the Republican nomination.

One week after John Oliver #MadeDonaldDrumpfAgain, "SNL" took its swing with "Racists for Trump," a fake ad featuring seemingly wholesome-looking Americans who just so happen to be white supremacists, Klan members and neo-Nazis. The spot worked, not as any kind of political deterrent -- Trump has since captured three states and is favored to win Michigan and Florida as of this writing -- but as a piece of viral advertising for "SNL" itself, a remarkable feat considering how widely the show was criticized for inviting him to host four months prior. If you happened to log onto Facebook that Sunday morning, you were unlikely to miss it.

This week alone has seen both Stephen Colbert and Louis C.K. attempt to cut the short-fingered vulgarian down to the size of his "tiny doll hands," the former in a series of freewheeling late-night monologues and the latter in an impassioned (if fatuous) email to his fans. Like John Oliver before them, both lay bare the crass opportunism of his presidential run. And like John Oliver, neither is likely to make so much as a dent in his campaign. Which brings us back to those headlines. By what metric is Donald Trump being "destroyed"? Which America has been waiting for a self-described parrot banker to tell it just how loutish and disgusting the Republican frontrunner really is?

The answers to both questions might appear obvious. News sites routinely gin up titles in the hopes of generating web traffic, a practice glibly dismissed as "clickbaiting." (Only the dullest of readers could believe they're being sold a bill of goods with a headline like "Watch John Oliver MURDERSLAY Donald Trump"). And with the possible exceptions of Jay Leno and Jimmy Fallon, late-show hosts of recent vintage have either tacitly or enthusiastically embraced center-left politics. It follows, then, that "Last Week Tonight" (and "The Daily Show" and "SNL" and their myriad offspring) are playing to their audiences. If you were to draw a Venn diagram of John Oliver viewers and Vox Americans, you'd be left with a perfect circle.

That these routines have left Trump unscathed is a testament not only to the insularity of their audiences but the slipperiness of their subject. The Donald, with his neon complexion and taste for Mussolini cosplay, has demonstrated a stubborn resistance to the late-night treatment. "How do you spoof a candidate who treats campaigning like a roast?" asks New York Times television critic James Poniewozik. "Satire exposes candidates' contradictions and absurdities. Mr. Trump blows past those, while his supporters cheer."

They do a lot more than cheer. What makes Trump's fascist descriptor so alluring -- and his run for president so horrifying -- is that his violent rhetoric is inspiring physical acts of violence. In August, two men in Boston savagely beat a homeless, Hispanic man, later citing the Republican demagogue's immigration policies. Trump would only concede that his followers are "very passionate." Last month, three people were stabbed at a KKK rally in Southern California. The episode would see him feign amnesia about David Duke and white supremacist organizations. Meanwhile, Trump rally confrontations have emerged as their own distinct YouTube sub-genre. "The Nightly Show's" Larry Wilmore, to name one comedian, has tried and failed to find the humor in these incidents. As Salon's Sonia Saraiya writes, "[They're] just too true to really laugh at."

The 2016 election cycle can be traced around the outline of Jon Stewart and David Letterman's vacant late-night chairs. Prior to his departure from "The Daily Show," the former was equal parts news anchor and therapist for liberals of a certain persuasion -- a modern-day Walter Cronkite, with f-bombs. He was smart and he was a mensch and more often than not he was very funny. Letterman, wry and laconic, was arguably even more subversive, his political satire targeted for Democratic and Republican viewers alike, even as his liberalism shown through. His blistering McCain monologue on the heels of the Arizona senator's "Late Show" cancellation remains one of the defining moments of the 2008 election. Even now, six months removed from Stewart's exit and nine months after Letterman's retirement, we are openly pining for their returns.

And yet for all of their brilliance, neither was able to move the Overton window to the left, in as much as the "Late Show" host even cared to. None of Jon Stewart's penguin-like impressions of Dick Cheney could prevent a second term of George W. Bush, and if this Republican primary is any indication, his Rally to Restore Sanity was an abject failure.

Even Stewart understood the limits of his influence. In one of the "The Daily Show's" more memorable segments, he addressed the media's fantasies about his work. "The world is demonstrably worse than when I started," he observed, not a little forlornly. Which is why the seemingly endless barrage of late-night slayings, maulings and disembowelments are so thoroughly maddening. Taken in their totality, these news items read like an expression of collective myopia if not outright delusion, and betray a poverty of ideas in addressing the increasingly violent rise of Trumpism or worse: a complacency with the present course.

Anything could happen in the next week. Marco Rubio and Ted Cruz could form a Dr. Moreau ticket to steal the nomination from the GOP frontrunner, or Donald Trump could decide he'd rather drive a golf cart around Mar-a-Lago and bathe himself in Veuve Clicquot than be president of the United States. (He might just as easily do both of those things and still become the GOP nominee.) Until the left abandons its self-satisfaction with its own politics and embraces a movement to counter the fanaticism and demagoguery of the right, America will remain one election from outright disaster, and Cheeto-dick jokes may be all we have left.