America's fatal Trump obsession: This wannabe strongman monopolizes the airwaves while our planet is falling apart

The news about our climate continues to get more and more dire. But you wouldn't know it from watching the news 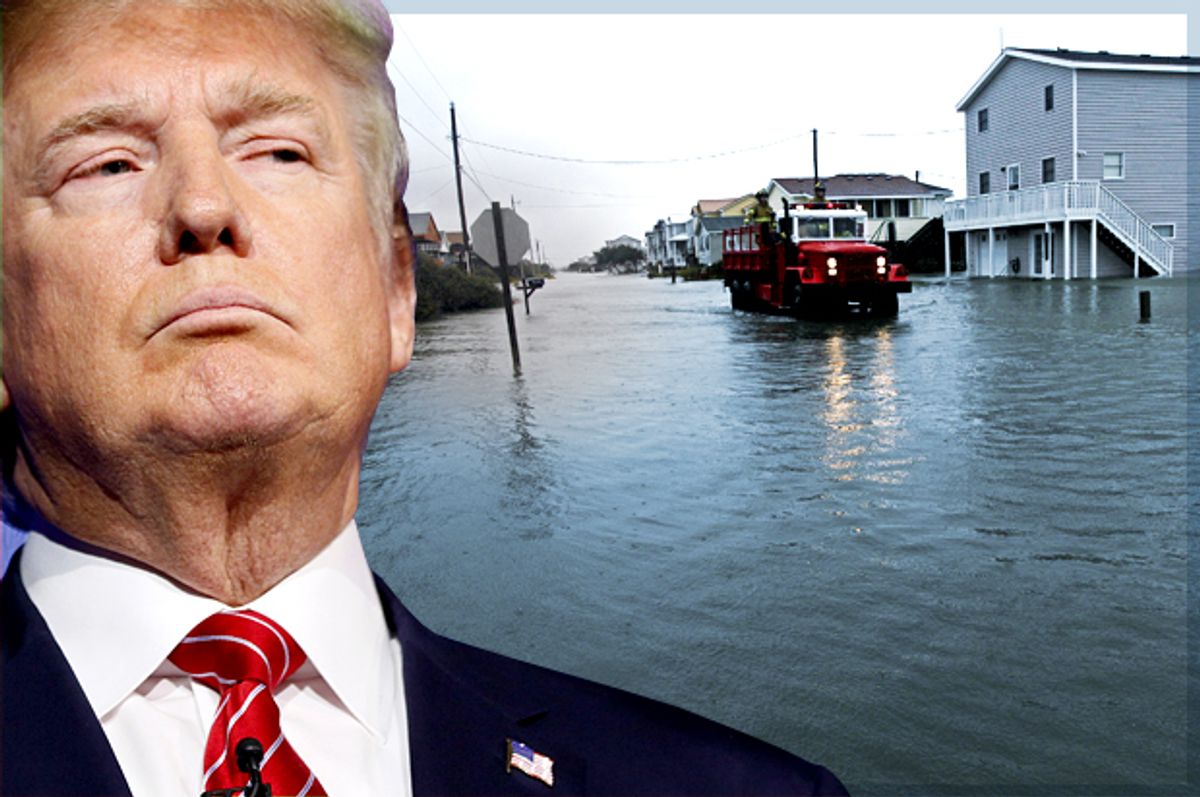 Though you’ll barely hear about it on CNN or the nightly news, during the last three months the world has been historically warm, with each month eclipsing the previous as the warmest in human history above pre-industrial norms.

In fact, at the beginning of March, global temperatures briefly climbed above 2-degrees Celsius above normal. It's the perfect example of our inability to address this crisis: For decades, the environmental movement and nearly every  global climate agreement has held the 2-degree Celsius mark as the maximum warming we can afford to risk, at least if we hope to ensure that our planet remains habitable for 7 billion-plus human lives. Crossing this climatic Rubicon for the very first time should be a huge story. But don’t turn to CNN for coverage: They’re too busy obsessing over the size of the Republican front-runner’s genitals.

As a nation and a global community, we are set upon a path of such existential risk that, in a sane and just world, the petty squabbles of our head-in-the-sand political class would be eternally foregrounded by coverage of the climate crisis. No debate, press conference or media scrum would end without some mention of the coming catastrophe, and what our hopeful leaders plan to do about it. But we don't live in a sane or just world. And in this deeply ridiculous version of reality that we do inhabit, we get wall-to-wall coverage of Donald Trump instead.

Trump has been gifted more than twice as many minutes of network news coverage since the start of the campaign than were devoted to climate change in the full six years from 2009 to 2014. The only thing more depressing than that figure is that it comes as no surprise to anyone. As his presidential nomination grows more likely, the amount of coverage devoted to the serial liar and vulgar racist grows in kind.

Meanwhile, the press’s distaste for even mentioning climate change has grown to almost comical proportions this election cycle. A Republican primary debate in February featured noted climate change denier Kimberly Stossel as one of the moderators. (Not that the candidates are any better; Trump thinks global warming is a conspiracy propagated by those clever Chinese.) And a Media Matters study recently found that the moderators of the Democratic primary debates have only asked eight questions about climate change thus far, compared to the 18 times the candidates have brought up the subject. Not prompted to talk about climate change by the moderators, Democratic presidential candidates are doing so anyway, sometimes in stark terms.

When the Intergovernmental Panel On Climate Change was first gathered in 1990, the report they released detailed the growing risk of a warming planet. It ended with an ominous warning that has yet to be heeded today, more than 25 years later:

“Because climate change would affect, either directly or indirectly, almost every sector of society, broad global understanding of the issue will facilitate the adoption and the implementation of such response options as deemed necessary and appropriate. Further efforts to achieve such global understanding are urgently needed.”

Unspool the IPCC’s typically labored phrasing and the point becomes clear: Climate change is affecting the world in all sorts of ways that go beyond warmer weather, which is why understanding and addressing climate change right now is so urgent.

The civil war in Syria was preceded by an historic and destabilizing drought; the Zika virus and other vector-borne diseases pose a growing threat to northern climates that were historically too cold for mosquitoes to propagate; Superstorm Sandy, which claimed 285 human lives, continues to affect New York and its surrounding states. The Canarsie Tunnel, which connects Manhattan to Brooklyn, was so badly damaged in the hurricane that it needs essential repairs expected to severely disrupt the commutes of 350,000 daily riders for anywhere from two to seven years.

Climate change is about a lot more than just hot summers and warm winters. Coming to grips with the scope of the problem will require a deep departure from the widespread indifference and confusion that currently pervades. But that can only happen if the media starts a full-court press on the subject. Cable news producers, assignment editors, investigative journalists, hot take writers, viral content repackagers, and even media owners themselves need to make climate change a central piece of their coverage on any topic with which it intersects.

At the Democratic debate in Flint Sunday earlier this month, Senator Sanders' responded to a question about fracking by highlighting the deafening silence on the issue:

“The media doesn’t talk enough about what the scientists are telling us, and that is: If we don’t get our act together, the planet that we’re gonna leave our children may not be healthy and habitable. [...] This is a crisis we have to deal with now.”

It's time the media start listening.