Few have done as much to pave the way for Donald Trump as Ted Cruz. Say what? 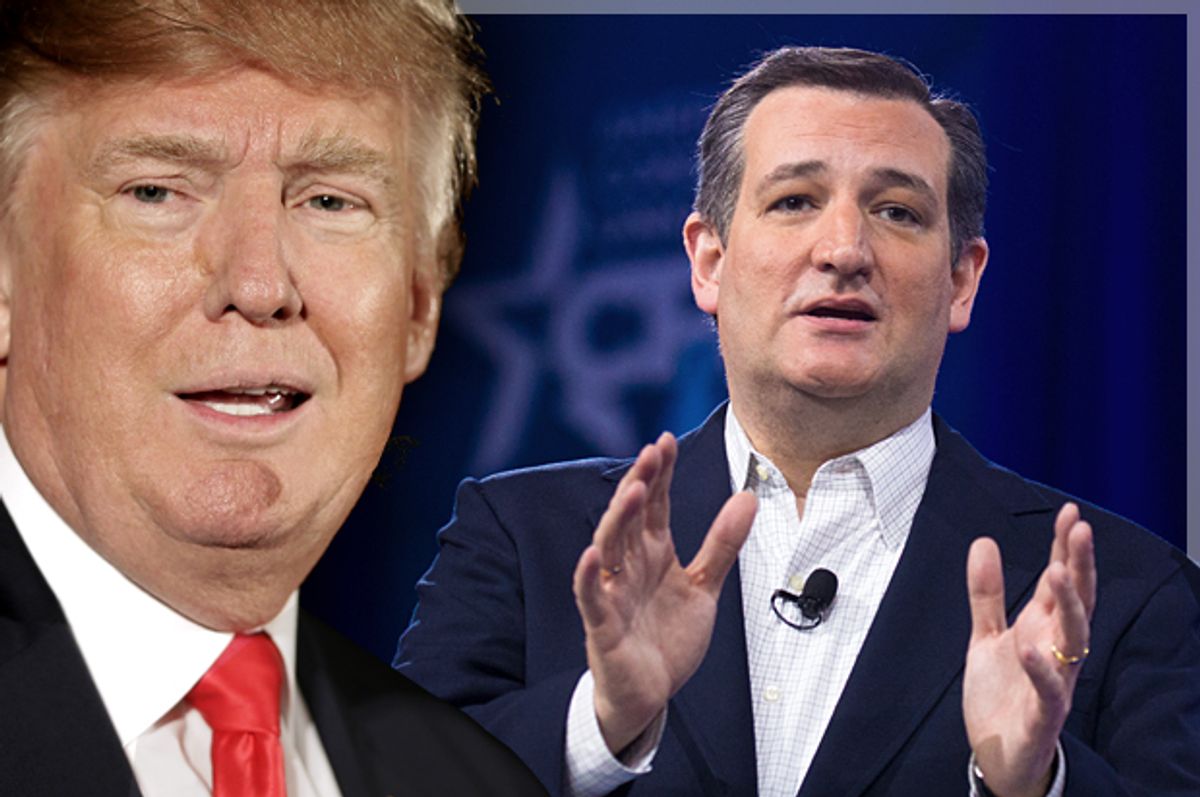 One of the greatest ironies of the 2016 presidential race is this—few did as much to create Donald Trump as Ted Cruz.

When the freshman Sen. Cruz arrived in Washington in 2013, he did so in a way that revolutionized conservative politics. Previously, conservatives argued over issues—in 1976, for example, former Gov. Ronald Reagan slammed moderate President Gerald Ford for not being conservative enough on issues like the Panama Canal. In 2013, for the first time, Sen. Cruz made an argument not about issues but about tactics. Mitch McConnell, who routinely scores ratings north of 90 percent from the American Conservative Union, was labeled a sell-out because he didn’t use the right tactics in fighting Obama.

This shift in the definition of conservatism most famously came to light in Cruz’s 2013 filibuster over Obamacare. Again, the issue wasn’t that Republican congressional leaders supported Obamacare; indeed, they had voted repeatedly against it. The issue was tactics—Sen. Cruz said more should be done to fight back including using a filibuster. Never mind that the Democrats ran the Senate at the time and that repeal of Obamacare had zero chance to succeed.

Yet though Cruz’s focus on tactics failed to repeal Obamacare, it did succeed in tapping a nerve. Around the country, conservatives began complaining about the tactics of congressional GOP leadership. And so Sen. Cruz continued to blast Mitch McConnell as much or more as he blasted Harry Reid. For two years leading up to his presidential run, Cruz laid out his case that what Washington needed was not just a conservative, but a fighter. As Cruz never failed to remind voters, it’s not enough to talk conservative; rather, candidates needed to “show” what they had done. Many times, the example he cited for himself was his failed 2013 filibuster.

This shift to a focus on tactics helped Cruz become a darling of the right.  But it also had an unintended consequence—it paved the way for Donald Trump.  After two years of hearing that what was needed in Washington was an outsider who didn’t do business as usual, is it any surprise that so many Republicans are now turning to Trump? After watching Cruz try to set D.C. on fire with matches, GOP voters are eagerly embracing Trump and his blow torch. Who better, the voters seemingly are thinking to themselves, to burn Washington down than a self-funded populist and an outsider?

Yet while it’s ironic that Cruz helped create Trump, another irony is only now developing: No one stands to gain more from the eventual failure of the Trump campaign in November than Cruz.

Assuming that Hillary Clinton beats Trump—and polls certainly suggest she could—no one benefits more in the long run than Cruz. On the day after Election Day, he can say to the GOP: “You picked the wrong candidate.”  He can claim the mantle as leader of the conservative movement four years before 2020. And in this, he has a role model he can look to: one of his heroes, Ronald Reagan.

After Gerald Ford secured the presidential nomination in 1976, the Ford team hoped that Reagan would use his considerable influence with conservatives to help push Ford over the finish line in November. Instead, though he tepidly supported Ford, Reagan largely kept his distance. In campaign appearances, the Ford people felt that Reagan talked more about the platform (which Reagan supporters had successfully turned into a conservative document) and less about Ford. Indeed, his famous speech at the 1976 convention  made only a couple of token references to President Ford. It was all about the future and mostly about Reagan.

An oversight? Not at all. As a matter of conviction, he sincerely believed that Ford simply wasn’t up to the job.  And with Carter’s narrow win in November 1976, Reagan was positioned well for 1980.

Might Cruz try a similar approach once Trump wins the nomination? It seems possible. T.S. Eliot wrote that there are no gained causes because there are no lost causes. The Cruz campaign might not necessarily end in 2016. And the explosion of the #NeverTrump movement among conservative activists gives Cruz the cover he needs to keep his distance and wait for Trump to fail in November.

Of course, serious doubts remain about Cruz’s ability to re-create Reagan’s brand of aspirational politics and the Gipper’s ability to bring new people into the party. But for now, it could be that 2016 does not prove to be the end of the Cruz presidential hopes. And for that, Ted Cruz ironically will have Donald Trump to thank.