Gawker posting Hulk Hogan's sex tape was wrong. But was it legal? 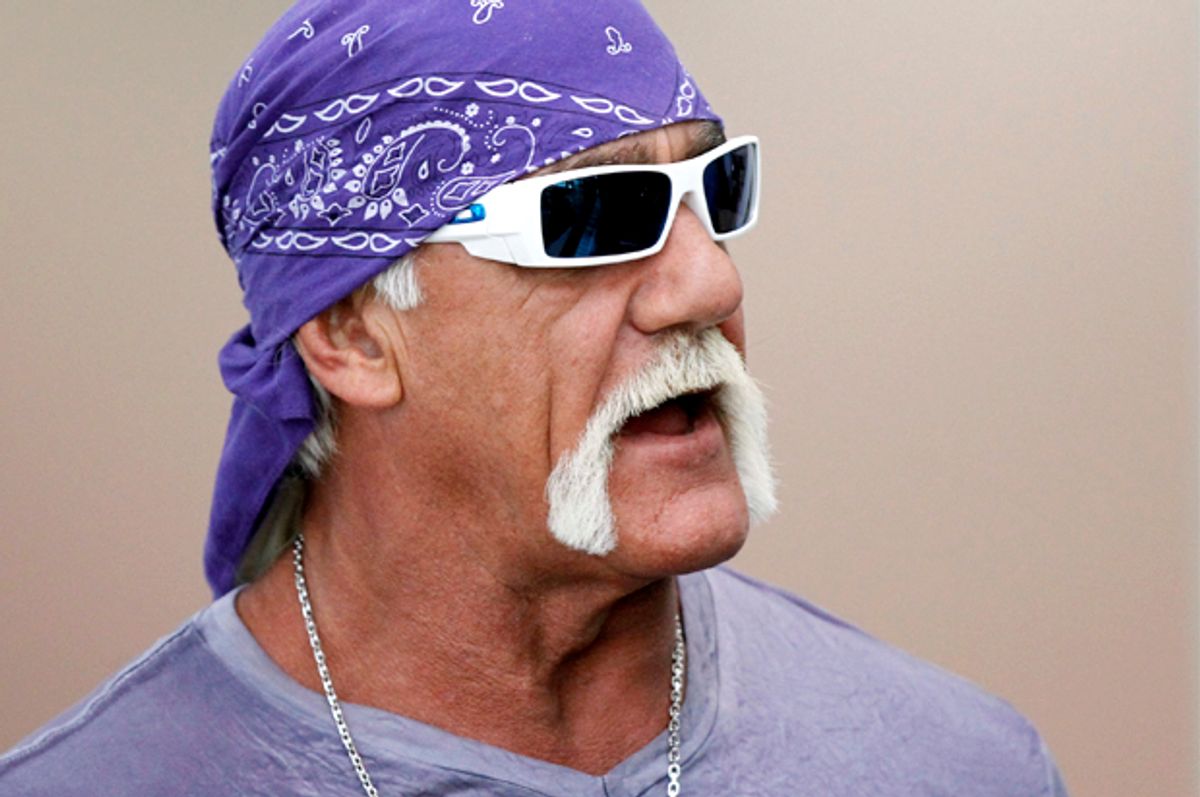 That Gawker posted a video of Hulk Hogan having sex, a video recorded and distributed without his consent, is unethical. Hogan, legal name Terry G. Bollea, says he was secretly taped, apparently by his friend, while having sex with that friend’s then-wife, at that friend’s invitation. In one light, the story can be read as humorous, because it involves Hulk Hogan and the wife of a man named "Bubba the Love Sponge." But just think: What if Gawker had posted the nude video creepily taken of ESPN sportscaster Erin Andrews? Oh wait, Deadspin, Gawker's sister site, did link to the site that posted the video. Clearly, it’s all pretty vile.

Vileness, however, won’t stop some people on the Internet, including some who pretend they are journalists. The key question, then, is whether it was in the legal clear. We’ll find out soon enough: Hogan is currently suing Gawker in a Florida court for a potentially bankrupting $100 million.

Gawker defends posting a portion of the video—above a ruminating think piece about why proles like watching celebrities fuck—because it was newsworthy. How that can possibly be was explained by the post's author, former Gawker editor A.J. Daulerio, in a videotaped deposition played in court: The only thing that could make a celebrity sex tape non-newsworthy, he snarked, would be if that celebrity was under the age of 4.

Even when the subject of such a video isn't a celebrity, Daulerio has shown little compunction about publishing. To wit: When Gawker posted a video of a young woman's bathroom stall sexual encounter several years ago, the woman emailed Daulerio begging that it be taken down, and suggested that she might have been raped. Daulerio responded by refusing to take it down, though the site changed its mind soon thereafter.

"I’m sure it’s embarrassing but keep your head up, these things pass,” he reportedly emailed.

If I prized schadenfreude, I might pray that someone riding so high on ethics-free hubris might one day face a karmic sally of Internet-breaking public humiliation, one laying him so low that any would-be trolls thinking about following in his footsteps would be deterred from doing so forever after.

Such a wish, however, would be unkind. More to the point, it's way beyond my technological prowess to effectuate. So, instead, I decided to dig into the the legal questions at hand.

Of the four experts I contacted, only one, Santa Clara University School of Law professor Eric Goldman, said that Gawker’s actions might be protected by the First Amendment because of Hogan’s previous statements -- that he had not had sex with that woman -- and the fact that he is a celebrity.

“Change virtually any fact and the legal analysis would look very different,” emails Goldman. “If Bollea hadn't made the false public statements, the newsworthiness of the video would decrease; and if Bollea wasn't a high-profile celebrity, there usually would be little or no newsworthiness to the video footage.”

Three other legal scholars told me that Gawker was in the wrong, albeit for different reasons.

Amy Gajda, a law professor at Tulane and the author of "The First Amendment Bubble: How Privacy and Paparazzi Threaten a Free Press," says that existing laws allowing people to bring suit for invasion of privacy suffice.

Gajda thinks that one day, the Supreme Court needs to draw a clear line not to further limit press freedoms but because lower courts have often been too quick to rule against reporters. For her, the Hogan case really isn't a close call.

"By my lights there is little to no value to public discourse in release the tape itself. Gawker had to know that it was voyeurism and obscenity and knowing invasion of sexual privacy."

And so I turned to one of the staunchest defenders of the First Amendment around, Eugene Volokh, a law professor at UCLA and the head of the widely read Washington Post blog, the Volokh Conspiracy. Volokh disagrees with the disclosure of private facts tort, and takes a dim view of such lawsuits because of their infringement on First Amendment rights. He has criticized restrictions on independent campaign expenditures and consumer privacy measures on similar libertarian grounds. But he says that the obscenity law should do the trick.

“The Court has long recognized a First Amendment exception for obscenity,” Volokh emails. “That has been controversial because it limited speech among and about consenting adults (indeed, I think the exception ought to be rejected in such consenting-adults situations). But where the subjects (or viewers) are nonconsenting, the exception makes sense, and it makes sense to define the scope of punishable obscenity differently depending on whether it involves unwilling participants.”

That, however, wouldn’t do Hogan’s invasion of privacy lawsuit any good. And so what Volokh seems to be saying is not that Hogan is, in the case of this particular lawsuit, entitled to damages but that, if an appropriately crafted law existed, he could be without infringing on First Amendment rights.

Gawker Media founder and CEO Nick Denton, however, has dressed up this depravity as “an opportunity to reaffirm the legal protection for free expression and the free press, in an age of ubiquitous marketing and spin.”

But I doubt that he would have published the video today. Last July, the site published allegations that a high-ranking media executive married to a woman was making arrangements to see a gay sex worker. To Gawker’s shock, the once-licentious denizens of the Internet no longer thought this was OK, and erupted forth with vituperative condemnations. The story was taken down, with Denton correctly noting that the post represented “the very, very worst version of the company.” Much less convincingly, he said, "This is not the company I built."

Two editors resigned, because, said one, it marked “an absolute surrender of Gawker’s claim to 'radical transparency.'”

The editors were right, however, to smell bullshit seeping out from underneath Denton’s new pulpit. As he put it in a staff meeting last summer, sexploiting the media exec was “threatening” the company’s “ability to actually fight its way through the Hogan trial and threatening its business.”

The looming threat of a $100 million judgment has a certain sobering effect.

I don’t want Gawker to go bust. They do a lot of great work. But I hope that a message gets sent. Courts, says Gajda, might be realizing that “perhaps they need to start drawing lines where journalism ethics drew lines before…If media can’t do the right thing then courts will have to step in.” I don’t know what the right legal remedy is, and am mindful to step lightly when it comes to free speech. But it’s something to think long and hard about. After all, the next sex tape posted to the Internet may be your own. Daulerio better fuck impressively.

* Correction: This story, linking to a New York Post report, initially stated that former Gawker editor Daulerio had responded to an email from a young woman asking that a tape of her having sex be removed from the site, "blah, blah, blah." According to Cosmopolitan, the Post was in error. The Post story has been updated without any note or correction attached.