The indisputable disaster of GOP governors: How Jindal, Brownback & Snyder have sold their constituents up the river

A recent essay claims that Republicans manage states better than Democrats. The evidence says the opposite 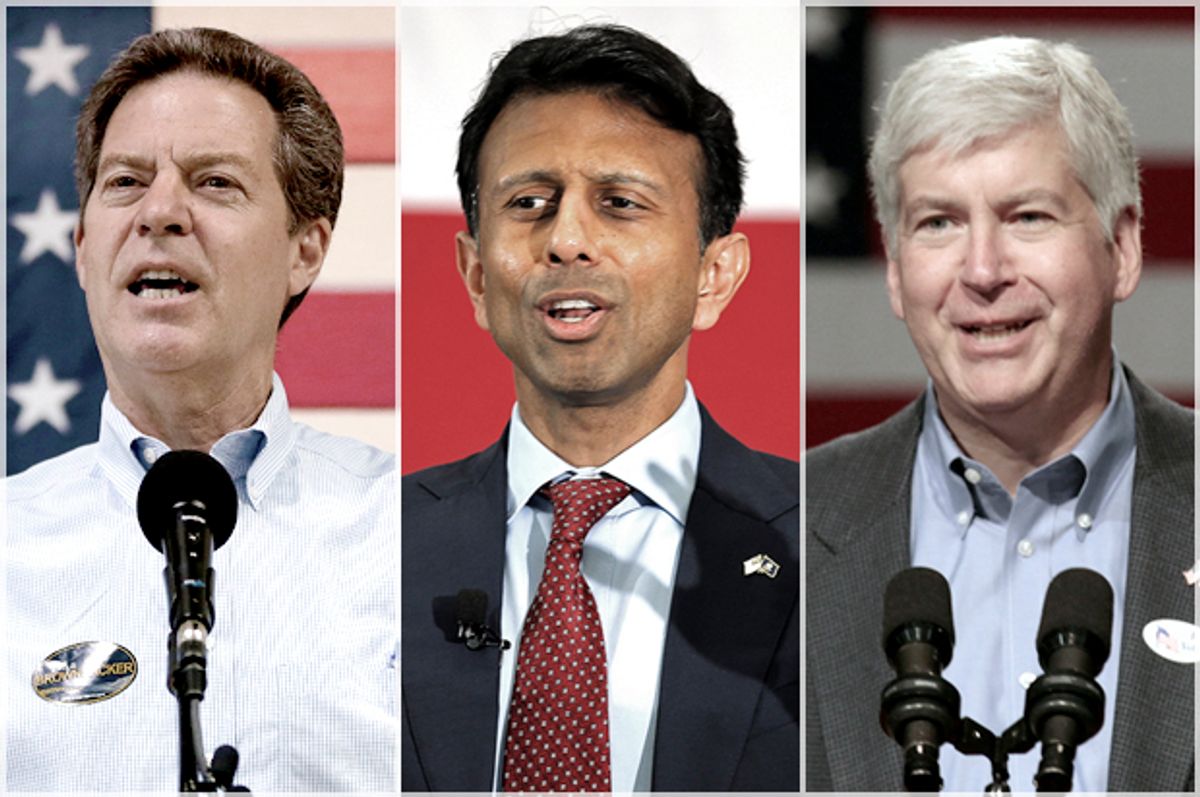 Although Democrats have held the White House for eight years, during that same time they have suffered dramatic losses at the state level. Part of this is due to low turnout in midterm elections, which favors Republicans because low-income people, young people and people of color make up a smaller portion of the electorate. In addition, the out-of-power party tends to gain during midterm elections. A more recent development that similarly favors down-ticket Republicans is the power of big donors like the Koch brothers, who have poured hundreds of millions of dollars into elections to get conservative candidates elected at the state level.

Another theory is presented by Tyler Cowen, who argues, among other things, that:

This is unlikely. Cowen, a political observer known for his academic chops, declines to cite any academic studies to corroborate this theory. Scott Lemieux points out the problem with Cowen's approach, noting that his evidence "[consists] in its entirety of a 2012 listicle showing that small states with a lot of oil tend to have low unemployment and high per capita incomes when oil is selling for $100 a barrel."

But we don’t have to rely on listicles: There has been research into whether red or blue states tend to do better. Research by David Wise finds that blue states (measured by presidential vote since 1988) outperform red states on a variety of economic and social measures (see chart below). Studying more than three decades of state level data, Christopher Witko and Nathan Kelly discovered that when economic growth is low, liberal and conservative governments perform similarly with regard to unemployment. However, when growth increases, Democrats do a better job turning that growth into lower unemployment. Other studies show that Democrats are more successful at keeping inequality in check, and invest more money into higher education.

But these academic studies can obscure the very real human pain and destruction that Republican governors, specifically, leave in their wake. The reality is that economic growth is largely outside of the control of most state and local governments. It’s certain that investment in infrastructure and education, as well as a commitment to gender and racial equity, will boost growth in the long term. But at the end of the day, most governance is really about the distribution of economic growth and power.

In contrast, the conservative and libertarian consensus is that the benefits of economic growth should accrue to a tiny sliver of the population and that health and safety regulations “infringe on freedom.” At the state level, these debates primarily come down to taxing, spending and regulating to ensure that economic growth either provides a decent standard of living for citizens or accrues to a small subset of the rich. Here, the Republican ideology of not just slashing government, but actively causing it to fail, creates horrifying results for citizens. While Democratic governors tend to act pragmatically within constraints, Republican governors act ideologically, to the detriment of their citizens, particularly the poorest citizens of their states and people of color.

Consider the Medicaid expansion, widely rejected by Republicans, even though it would strengthen their state’s budget and create a better life for millions of their citizens. One study found that the failure to expand Medicaid could lead to 7,115 to 17,104 deaths, 712,037 additional people suffering from depression and 240,700 people with catastrophic medical bills. A recent Urban Institute study finds that six states that have not implemented that expansion would see their uninsured population drop by about 40 percent. As the chart below shows, the insured rate increased more in states that expanded medicaid than those that did not. In Florida, Gov. Rick Scott’s refusal to accept the Medicaid expansion is blowing huge holes in the state’s budget (that are further exacerbated by his demands for deep tax cuts). Scott also rejected $2.4 billion in federal funds for infrastructure spending. We could turn to Mississippi, where the federal government might take over child protective service duties because “6,200 reports of abuse, neglect and the use of unsafe foster homes were not investigated.” In one case, this state government failure led to “the rape and impregnation of a 14-year-old girl.” The state’s Republican governor rejected the Medicaid expansion, leaving 130,000 low-income people (most of them black) without health insurance.

Or what of Michigan, where nearly 8,000 Flint children face potentially irreversible damage to their brains due to poisoned water, even though the Republican governor knew of the problem for years and did nothing (well, nothing for the people of Flint -- public officials switched to drinking bottled water).

Then there's Bobby Jindal, who decimated Louisiana. The state currently faces a projected $1.6 billion budget deficit after passing huge tax cuts. To pay for the cuts, Jindal cut higher education spending so much that “rats scurry through dormitories” at one historically black college. Even conservative commentator Rod Dreher writes, “If Bobby Jindal’s presidential campaign goes anywhere, it will not be because of his record governing Louisiana, but in spite of it” in a blog post titled “How Bobby Jindal Wrecked Louisiana.” The Washington Post recently reported that Jindal’s policies are at the edge of fiscal collapse:

A few universities will shut down and declare bankruptcy. Graduations will be canceled. Students will lose scholarships. Select hospitals will close. Patients will lose funding for treatment of disabilities. Some reports of child abuse will go uninvestigated.

The Post created a helpful chart (see below) to show how Jindal’s massive tax cuts blew a hole in the budget and how college students ended up picking up the tab. Luckily, the state now has a Democratic governor, whose first priority was an executive order to accept the Medicaid expansion, which will add 450,000 formerly uninsured people to the Medicaid rolls.

In Kansas, Sam Brownback’s massive tax cuts haven’t spurred the growth he projected they would, but instead wreaked havoc on the state’s budget. As the Kansas City Star reports,

“Gov. Sam Brownback’s income tax-cut plan to spur job growth in Kansas has become a full-time disaster. On Friday, the state announced it had lost 3,000 total jobs in August. That’s on top of the 5,100 jobs lost in July.”

The result is a nearly $1 billion budget gap that has led to cuts to funding for schools and highways. In glorious Republican tradition, these cuts disproportionately affected poor children and children of color. The Boston Globe reports that the state is now being sued on constitutional grounds after poor schools were forced to close early and eliminate summer school. Brownback also cut funding for healthcare programs that would benefit the poor and children, money for veterans, and programs to help children read. He recently had to slash spending for higher education and increase taxes on cigarettes (which predominantly impact the poor). Research suggests that this is the norm: Economist Howard Chernick finds that “Party control by Republicans is associated with a more regressive tax structure” at the state and local level.

Bad Republican governance isn’t confined to the South. Maine’s Paul LePage is such a stunningly unpopular governor that members of his own party have joined with Democrats to challenge his vetoes. (In many cases the Legislature overrode his vetoes unanimously.) Chris Christie has wrecked the economy of New Jersey and former Virginia Gov. Bob McDonnell was recently convicted of corruption (a difficult crime to commit in a time when money flows so freely through the political system).

Tyler Cowen positively cites Illinois, where Bruce Rauner bought himself into the governor’s mansion and immediately pushed for a right-to-work law. His then began slashing public spending, including more than $106 million in cuts to Medicaid, including millions for the elderly poor. He then slashed funding for domestic violence shelters and programs for homeless youth. Rauner’s draconian cuts to higher education may lead to the closure of the only Chicago public college that predominately serves black students.

In contrast, of course, one might cite the experience of California, which under a Democratic governor has chalked up a $2 billion surplus, passed the strongest gender pay gap bill in the country, reduced the uninsured rate by half and tackled climate change by increasing renewable fuels.

In one sense, Cowen is right: Republican states are better run if you are a wealthy white man. The Republican model -- turning the government into a patronage machine for plutocrats -- is extremely beneficial to the rich. If you are more concerned with the top marginal tax rate than orphaned children being left vulnerable to serial abuse, the mass closure of domestic violence shelters, and public education, Republicans are indeed good at state-level governance. If you think that environmental regulations should be abolished so corporations can dump their waste in communities of color, Republicans are indeed good at governance. The ideology by which conservatives govern lets the powerful exploit and oppress the weak. Or as libertarians call it, “freedom.”