The price of Hollywood whitewashing: How this complex drama about a Latina woman became just another Keanu Reeves cop movie

I watched "Daughter of God," the original film that was mangled beyond recognition into "Exposed" 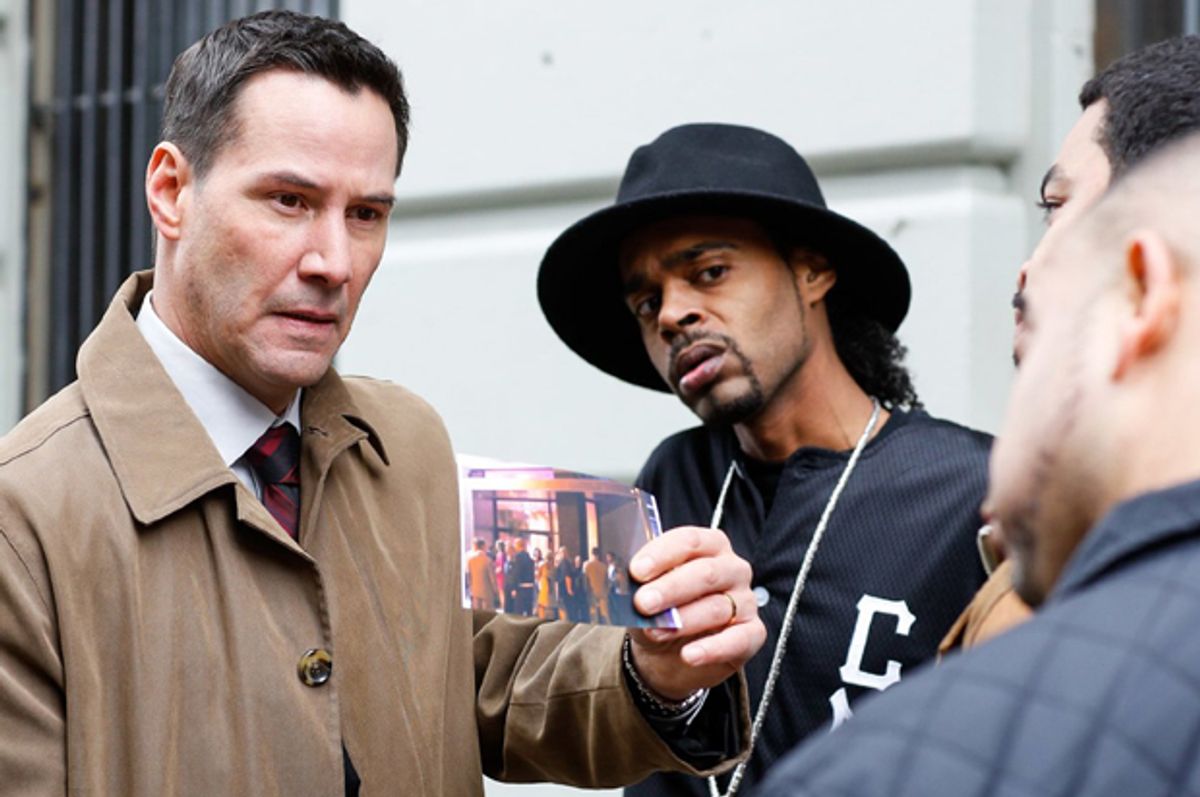 Late last year, the film “Exposed” made minor waves when its writer-director, Gee Malik Linton, took his name off the project in disgust over heavy editing that ruined his film. In Linton’s version, Keanu Reeves and Mira Sorvino held peripheral roles in a story of ordinary obscenities unfolding from the perspective of a naive Latina woman. The film released as “Exposed” made Reeves and Sorvino—a New York City cop and his murdered partner’s wife--the main characters of a standard drug-crime action thriller.

It was a new twist on whitewashing, which refers to casting white actors to play nonwhite roles. “Exposed” received withering reviews, but what it actually exposed wasn’t whodunit but the fact that producers are desperately, even neurotically attached to centering white characters in stories. Lionsgate, the studio that released “Exposed,” also backed “Gods of Egypt,” the “first big bomb” of 2016. “Gods of Egypt” was also soundly criticized for whitewashing its lead roles. Out of a production budget of $140 million, “Gods of Egypt” has so far earned back $40 million. That’s a lot of money, but it still leaves a $100 million shortfall.

Against the backdrop of #OscarsSoWhite 2.0, a fan started a petition for Lionsgate to release the director’s cut of Linton’s film under its original title, “Daughter of God.” But given the terrible reviews for “Exposed,” how much difference can rearranging a few scenes and adding back 18 minutes really make?

When Linton sent me the film, I was eager to see what could be made of it on its own terms. As “Daughter of God” began, however, several unhappy thoughts ran through my head. Ana de Armas is too pretty to play Isabel. Her character is wearing garish, dated makeup. Keanu Reeves is miscast. He looks wrong to play a gritty New York detective. Yet I kept watching, long enough to realize that the fact of their looking wrong was integral to the psychological structure of the film, as well as to the way the narrative unfolds. Isabel and Detective Galbard are both too white and not white enough, hapless misfits in communities where justice isn’t black and white, but various shades of brown.

Linton is Jamaican-American, and he tells the story from the ground up, sensitive to emotional undercurrents that betray themselves in fleeting twitches of disapproval and the whip-flicker of side glances. The people in Washington Heights might be lumped together as Hispanics, but to each other, they retain specific cultural and ethnic heritages. Isabel de La Cruz (Ana de Armas) is Peruvian. Her Dominican husband is serving in Iraq. Left vulnerable by his absence, she lives with her husband’s family, rooted to a working-class community that includes Puerto Ricans and African-Americans. Among the various women, there is love and sisterhood, but also jealousy and tensions swirling around the limpid girl who seems too good to be true.

Devoutly religious, Isabel is an unreliable narrator, if only because all women are unreliable witnesses to the events of their own bodies. To be a woman is to be dismissed and discounted as a matter of course-- a consequence of cultural perspectives that become twisted into internalized narratives. If “Daughter of God” feels like a foreign film, it’s not because the dialogue is mostly in Spanish, or because it’s set in a neighborhood that casual outsiders rarely access. It’s because the film refuses the familiar assumptions of “the male gaze” (which is not reducible to men, per se, as it is fundamentally about power, not sex or gender.) Instead, it shows events through Isabel’s naive and pious eyes, a point made right away in the first few minutes via a subway poster selling eyeshadow, i.e., “I shadow.” Viewers will not consciously make the connection, at least not at first, but the wide female eyes in the poster belong to Isabel.

Seeing is not a passive act. “You see but you do not observe,” Sherlock Holmes sniffs haughtily when Dr. Watson cannot tell him how many steps lead up to their Baker Street apartment.  Famously misogynist, the Holmesian universe fetishizes the dispassionate tool of cold logic, which brings the perpetrator to justice. By contrast, “Daughter of God” presents a nonlinear puzzle of invisible laws being broken, the kind of bodily and moral outrages that victims never report, because who believes brown and black people so marginalized that their own murders barely register as crimes? When a white policeman dies in Isabel’s neighborhood and Detective Galbard makes his sudden entry, it seems to signal the beginning of a standard police procedural, which is how “Exposed” was sold. Yet those kinds of mysteries truck in hypervisible clues that lead inexorably to socially restorative resolutions. By contrast, “Daughter of God” revolves around emotional scars that fold inside secret flesh, making the uncomfortable point that seeing is a political act, and many of us are willfully blind.

Can you trace the trauma? Did you spot the signs of guilt? They are right in front of your face—except half the audience will not see them, and will walk away from “Daughter of God” shaking their heads in confusion. In many ways, this film is a cinematic “Count the Passes” experiment. The famous test (try it here) asks viewers to count the number of times the people in white shirts pass a basketball among them. What the test actually reveals, however, is the power of selective attention. [Spoiler: Don’t continue reading until you’ve tried the test.]

White balls are red herrings. On account of paying attention to the moving balls, half the people watching the psychological experiment—better known as the “Invisible Gorilla Test”-- will not see the man in a gorilla suit sauntering into view, stopping in the middle of the action, pounding his chest, and resuming his slow journey off-screen. Yet the original test subjects wore eye trackers, which revealed that the people who failed to “see” the gorilla were actually looking right at him, and they protested that there was no gorilla until they saw the test played backwards.

“Looking isn’t seeing,” explains Daniel Simons, the professor who devised the psychological experiment. “You have to focus attention on it for people to become aware of it.” Simons added that 90 percent of test subjects were confident that they would see the gorilla, yet only half did. In other words: “The mismatch between what we see and what we think we see, is really a profound one, and has all kinds of consequence for our daily lives.”  Add the ordinary elements of race, class and gender into the mix, and it suddenly becomes obvious that “reality” really is what we make of it.

No men in gorilla suits wander through “Daughter of God.” Instead, there are angels. Or demons. Possibly space aliens. The point is that Isabel sees strange beings during waking hours. She might be hallucinating, but other people in her community seem to see them too, and don’t seem especially surprised by this. From their marginalized perspectives, there’s not much difference between vaguely Asian angels speaking English in soothing tones, and Keanu Reeves as a policeman asking nosy questions in broken Spanish. (Similarly, the film “Under the Skin,” 2015, exploited the mind’s refusal to assimilate the extraordinary by showing real footage of Scarlett Johannson driving around a small town in Scotland, picking up grateful men who never place her as the movie star even as she, as her “natural” self, was playing a space alien.) Whether supernatural or too human, these sudden apparitions are equally peculiar in appearance, inherently deceitful, and endowed with dubious powers that can do more harm than good. Either way, nobody expects them to stay. Nobody wants them to.

In one critical scene, Galbard sits alone in his police car, reading a birthday card made by his estranged little boy, and slowly Keanu’s famous face sheds the mask of the movie star, revealing Asian lineaments that render his features shockingly illegible. As his features blur with emotional pain, sagging into sorrow, Galbard’s own impossibly compromised position as friendless police officer comes sharply into narrative focus. Around the same time, viewers fully grasp that “Daughter of God” is not a police procedural but a drama with some policemen. Focusing on finding the cop killer is like keeping your attention on the white players in the “Invisible Gorilla” experiment and totally missing the elephant in the room. In “Daughter of God,” the gorilla is Isabel, a young woman too good to be true.

I expect that some will want to compare “Daughter of God” to “The Sixth Sense,” but there are French fingerprints all over this film, and it’s not just because Hervé de Luze edited the director’s cut, or that there are echoes of “Irréversible” in a few shots. Awash in vulnerability, this film reminded me of “La Moustache,” 2005, about a man who may or may not have shaved off his mustache. It was one of the most discussed films in Paris that year, but you have to see it to understand why audiences got so worked up over the trivial. Did monsieur have a mustache, or did he merely think he did? It’s a way to pose the existential question: what defines your reality—how you see yourself, or how others see you?

There is no right or wrong answer, but a lot of suffering accompanies the doubt. That film has stayed with me and so has “Daughter of God,” stuck in the back of my head for reasons I can’t quite explain. Will you see it? I don’t know. But the ball is in Lionsgate’s corner, being passed to another white shirt as they play the psychological game. The gorilla is waiting in the wings.