This is why Donald Trump's winning: The GOP thinks their base is backward -- now they're showing them who's in charge

The Republicans had disdain for their voters -- Trump is their reward. Democrats better look out or they're next 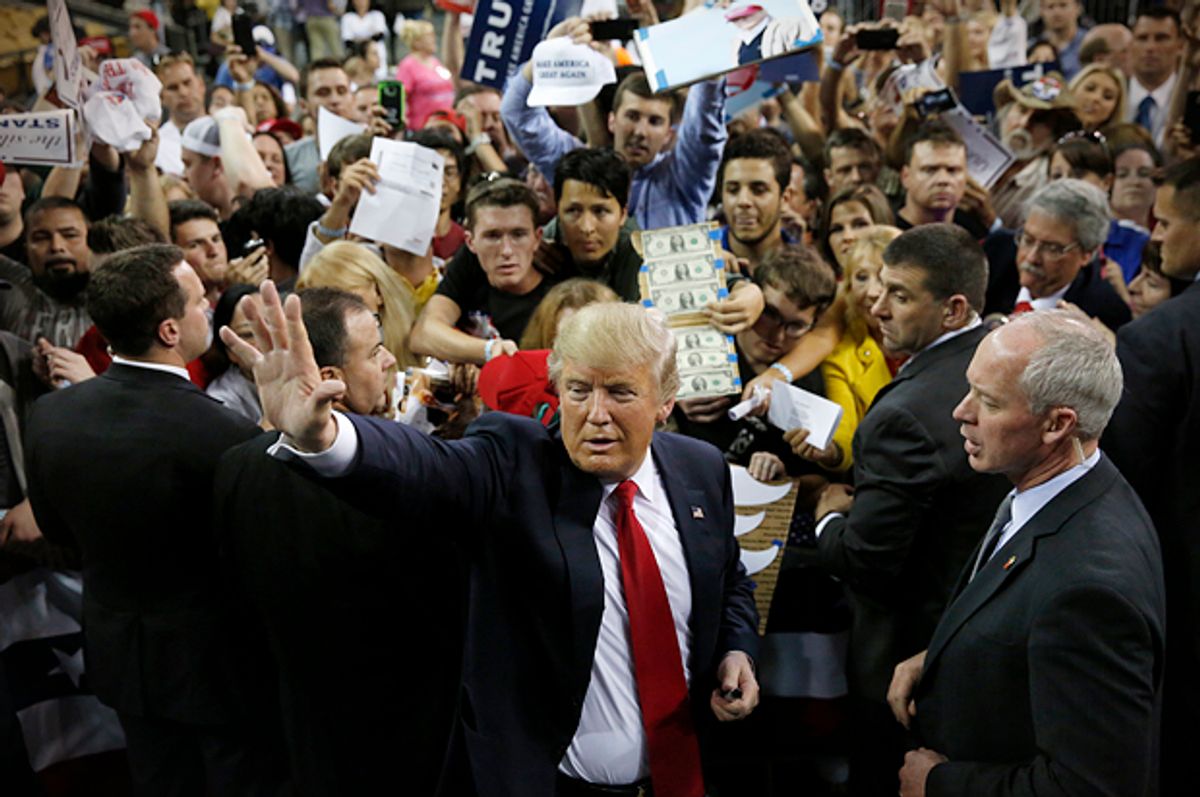 The Republican Party elite have long seen their conservative base as backward. This attitude has contributed to that base’s revival—aka The Rise of Trump. Starting with the Reagan era, this long-coming revival has shifted the entire American political debate far to the right—to the delight (until now) of the party leaders. But a split has been long growing between those who believed they could manipulate the attitudes of the base and those who actually live them, the people so often dismissed by their “betters” as “hillbillies.”

The hillbilly is the repository for all the negative attitudes in sophisticated quarters for the poorer, less educated part of white America.  At the same time, the hillbilly has become a thumb in the eye to the coastal elites—both left and right. Donald Trump, for all of his wealth and New York sophistication, has made himself into the archetypal hillbilly—or, at least, is now so seen in the eyes of many. He has become the champion of the defeated “worst” of America as well as the symbol of its rise from the ashes.

Ignoring people or dismissing them as “hillbillies” and “rednecks” when their beliefs and lifestyles do not conform to the dominant media pattern has proven to be insufficient for excluding the mass of discontented white Americans from active participation in the decision-making of the political realm. Trump has become the hillbilly vehicle for revenge upon the elites who have manipulated them for decades.

After 52 years of abuse by their rulers, this “base” has finally turned on its leaders. The irony is that the only option for the now-former dominant Republicans is going to be to fall in line with them behind Trump.

They have no place else to go: They will follow those they had so easily manipulated for so long; they will support Trump.

If they don’t, their influence will disappear.

In its rise from its own ashes after the 1964 Goldwater debacle, the American conservative movement made effective use of the resentment of the defeated, much as Democratic politicians in the South had done almost a century earlier. Unfortunately, the movement’s successes have exacerbated American divides (red state/blue state, conservative/liberal, rural/urban, black/white, immigrant/native-born) even as it renewed the strength of an older but battered vision of America.

As we are now are seeing, even the base lies on a different side than does the elite.

The media, too, are on that other side. Through fascination with the “star” (Donald Trump) at the expense of the cast (his vast army of supporters), the media have been complicit in an attempted theft of white middle-American identity by an elite with no interest in the culture they were taking away. Paradoxically, that theft and media complicity have helped increase many of the resentments that the conservative movement leaders had once harnessed so effectively. It has solidified the line.

It was always dangerous to dismiss the poorer white conservative as hillbilly, and not simply because the hillbilly, figuratively (and literally), hangs around the edges. The hillbilly is no simpleton, no bumpkin, though often dismissed as such in popular culture. The hillbilly image, as embraced by the people so designated and ignored, is also a rebuke to the elitists of both parties who have controlled American society at least since the end of World War

In many media and coastal-elite eyes, poorer and lower-middle-class white communities are seen as debased or, at best, wrongheaded—instead of as people of a threatened and shrinking culture in search of a savior. The people themselves, in the elite view, are the enemy of all “right thinking” Americans—both on the left and on the right. The hillbilly is the other side of the American coin, the tail to the head shown in contemporary media. As a result of hillbilly derision by the elite, instead of becoming the person who rises above the crowd, the hillbilly deliberately falls below.

Just as Trump, to what should be no surprise, is doing.

Today’s hillbilly is a rebuke to elite attitudes, taking sloth as a badge of pride—again, witness Trump. Though the elite have long claimed to want to “help” poor whites, the words they use for them make one suspicious: knuckledraggers, rednecks, know-nothings (harkening back to an older time), and, of course, hillbillies.

This is not new. Small-town Americans had fallen completely out of media favor by 1960. Filmmakers, for example, could no longer see a way of making the white small-town people seem worthy of protection without being accused of a naive and, eventually, racist viewpoint. For many of the elites, also, the McCarthy era of blacklists and low-level persecution, among other things (including the growing civil-rights struggle), had soured them on the “everyday” American (though most have continued to maintain their protective posture in terms of an idealized America and the rest of world).

With this increasing divisiveness, American intellectuals and artists and the rich felt more and more alienated from what had once been considered the small-town “backbone” of America. In their eyes, the veneer of acceptance and toleration had been stripped away, revealing hate and venom beneath. There were two main reactions to this by members of the elite: Turn away or try to utilize those emotions for one’s own purposes.

The mass of the white population of the United States has learned to hate both those who ignore them and those who try to manipulate them. In their eyes, Trump is the only leader they can trust, a real individualist, the ideal for many of them, the person with such confidence that he does not need the approval of anyone else. To them, he is the one person who can disdain the machinations of the elite.

The coastal elites often see the political conflict today as one between themselves as contentious individuals within a monied and educated and responsible elite. The mass of the people, stupid and owning little, are only to be manipulated—in this generally unarticulated view. The people of America (of all sorts—this isn’t exclusive to any one group), however, hear it anyway, and they see this elite (both right and left) as lying to and manipulating a gullible populace—as con artists. The elite, on the other hand, are unable to see who the real villains are and, right now, are blaming anyone but themselves. The elite do not understand the white population of America (not that they understand African-Americans or Latinos either), nor do they really want to.

It is no wonder the elite have a hard time reaching out to “average Americans.” It’s no wonder that the Republican Party, which has drifted far away from connection with its “base,” has now come under the sway of that self-styled individualist supposedly beholden to no one, the snarling image of the worst of a hillbilly, Donald Trump.

The only surprise is that the same thing has not happened to the Democrats.