There are two different Donald Trumps,” Carson said, confirming an unsettling fear about his campaign 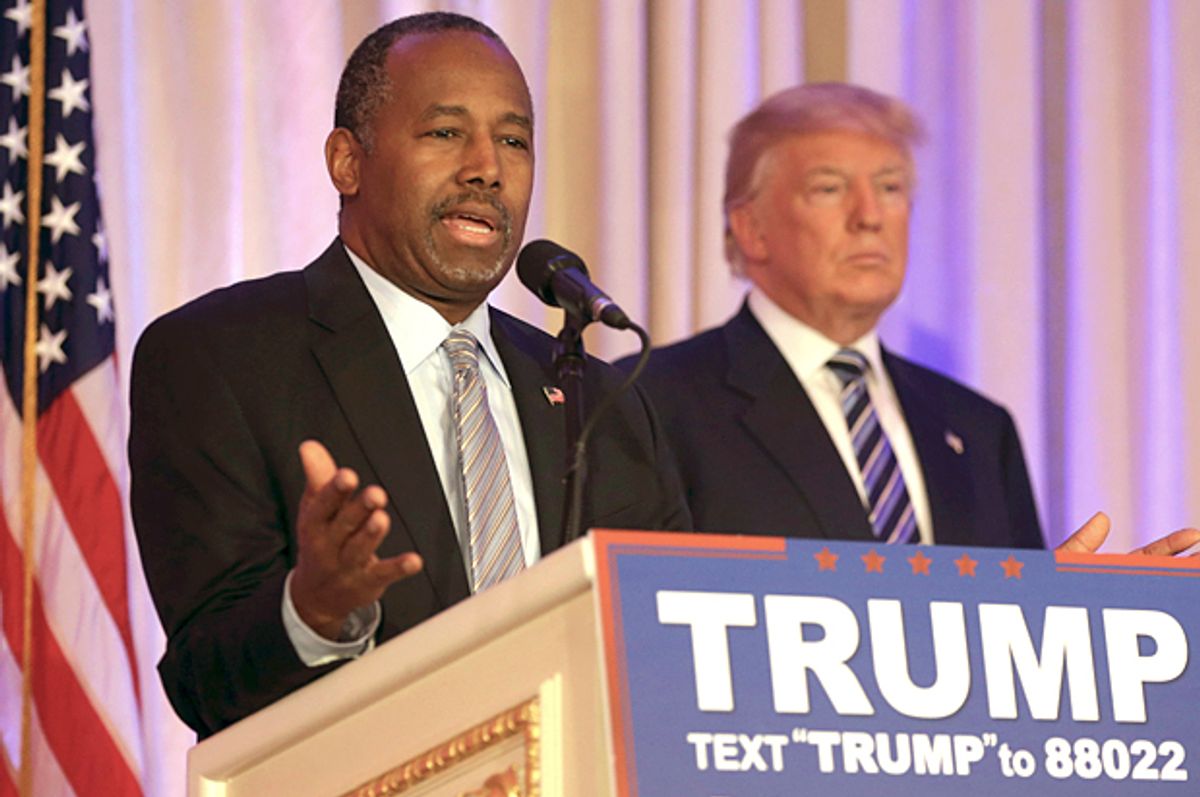 If you’re like me, you’ve suspected all along that Donald Trump’s presidential campaign was a calculated con job. I’ll grant, reluctantly, that he may actually want to be president, but it was always clear that Trump's rhetoric was disingenuous. This is what makes him uniquely odious. An earnest bigot or fear-monger is bad enough, but one who feigns and incites bigotry for purely self-interested reasons is a special kind of nuisance. And that’s exactly who and what Trump is: a shameless salesman, an insincere Howard Beale playing the part of populist folk hero, whipping up hate and violence along the way.

Trump told Republican operatives two years ago what he intended to do. “I’m going to walk away with it [the presidency] and win it outright,” Trump said to a group of officials recruiting him to run for governor of New York. “I’m going to get in and all the polls are going to go crazy. I’m going to suck all the oxygen out of the room. I know how to work the media in a way that they will never take the lights off me.”

If that wasn’t confirmation enough that Trump is bullshitting the country and the fist-pumping mobs at his rallies, then the revelations proffered by Ben Carson over the weekend ought to suffice.

Carson decided recently to endorse the Donald after a series of conversations with each of the GOP contenders. Initially, Carson was hesitant to support Trump, given the noxious tone of his campaign, which included a few ad hominem attacks on the retired neurosurgeon.

But it appears Carson’s reservations melted away after learning that Trump doesn’t really believe all those terrible things he says – about Mexicans, about Muslims, about disabled people, about women. It’s all part of the show, you see. If Trump were indeed as dumb and venomous as he lets on, well that wouldn’t be presidential material. Luckily, though, it’s just par for the course, a little red meat for the racists and jingoists in the base.

And Ben Carson gets it. It’s just “political stuff,” he told reporters.

According to The Hill, Trump secured Carson’s endorsement last week at an hour-long meeting in Palm Beach, Florida. Carson’s account of the meeting and his decision is revealing to say the least. “I needed to know that he could listen to other people, that he could change his opinions, and that some of the more outlandish things that he’s said, that he didn’t really believe those things.”

When asked which statements in particular Trump repudiated, Carson said, “I’ll let him talk about that because I don’t think it’s fair for me to relay a private conversation.”

According to Carson, then, there’s a public Trump and a private Trump, and the two have little in common. “There are two different Donald Trumps,” Carson said. “There’s the one you see on the stage, and there’s the one who is very cerebral, sits there and considers things very carefully.”

For a candidate coasting on his “authenticity,” this is a curious – though not surprising – admission. More importantly, it’s a reminder that Trump deserves all the scorn the media and history can heap on him. The country is politically aflame, and Trump is hurling rhetorical gas on the fire. He’s running a marketing experiment of sorts, with our political process and the media as its subjects.

But Trump is now a political leader; that entails certain responsibilities, whether he accepts them or not. As I wrote last week, “what he says has real consequences.” What Carson dismisses as “political stuff” is deadly serious; it’s getting people hurt and will, eventually, get someone killed.

Vox’s Ezra Klein wrote incisively of Trump’s “ideology of violence” over the weekend. Quoting: “The protesters who interrupted his rally, the political correctness that kept the police from cracking their skulls, the press that takes the hippies’ side – this is why America has stopped being great. We were strong, and we were tough, and we didn’t take this kind of shit from anybody. And now we are weak, and we are scared, and we take this kind of shit from everybody.”

This is the essence of Trump’s knuckle-dragging strongman appeal. “Knock the hell out of them [protesters],” he said at a recent rally. “I promise you I will pay for the legal fees. I promise.” Perhaps Carson is right that this is all part of the Donald’s routine. But again, that makes it all the more monstrous. It’s utter bullshit, but it’s dangerous bullshit, and Trump’s supporters, unlike Carson, do not know when Trump is serious and when he isn’t. Evidently, they take every syllable seriously, and the results speak for themselves.

Shame unto Trump for not renouncing this in the clearest possible terms, for saying “I don’t condone violence, but…” He'll be remembered for the poison he injected into the body politic this cycle, for the real damage his sham campaign has wreaked.