This is not how to show "concern" for girls 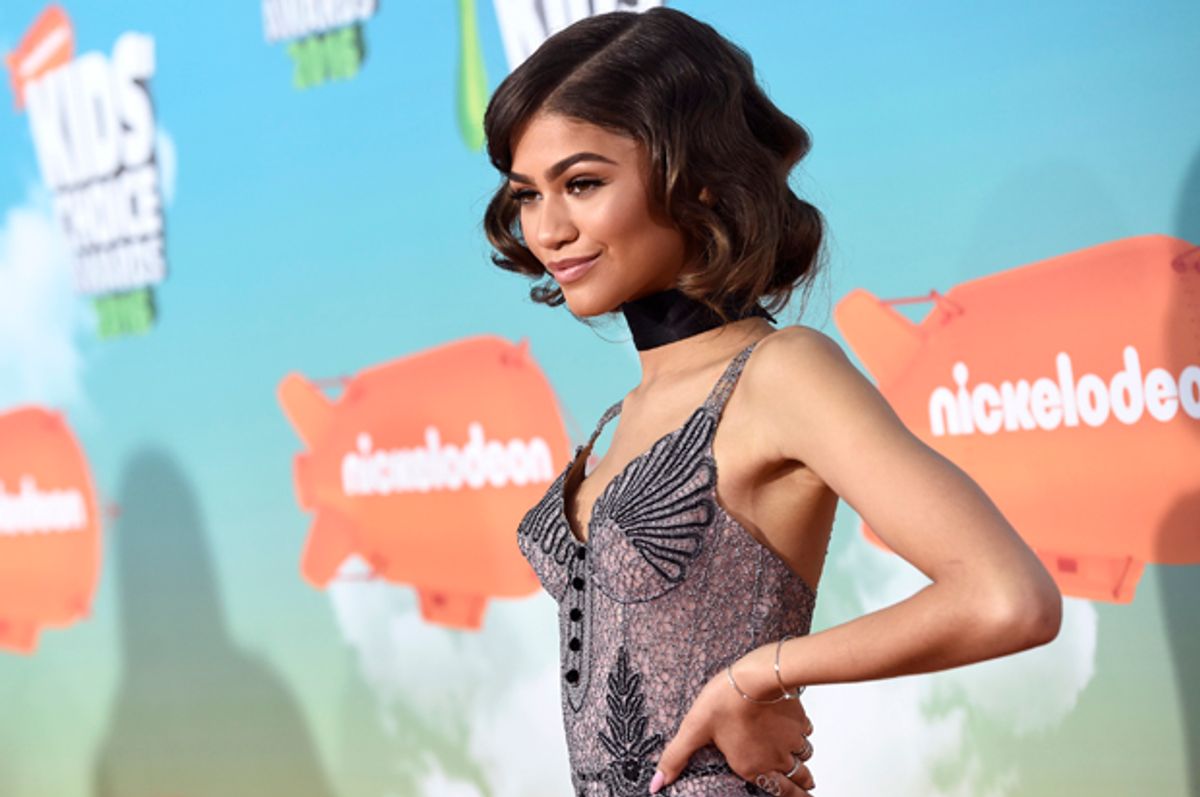 Here's an easy guide to concern trolling over teenage girls' bodies: Don't do it. It's not funny; it's not helpful and it's definitely not necessary.

It started with a tweet. On Saturday, "Difficult People" star and comic Julie Klausner retweeted a Hollywood Reporter feature and photo, featuring actress and singer Zendaya sporting a sleek bob and form fitting, vintage inspired lilac and black dress. The story noted that in receiving her recent Kids' Choice Award Favorite Female TV Star, Zendaya thanked parents for "allowing me to be a role model for your children."  "And thinspo model for your impressionable tweens," Klausner added. She then went on to reference last year's controversy, when Zendaya's Oscar night dreadlocks were criticized by “Fashion Police's" Giuliana Rancic for making her look "like she smells like patchouli oil or weed. Maybe weed." Klausner wrote, "Zendaya's ultimate retort to Giuliana Rancic is starving herself down to the size of one of her elbowz…. You don't have to have an eating disorder to attend the Kids' Choice Awards....but it helps!"

The 19-year-old show business veteran Zendaya has endured this nonsense before, and fortunately, she does not stand for negative commentary without turning it into a chance to speak out. In a 2014 series of tweets, she admitted, "I'm naturally a skinny string bean and I love it," adding, "People be like 'I can see her bones' ......um yeah good observation booboo, that's called a clavicle… People be like 'I can't even see her bones'.. good observation booboo, that's called a curve… Sorry I have zero tolerance for ignorance." Then, when her red carpet hairstyle ruffled Rancic's feathers in 2015, she posted a message on Instagram noting that "To say that an 18 year-old young woman with locs must smell of patchouli oil or 'weed' is not only a large stereotype but outrageously offensive," and explaining that her hair was a statement "to remind people of color that our hair is good enough. To me locs are symbol of strength and beauty.” Rancic soon apologized, calling the incident "a learning experience."

So when Zendaya saw Klausner's tweet -- which, let's note, also thin shames Rancic -- she quickly lobbed back, "Do you find this funny? I will write another paragraph to educate you as well #youreallywannabenext?" But instead, she just posted a quick message that "Now....everyone go look in the mirror at their beautiful body, and love that shit #thickgirlswinning #skinnygirlswinning #weallwinning." As she said when she won her award, Zendaya "really, really does not" take being a role model for granted.

I'd have thought this would go without saying but, OK, here it is. Zendaya is not responsible for the eating disorders of any generation or individual. And implying that a person you don't know is "starving" herself or has an "eating disorder" is irresponsible and frankly a jerk move. It is of as much jerkitude as saying that plus-size women, because they are plus-size, are automatically "not healthy." Don't do it. It's rude. And ignorant.

Klausner then hilariously announced she was going "to use this opportunity to educate Zendaya fans that the Reagans ignored AIDS" and mentioned, "Love that Zendaya goes so far as 2 have Nancy Reagan's body type!" Comedy! But then Roxane Gay, who is smart about these things and whose next book "Hunger" takes on the issues of food and body image, said, "There are far more lucrative targets than young women on this front…. and you can't ignore the racial factor. And if that isn't a consideration, well. Yikes." But Klausner replied that "I think it's exhausting & a shame to see one emaciated girl after another held as a beauty ideal." She did, however, admit she had not viewed her observation as potentially racially charged, saying instead, "I saw a star who looked sick & got sad that millions try to starve themselves to emulate…. I just see her as a star - young thin and beautiful and famous." But Gay, ever ready to educate, pressed on, adding, "As a black woman there is a painful history of white women mocking our bodies."

Klausner eventually conceded that "For those who have spoken to me respectfully about post-racialist bias…. ...I won't apologize, non-apologize, delete tweets, backpedal or refuse to own my s__t. BUT- I will be more thoughtful going forward. /end," and she argued that "seriously not joking at all when I tell you - I have made a living picking apart at skinny white celebs." So, I'm sorry, I'm confused, was she jokingly "picking apart" a celebrity or legitimately "sad" about an "emaciated girl"? And if she really cares, as she claims, about "a generation of girls," can she honestly believe that picking on women she deems "skinny" celebrities is going to help them?