As the "humanitarian catastrophe" in Yemen worsens and millions starve, Saudi forces continue to kill civilians 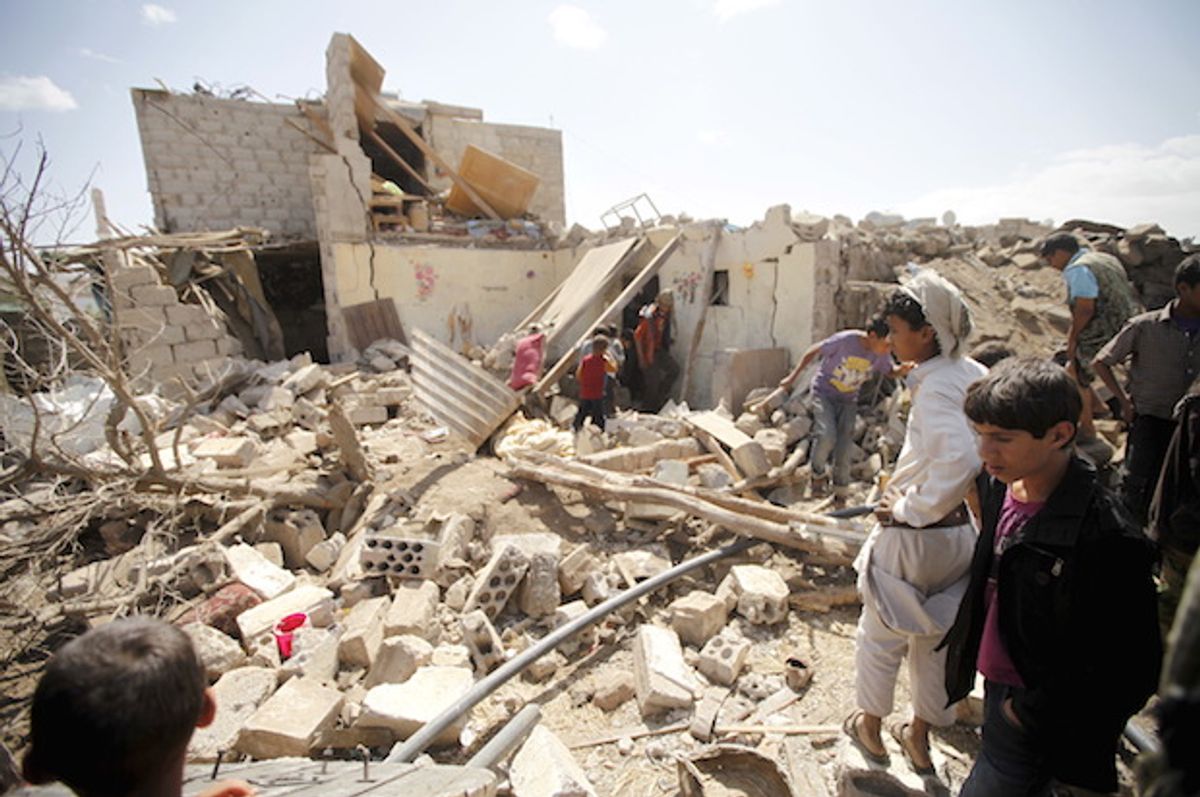 Yemenis outside a house that was destroyed by a Saudi-led coalition airstrike in Yemen's capital Sanaa on February 25, 2016 (Reuters/Mohamed al-Sayaghi)
--

The United Nations has for months stated that the U.S.-backed Saudi-led coalition, which has been waging a destructive war in Yemen since late March 2015, is responsible for two-thirds of civilian casualties there.

Rupert Colville, spokesman for the U.N. High Commissioner for Human Rights, once again confirmed this fact in a March 4 press briefing.

"Civilian casualties continue to mount in Yemen," Colville stated. "During February, a total of at least 168 civilians were killed and 193 injured, around two-thirds of them by coalition airstrikes."

The U.N. also indicated in its March briefing that the violence exacted upon the Yemeni people is increasing. The number of people killed nearly doubled between January and February, the latter seeing the worst violence since September.

"There have also been worrying allegations," Colville added, "that coalition forces dropped cluster bombs on a mountainous area to the south of the Amran cement factory, where a military unit loyal to the Houthis appears to have been the target."

Cluster bombs are banned around much of the world. The Convention on Cluster Munitions, the 2008 international treaty that bans the weapon, has been signed by 118 countries, but the U.S. and Saudi Arabia have refused to endorse it.

In January, the Saudi-led coalition dropped U.S.-made cluster bombs on civilian neighborhoods in Yemen's capital Sanaa. Human Rights Watch blasted the attack, saying the "inherently indiscriminate nature of cluster munitions makes such attacks serious violations of the laws of war. The deliberate or reckless use of cluster munitions in populated areas amounts to a war crime."

"The coalition's repeated use of cluster bombs in the middle of a crowded city suggests an intent to harm civilians, which is a war crime," Human Rights Watch Arms Director Stephen Goose added. "These outrageous attacks show that the coalition seems less concerned than ever about sparing civilians from war’s horrors."

On the other side of the war, the U.N. says indiscriminate shelling by local armed rebel groups affiliated with the Houthis or army units loyal to former Yemeni President Ali Abdullah Saleh was responsible for 49 civilian casualties, or 29 percent of civilians killed in February.

Since the Saudi coalition began its bombing campaign, the U.N. estimates 3,081 civilians have been killed, with an additional 5,733 civilians injured.

The U.N. says the worst single attack in February was the coalition bombing of a market in a northeastern district of Yemen's capital Sanaa, in which at least 39 civilians, including nine children, were killed and another 33 injured.

The U.N. High Commissioner for Human Rights spokesman noted that this Feb. 27 bombing was the bloodiest airstrike since another 41 Yemenis were massacred in the US-backed coalition bombing of market in the northern city of Saada five months earlier.

In March 2015, the coalition bombed a refugee camp in the north, killing 40 Yemenis and wounding 200 more. Human Rights Watch, which has since accused coalition forces of having committed numerous war crimes, remarked at the time that the attack "raised grave concerns about violations of the laws of war" and was "probably unlawfully indiscriminate or disproportionate."

Colville also warned that an armed militant group believed to be al-Qaida offshoot Ansar al-Sharia blew up a revered historical monument in Yemen in mid-February.

Extremists groups like al-Qaida and ISIS have been exploiting the chaos since the U.S.-backed Saudi coalition began bombing Yemen in late March 2015. As early as April, figures like Secretary of Defense Ash Carter were warning that al-Qaida in the Arabian Peninsula had "seized the opportunity of the disorder there and the collapse of the central government."

Since April, rights groups have said the war in Yemen has created a "humanitarian catastrophe."

The U.S.-backed bombing and Saudi blockade of Yemen, the poorest country in the Middle East, has led to mass starvation. Approximately 14.4 million Yemenis — more than half of the population of the country — were food insecure, the Food and Agriculture Organization said in January, and hunger is growing.

"The numbers are staggering," a Food and Agriculture Organization official explained, calling the dire conditions in Yemen, in which millions are on the verge of famine, "a forgotten crisis, with millions of people in urgent need across the country."

A spokesperson for the U.N. High Commissioner for Refugees furthermore revealed in early March that more than 2.4 million Yemenis have been displaced in the war.

The number of people displaced "remains staggeringly high and a cause for grave alarm," the U.N. spokesperson said, adding that the "situation is likely to get worse, amid increasingly dire humanitarian and socio-economic conditions and with no political settlement in sight."