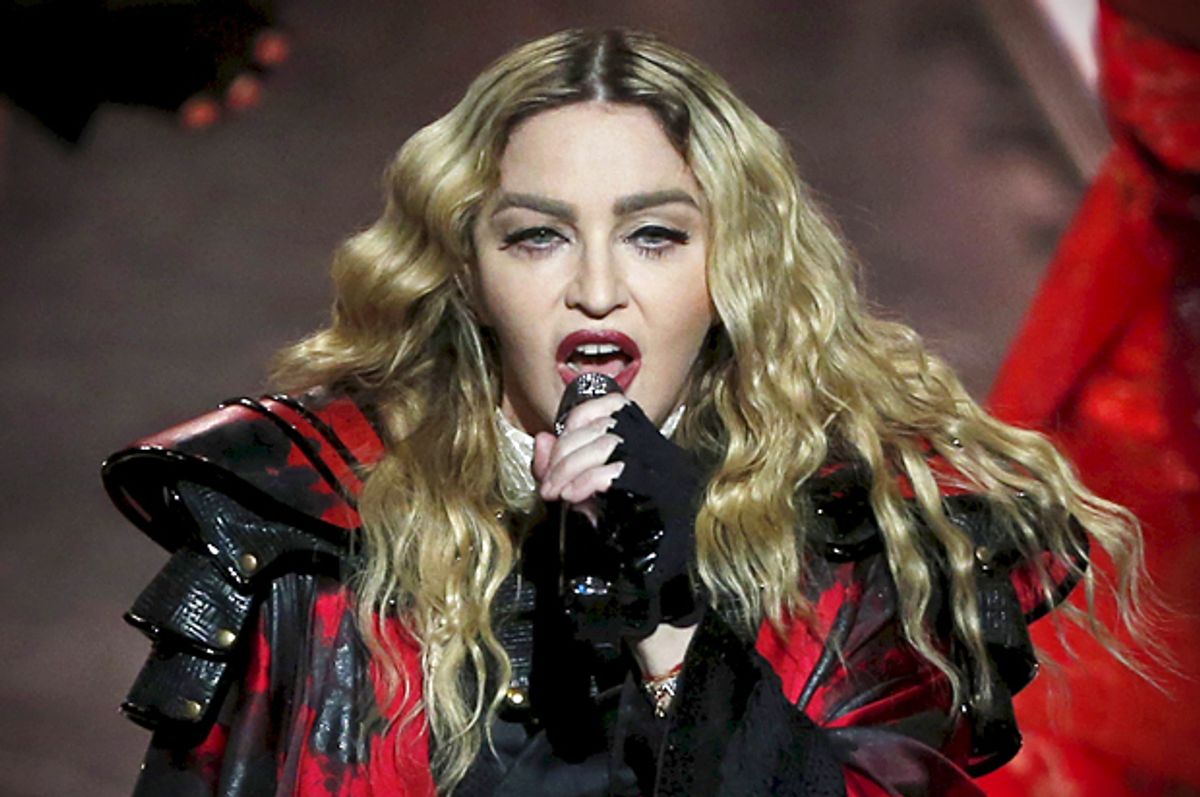 Throughout her more than thirty year career, Madonna has been a skilled media manipulator and a master of well-choreographed controversy. So were her recent performances in Australia a contrived bit of showmanship, or a legitimate meltdown? Or were they, maybe, a bit of both?

The 57 year-old entertainer, currently touring down under for the first time in 23 years, drew wildly mixed responses over the the past few days for her Melbourne shows. A Monday review in the Guardian said her current work has encapsulated "the enduring appeal of Madonna herself: only by doing exactly as she pleases can she define herself on her own terms," and summarized, "One hardly walks away unentertained. If the definition of an artist is their unique contribution to spectacle, the queen reigns supreme." Yet other news outlets have quick to spot apparent cracks in the queen's armor.

Late last week, she performed an intimate "Tears of a Clown" show that several sources reported that the show started four hours late, with the singer finally taking the stage close to one in the morning. In fan clips from the show, she can be seen gamely pedaling a small tricycle, falling over, and then getting up and chatting jokingly with the audience. A comic tumble, or poor navigation? Madonna told the audience the show was a "work in progress," but what does that mean?

She later told the crowd, "There's no end to the mistakes I've made. Everybody knows the saga of me and my son Rocco. It's not a fun story to tell or think about." She then dedicated the song "Intervention" to her Rocco, while photos of the teenager appeared projected behind her. It was a very public reference to the current — and ugly — custody battle she and her ex husband Guy Ritchie have been embroiled in. It was not her first time acknowledging her discord. During a Nashville show in January, Madonna reportedly told the audience, "I'm looking for a husband, not a c_nt. I already married a c_nt." More recently, during an Australia show, she reportedly referred to her ex as "a son of a b___h."

Then, for her bigger weekend Melbourne show, the Daily News reported the event included "a bizarre, boozy tirade" with the singer "knocking back swigs of tequila as she beckoned to the crowd to take care of her." Dlisted, meanwhile, called the performance "hazy, booze soaked gibberish." At one point in the show, she told the audience, "F__k me, please someone f__ck me," before adding, "I'm just kidding. I don’t have to ask for that."

She could also seen taking swings from a bottle and a flask, though her reps say she told the audience that the contents of the bottle weren't "even real" and that the liquid in the flask "Tastes just like water." Earlier this winter, Louisville fans speculated whether she'd been drinking during her performance there, an accusation Courier-Journal writer Jeffrey Lee Puckett disputed, saying, "She never did anything that remotely seemed like the actions of a drunk person. Was she lying and/or crawling on the stage at certain points? Yes. Has she ever, in more than three decades of performing, not done those things? No."

Madonna's public image has always been that of the steely perfectionist. When, last year, she took a tumble during a performance at the Brit Awards, it garnered instant headlines, evidence that perhaps she was a human being after all. And over the past year, as her personal family drama has played out, she has seemed to have fewer damns to give about hanging on to her efficient pop robot persona. Are her tardiness and her falls and her swigs of possibly alcoholic beverages and her inarguably digressive rants a sign she's falling apart, or evidence she's turning her private pain into a new form of performance art? The funny thing about Madonna, a notoriously terrible actress, is that it's hard to tell. But when she told the Melbourne audience this week that for her "Tears of a Clown" escapade, "I just let it all hang out. I was vulnerable," I believe she was, for a change, showing her own  messy, imperfect truth.