“The Bachelor” is still for white people: A sour fairy tale, fed to millions, that keeps prizing whiteness above all 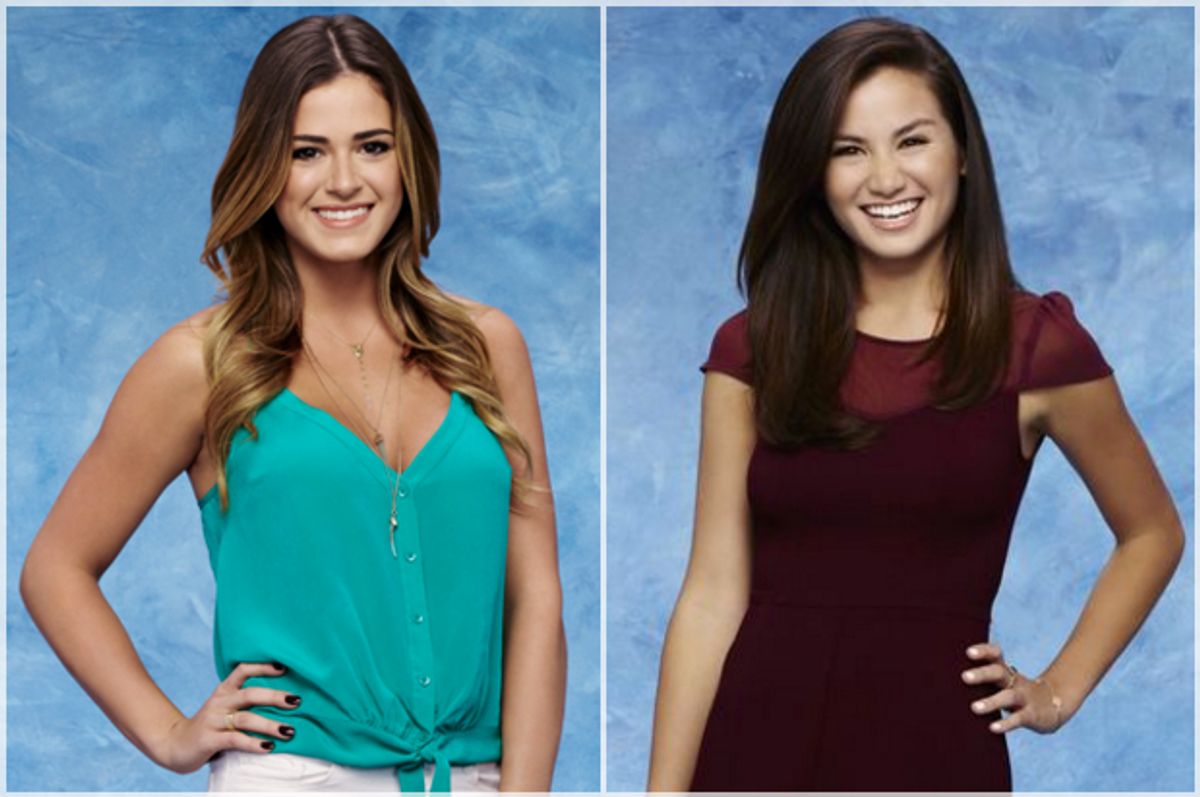 JoJo Fletcher and Caila Quinn of "The Bachelor" (ABC)
--

Buried in the manufactured drama around last night’s finale of “The Bachelor”—in which Bachelor Ben Higgins ended up proposing to Lauren Bushnell, after an agonizing period in Jamaica where he claimed to be in love with two different women—was a far more significant and broad-reaching story: that of which Americans are allowed to become America’s sweethearts. It’s both a superficial question and a profound one. After all, we are talking about ABC’s extremely hetero- and gendernormative reality television franchise—which includes “The Bachelor,” “The Bachelorette” and “Bachelor in Paradise”—which codifies and reinforces a pretty terrible view of sex, dating and relationships. But we are also talking about a massively popular program, one that functions as a wish-fulfillment fantasy for millions of viewers every year. If “The Bachelor” is our modern-day fairy tale, then who becomes its princes and princesses does matter.

Last night, the new bachelorette was announced to be “Southern sweetheart” JoJo Fletcher, who was dumped in the last half-hour of the finale after tremulously confiding to the camera that her fairy-tale love story was about to become real. This wouldn’t be news if it weren’t for the fact that the franchise had already been prepping its first woman of color bachelorette, Caila Quinn, only to change the lineup in the 11th hour. (Quinn is half-white, half-Asian; her mother is Filipina.) Just this January, ABC chief Paul Lee—who helmed one of the most diverse programming slates in history in his years at the network—said, “I’d be very surprised if [the bachelorette] in the summer isn’t diverse. Maybe I shouldn’t have said that, but I think that’s likely to happen.”

But last month, Paul Lee was ousted at ABC, in a behind-the-scenes network power play that will likely have many lasting ramifications. Promises made from him a few months ago don’t have the same stickiness. And in the last few episodes of this season’s “The Bachelor,” Higgins violated one of the show’s unwritten rules by first declaring an “I love you” before the final rose and second by telling two women he loved them, setting up one for public heartbreak. The unlucky other woman might have gotten her heart broken on national TV, but Ben’s breakup with her ensures her the pay for another season of television, at least: JoJo garnered so much sympathy from the ordeal that it likely influenced the producers’ decision to make her the next bachelorette. Caila gets a raw deal, but there isn’t a contestant on “The Bachelor” that doesn’t. And though Caila would have been the first bachelorette of color, JoJo is in fact half-white and half-Persian, a fact found in her bio on the show’s website but elided from the official press release announcing her.

And this leads to a whole new set of complicated questions about representation on “The Bachelorette” and its related shows. Because it is unlikely “The Bachelorette” is going to have a frank discussion about whether or not people with Persian descent experience either white privilege or ethnic stigma; it is unlikely that JoJo’s ethnicity will be given any screentime at all. Because while racial diversity does, at times, have a place on “The Bachelor” et al., the types and kinds of racial diversity are often white-passing or stereotypical. To quote Reality Blurred’s Andy Dehnart: “Diversity is more than just casting a person. It’s about how that person is portrayed to the audience—what the editing includes and highlights, and what stereotypes it reinforces.”

Let’s look at some of those tools, and how “The Bachelor” uses them. Viewers of the show will know that contestants like JoJo and Caila would only be called by their first names for the majority of the show—which, like kindergarten, drops the confusing and often ethnicity-indicating last name. This is probably the most relevant for a contestant like Mary Delgado (who “won” her season in 2004) whose given name is Maribel. The nickname and the lost last name ethnically sanitize her; if she looks physically darker-skinned than the other contestants, it could be plausibly chalked up to an overuse of self-tanning lotion.

Conversely, the only “ethnic” bachelor, Juan Pablo Galavis, is “diverse” according to Paul Lee’s stated standards because he grew up in Venezuela. But Galavis is also a white man, and labeling someone from Latin America as simply “Latino” or “Hispanic” is a quick way for Americans to compress what is an extraordinarily complex question of racial identity. He is Latino, but he does not solve the problem of an entirely white slate of bachelors.

And without Galavis, every single bachelor and bachelorette is a white person, and nearly every winner is, too. Casting includes a token number of minority contestants each season, but those contestants tend to be eliminated quickly. Of the combined 31 seasons of “The Bachelor” and “The Bachelorette,” only four winners can claim any nonwhite ancestry. And on “The Bachelor,” every woman who has snuck into the winners’ circle has done so through the dint of Anglicized names and light-enough skin.

There is a particular ethnicity that “The Bachelor” favors: Like near-bachelorette Caila Quinn, past winners Tessa Horst and Catherine Giuidici are biracial Asian-white. With Quinn looking ascendant to the title of bachelorette just a few days ago, NPR’s Akemi Johnson, in this extraordinary piece for “All Things Considered,” offers up a hypothesis for why this particular ethnic identity of biracial Asian-white might be so enticing to “The Bachelor’s" producers:

Mixed-race Asian-white women become the perfect vehicles for diversity on this show because they are "white enough to present to the family," as [NYU Professor of Sociology Ann] Morning said, while still being exotic enough to fill a quota. Morning suggested they also get a boost from the model minority myth and the recent idea that being multiracial is "cool."

Johnson also quotes another academic, Rachel Dubrofsky, who observes that every nonwhite contestant who made it to the final weeks or ended up winning in her season explicitly downplays her racial background and ethnicity. Horst’s Chinese-American mother is even backgrounded during the hometown visit in her season, in 2007. And though this is pretty terrible, it might be preferable to what happened this season, when, as Johnson observes, bachelor Ben and Caila Quinn’s white father traded some uncomfortable Asian-wife stereotypes—one that Caila herself grimaced at—as a way, possibly, to make Caila Quinn seem like a more desirable contestant (and future bride).

This is a long way of saying that while, on one hand, there is something frustrating and suspicious about “The Bachelor’s" sudden decision to make JoJo the bachelorette, after Caila seemed to have it locked down, the grander injustice here is something more diffuse and pernicious. “The Bachelor” is devoted to whiteness, for its own probably ratings-shy reasons. (Conventional wisdom suggests that white American audiences will struggle to identify with obviously nonwhite leads, and therefore, ratings will suffer. Actual wisdom, which notes the massive success of shows like “Empire,” suggests that has limited basis in reality.) The show might be expanding its umbrella to include a half-white, half-Persian or half-white, half-Filipina bachelorette in the near future, but the strictures for being the bachelorette are still the same—to be as white-passing as possible until the appropriate moment for stereotypes emerges. The show’s forays into other ethnic identities cleaves so closely to the accepted racial norm that it reads less like opening up “The Bachelor” to other races and more like expanding, ever so slightly, the bounds of acceptable telegenic whiteness. It’s not much of a fairy tale.