Harrison Ford doesn't belong in a museum: Indiana Jones in his 70s is exactly the hero we need 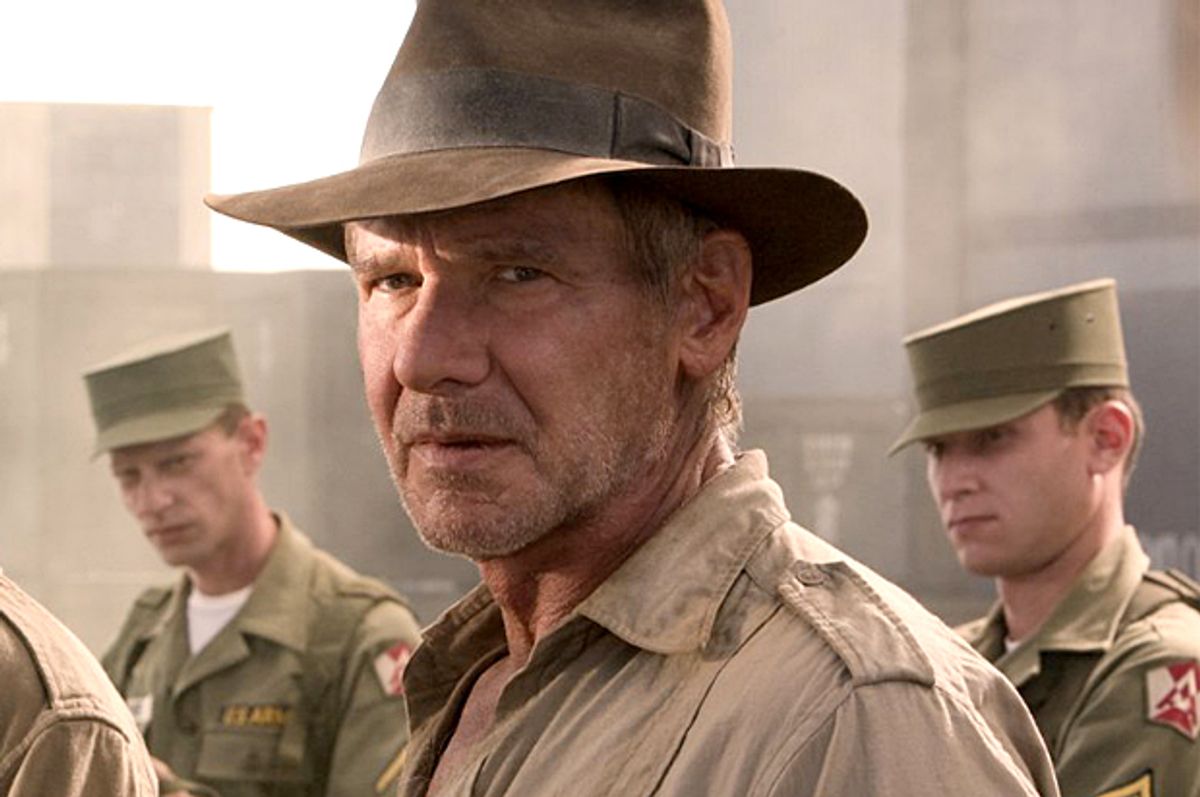 It’s about time we had a hero older than Silly Putty but younger than Yoda.

The concept of an “Indiana Jones 5,” which was announced by Disney on Tuesday, makes us feel a little like we’re at a buffet — it looks like it could be good, but we’re very aware it might make us queasy in the end.

But one truth stands out above all: the return of Harrison Ford, 73, as Indiana Jones offers a rare and welcome cinematic phenomenon: an action hero of advanced age.

The immediate mockery of Ford was all but inevitable on social media.

Age had nothing to do with Ford's failure in the disappointing "Indiana Jones and the Kingdom of the Crystal Skull" (2008). He simply couldn't recapture the qualities that made the character so memorable in the first three films, leaving us thirsting for a taste of that rogue hero.

From "Raiders of the Lost Ark" to "Indiana Jones and the Last Crusade," Ford's Indy was a cranky James Bond in the desert, equipped with a whip and revolver rather than fancy gadgets, governed by a hunger to protect threatened history in the face of organized evil trying to exploit it. He was feisty, quick-witted, vulnerable and funny. By his last incarnation, in "Crystal Skull," he had become a caricature — the byproduct of Ford dusting off a character left on the shelf for 19 years as well as a story lacking any of the intrigue and drama that made its predecessors real heart-racing adventures.

Nonetheless, Ford is Indiana Jones, and any other actor (there was actual dread that Shia LaBeouf would be the heir apparent) would be a betrayal to fans who remember sitting enraptured — whether as youngsters or adults — watching “Raiders of the Lost Ark” unfold back in 1981.

And being in his 70s makes Harrison Ford an exceptionally rare movie hero. The real question about “Indiana Jones 5,” due out in 2019 when Ford will turn 77, is whether Steven Spielberg get a screenwriter to craft a story befitting the iconic hero. If the material isn’t there, there's nothing Ford can do to save things. If it is, expect the star to recapture some of the magic that has made Indy one of pop culture's most beloved figures.

Since its birth, Hollywood has been a young person’s town with a product to match. Producers are always scouting the hot 18-year-old property to push their decrepit 30-year-olds literally out of the picture. And while the cynic may recoil in thinking this is the moldy “respect-your-elders” argument — I’ll take it a step further.  Movies beat us over the head with the notion that valor is a quality reserved for the young. The doctor doesn’t prescribe bravery along with an older person's cholesterol medicine.

Think about it. What immediately comes to mind when you picture characters of retirement age on film? They’re often needy, fragile and infirm, perhaps a thorn in the protagonist's side or maybe just cooking dinner for everyone.

And then there’s the common thread to America’s action heroes. They are dashing, often with Men’s Fitness physiques, can take a dozen punches without bruising and can single-handedly stop an apocalypse. They’re fast, furious and indestructible.  And, of course, they’re usually men who haven’t reached their Viagra years and can still bed the 25-year-old damsel in distress. Even when they die, they don’t.  (It took 35 years to finally kill off Ford’s Han Solo — an act so rare it was national news.)  And they’re increasingly mutant — as Hollywood, with an assist from Marvel,  banks on the superhero summer blockbusters geared toward teenagers to sustain things, at the expense of the sort of adult-oriented cinema that's increasingly the purview of awards' season only. Older audiences are perpetually disregarded at the multiplex. It truly is “Batman” vs. “Birdman” — and (spoiler alert!) Batman always wins.

If you glance at this list of the top movies of 2015, good luck finding many protagonists over 40 besides, coincidentally, Ford as Han Solo in "Star Wars: The Force Awakens."

Additionally, according to 2014 stats by the MPAA, 25 percent of moviegors are 50 and up — so Hollywood is giving short shrift to 35 percent of the total population.

This is why an Indiana Jones in his 70s is exactly what we need. And a realistic one at that. We don’t need a turbo-charged, invincible Indy — brawling, jumping, barreling as if drinking from the Holy Grail actually delivered an eternal life.

Let Indy's brain be his weapon, with the occasional death-defying, wow-inducing moments that actually seem plausible for the weathered, wiser, but still physically adept Indiana.

And after all, if we’re to accept everything we have so far about the Indiana Jones story and character, we can accept his mission wouldn’t end with his first Social Security check.

Of course, we can’t forget that there are indeed superhumans among us even when they’re old enough to bounce grandchildren on their knees. In October, 75-year-old Jim Vernon thwarted a 19-year-old trying to attack kids in a library in Illinois. Last June, Rosemary Caerea, a 70-year-old grandmother, saved a man from a fiery car wreck in North Carolina.

This is why we need a reminder that Hollywood has done a disservice in its portrayal of older Americans. An icon like Indiana Jones can show us that the saviors and masters of the universe usually aren’t always wide-eyed twenty- or thirtysomethings. Those who have been around a lot longer usually have the most to offer.

Plus, let’s be honest for a second. Harrison Ford is still a physical marvel, with the constitution to withstand a crash while piloting the plane. If anyone in Hollywood could convincingly pull off an elder action star, it’s Harrison Ford.

That boulder couldn’t crush Indiana Jones; that “strong bridge” didn’t crash him to rocky water; he knew when to kneel before the blades tore him to pieces, and several dozen birthdays won’t stand in the way of a last adventure or two. But please, no Nazis this time. And no aliens. Definitely no aliens — 1960s hippies would be better villains.