Keep protesting against Donald Trump — but do it the right way

After the recent violence in Chicago, some pundits want protesters to leave Trump alone. That would be a mistake 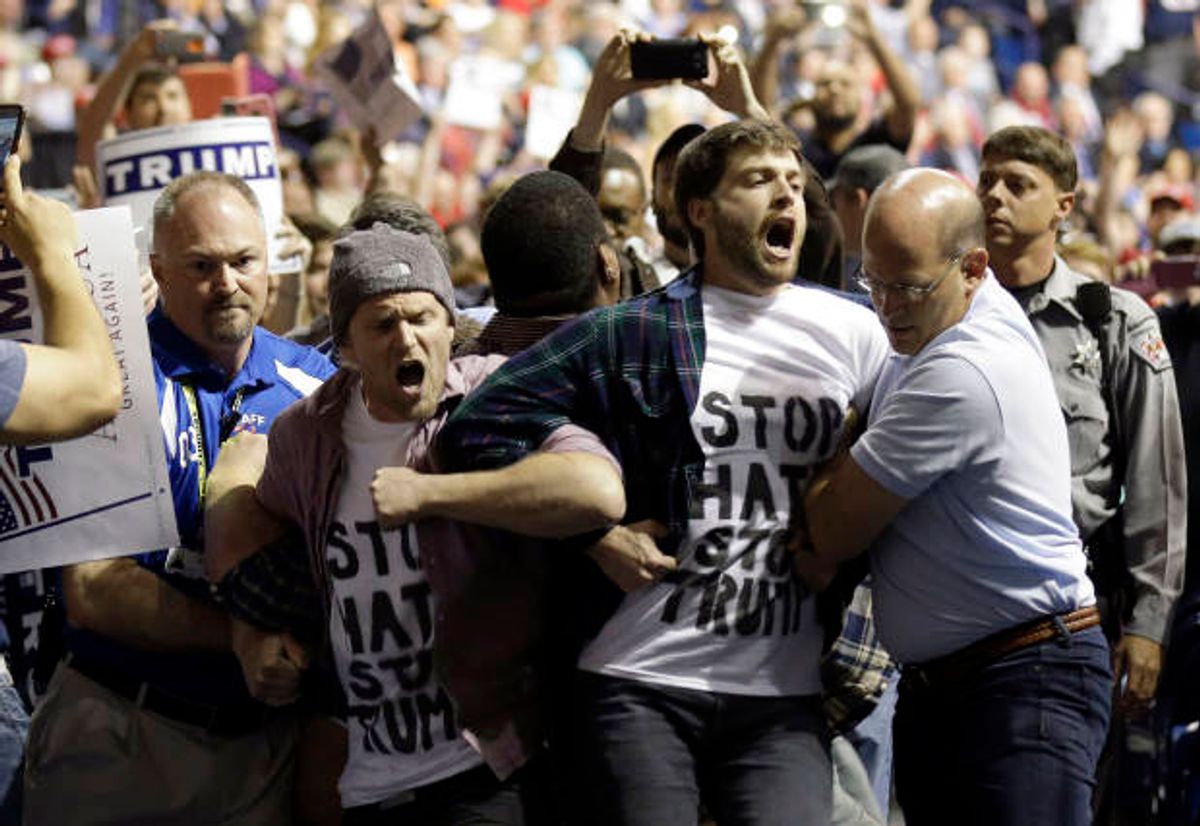 As you probably know already, a Donald Trump campaign rally in Chicago last week was called off at the last minute — and soon thereafter devolved into a street fight between anti-Trump protesters and pro-Trump zealots. (If this is all news to you, I’d recommend reading this report from Rolling Stone by Dan O’Sullivan.)

And, in general, the media’s response has been what you’d expect. Trump’s fondness for brutish rhetoric (which he especially likes to direct toward protesters) and his blasé attitude toward political violence have both been castigated. His most devoted supporters, meanwhile, have been criticized as wannabe Brownshirts and thugs.

But amid the chorus of denunciation, there have been some notes of dissent — especially from the Week’s Damon Linker and New York magazine’s Jonathan Chait, two of the more influential (and more self-consciously centrist) pundits in American journalism today. I think they’re mistaken; but they still deserve to be addressed.

Chait's and Linker’s arguments aren’t identical, but I think a fair summary of their perspective goes like this: While the ultimate bad actor here is Donald Trump, those who show up to his rallies intending to disrupt and protest them shouldn’t get a free pass. Protesting Trump is like “feed[ing] a fire,” according to Linker; trying to “stop Trump from campaigning” is a “horror,” according to Chait.

As Linker himself writes, his argument is about “tactics,” not whether stopping Trump is wrong in and of itself. Chait’s piece, on the other hand, is more moralistic: “[T]he whole premise of democracy,” he writes, “is that rules need to be applied in every case without regard to the merit of the underlying cause to which it is attached.”

Linker thinks it won’t work, in other words, while Chait thinks it’s wrong. I find Linker’s argument a whole lot more sympathetic on the merits. More likely than not, both are incorrect. And the source of their error can be found through what they seem to mean when they talk about “protest.”

Because here’s something you should keep in mind when you think about what happened in Chicago: that was a brawl, not a protest. A tactic of nonviolent disobedience and disruption is one thing. Throwing haymakers is another. The former is an integral part of modern democracy; the latter isn’t, and probably hurts the anti-Trump cause more than it helps.

But as you can see in this MSNBC report on the anti-Trump protesters, sparking a melee was never part of their plan. You can’t control everyone who shows up to a political event, of course; so I won’t say that none of the protesters crossed the line separating political action and political violence. But, overwhelmingly, Trumpists were the ones looking for a riot. And that’s not the protesters’ fault; that’s on them.

Admittedly, that’s more of a response to Linker than to Chait. Linker’s wrong to believe that even a well-organized, nonviolent form of protest will redound to Trump’s benefit; he argues that “anarchy” causes voters to embrace “the toughest, most authoritarian candidate.” But recent American history shows that it doesn’t always go that way, especially not if the protesters are seen as nonviolent victims of thuggish aggression.

Chait, on the other hand, rejects the idea of disrupting a Trump rally, full stop. He says to do so is equivalent to “legitimiz[ing] undemocratic responses.” This is way too conservative a view of democracy for my taste. I think there’s plenty of legitimate political action you can take outside of the voting booth — or the protest pen. But even by his own standards, Chait’s argument here is a whiff.

Why? Because he cites the man who recently tried to rush Trump while he was speaking from a podium as an example of undemocratic protest — which it isn’t. That’s not well-organized and nonviolent civil disobedience; that’s a lone thrill seeker being utterly reckless. The former is grounded in a sophisticated and considered theory of political action. The latter is, simply put, a jackass.

Now, if all forms of protest against Trump looked like that guy, I’d agree with Linker (and Chait, too, for that matter). Stuff like that quite likely does hurt the burgeoning anti-Trump movement. But peacefully and calmly registering your dissent against a pseudo-fascist is something else entirely. And in the weeks and months to come, I hope we see more of it, not less.