Leave Beyoncé alone: Feminists criticizing her pride as a mother are missing the point

Beyoncé's feminism is under constant scrutiny, especially when she doesn't follow the established script 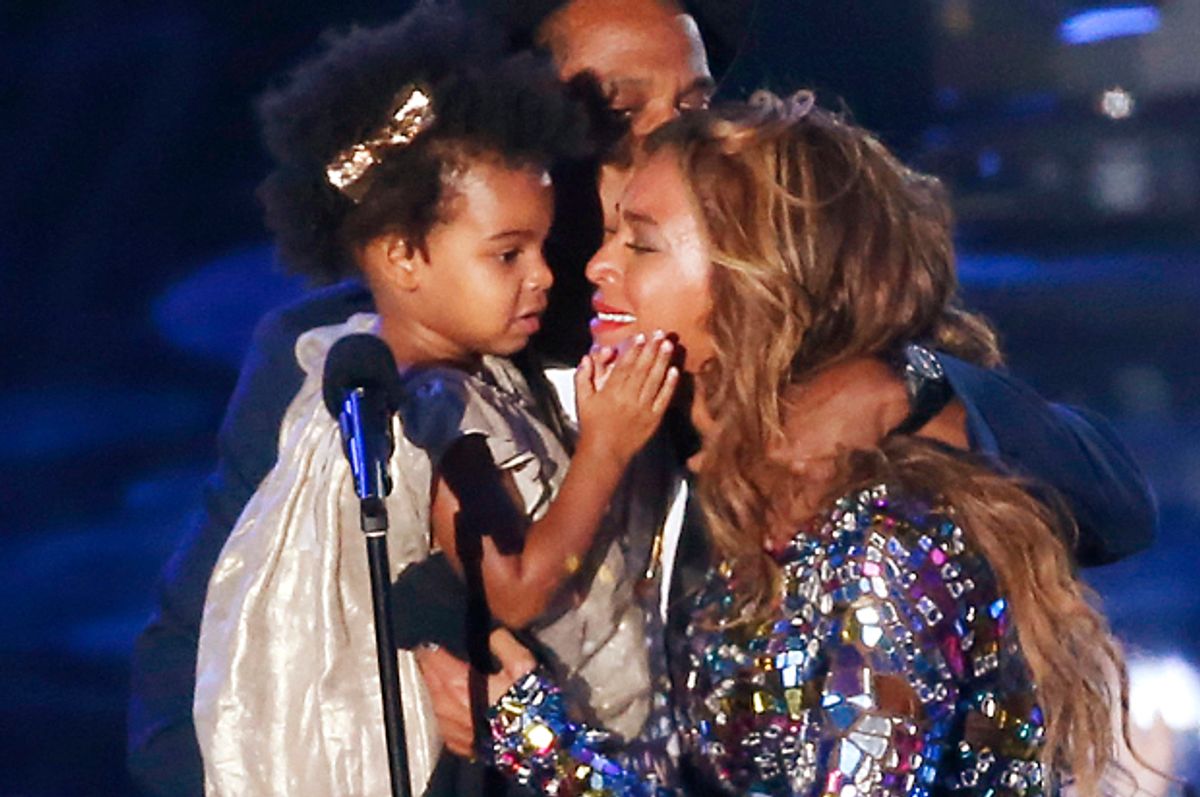 In every interview I've had in the last seven years, when asked about my biggest accomplishment, I've responded unequivocally, "My son." Some interviewers smiled genuinely. Others gave the obligatory polite smile while their eyes told me they were annoyed I'd bring up something so personal in a professional setting. I never regretted my answer, and was always eager to expound, not just to brag about my baby, but to connect for them all the ways in which growing, nurturing, grooming and raising life challenged me to be a better woman, translating most relevantly to being a better professional.

Knowing how much I adore my own child, I am never surprised that other parents feel the same. So even when a superstar like Beyonce is asked about her greatest accomplishment, and responds, "Out of everything I've accomplished, my proudest moment, hands-down, was when I gave birth to my daughter, Blue," I'm totally unsurprised. But per usual, feminists tell us that feminism decrees that women always be mindful of its ever evolving and increasingly restrictive tenets, crafting their responses as such, even at the expense of the woman's autonomy.

It's worth noting that Beyoncé's status as a feminist is a hot topic in the world of feminism. From essays to interviews, just about anytime any notable feminist has the floor, you'll find critiques or endorsements of how the "Drunk in Love" singer uses her platform to further or set back the fight for women's equality. From Annie Lenox's dubbing Knowles' brand of feminism "feminist lite", declaring, "I'm sorry. It's tokenistic to me," to Guardian columnist Hadley Freeman haranguing Knowles for posing in GQ, proclaiming that "being photographed in your underwear doesn't help feminism," there's never a shortage of reprimands of the star's representation of women and feminism.

Whether Beyoncé is a feminist or not is another argument for another writer and another time. I'm not keen on challenging women on their self-identification as feminists, nor do I confer the title upon them without them first having identified as such since it brings with it a myriad of restrictions and expectations. I am, however, becoming increasingly vexed with the feminist propensity to hypocritically chide women for expressing any opinion about their own lived experiences which doesn't fit the standard feminist script.

Most of my frustration with feminism, particularly white feminism, is that while the alleged ideology is the liberation of all women, the liberation can be as confining as the oppression it claims to oppose. It seems as if women are only considered strong when we totally abandon all traditional perspectives, not because they are concretely or innately oppressive but purely because they are traditional. Responding to Beyonce's declaration about motherhood, a senior staff writer at Mic muses, "Given the hurdles most working moms must overcome, then, wouldn't it be refreshing for one of the most professionally accomplished women in the world to value her career and family accomplishments equally? To say, 'You know what? I really love being a mom, but I'm most proud of the work I've done'?"

I suppose Beyoncé valuing her professional success over her success as a parent could be refreshing, but the question is, refreshing for whom? Personally, I'd be less than eager to hear Beyoncé say the capricious adoration of the masses, award statues and revenue that comes with superstardom are a greater source of pride than the unconditional love and indescribable fulfillment of parenting. Just because motherhood is traditionally and unfairly used as a marker of full womanhood does not mean that it is not for many women a personal pinnacle of their own womanhood. The feminist quest to empower women is dangerously counterproductive if it defines empowerment simply as antonymous to patriarchy. To invalidate a woman's feeling because you think she should be presenting another message to the world is ironically a principle of patriarchy.

In this case though, the problem with the criticism of Beyoncé naming Blue Ivy her crowning achievement isn't simply that feminists are out of line for attempting to police her pride, but that they completely ignore that despite fans all over the world being enamored with her, Beyoncé's fitness and legitimacy as a mother have been challenged, ridiculed and demeaned since she announced her pregnancy at the MTV VMAs in September 2011. From the laughable conspiracy theory that Beyoncé did not carry Blue Ivy and instead used a surrogate to the appalling petition to "comb Blue Ivy's hair," the public and the media have proven that even the sacred institutions of motherhood and childhood are not off limits. So it makes absolute sense that Beyoncé would be compelled to affirm that regardless of the speculation, her journey with her daughter is paramount in her life. And to wish that she'd instead given a response less typical because it would be better for feminism is characteristic of the domineering egotism perpetrated by those who claim to fight for me and all women.

As a woman, I don't need anyone dictating what frees me, especially not women who claim to be the voice of all women, yet seek to minimize the transcendent power and love that some women feel from motherhood. I don't need women who argue for wage equality by shouting the statistic that women make 77 cents for every dollar men make while ignoring that black women like me make just 64 cents on the dollar compared to white men telling me that if I work hard enough and am lucky enough to be given the spoils of success, I am then almost obligated to appreciate that combination of favor and work more than I do the kisses planted on my cheek and "I Love You" uttered from the mouth of my child. Just as we shouldn't try to pressure women who opt not to have children into having children just because it is viewed as a rite of passage, we have no right to expect that women who choose to be mothers either downplay the importance of that role in their lives to strike a blow against patriarchy, or work to change their mindset so that they no longer hold motherhood in irreproachable esteem.

If feminists truly seek to liberate all women, that liberation must be complete and total, lifting the boot of all oppressors and the systems they dictate. Of course, men all over the world wield power that comes at the expense of women. But when women charge in, crowning themselves liberators with a list of rules for freedom as long and limiting as those of the men who motivated the fight in the first place, they only adorn the chains in rhinestone and glitter instead of breaking them.