Forecasting the GOP convention clustermuck: If Republicans try to ditch Trump, who do they pick instead?

Could Republicans try to nominated Mitt Romney again? Or Paul Ryan? We walk through the (hilarious) options 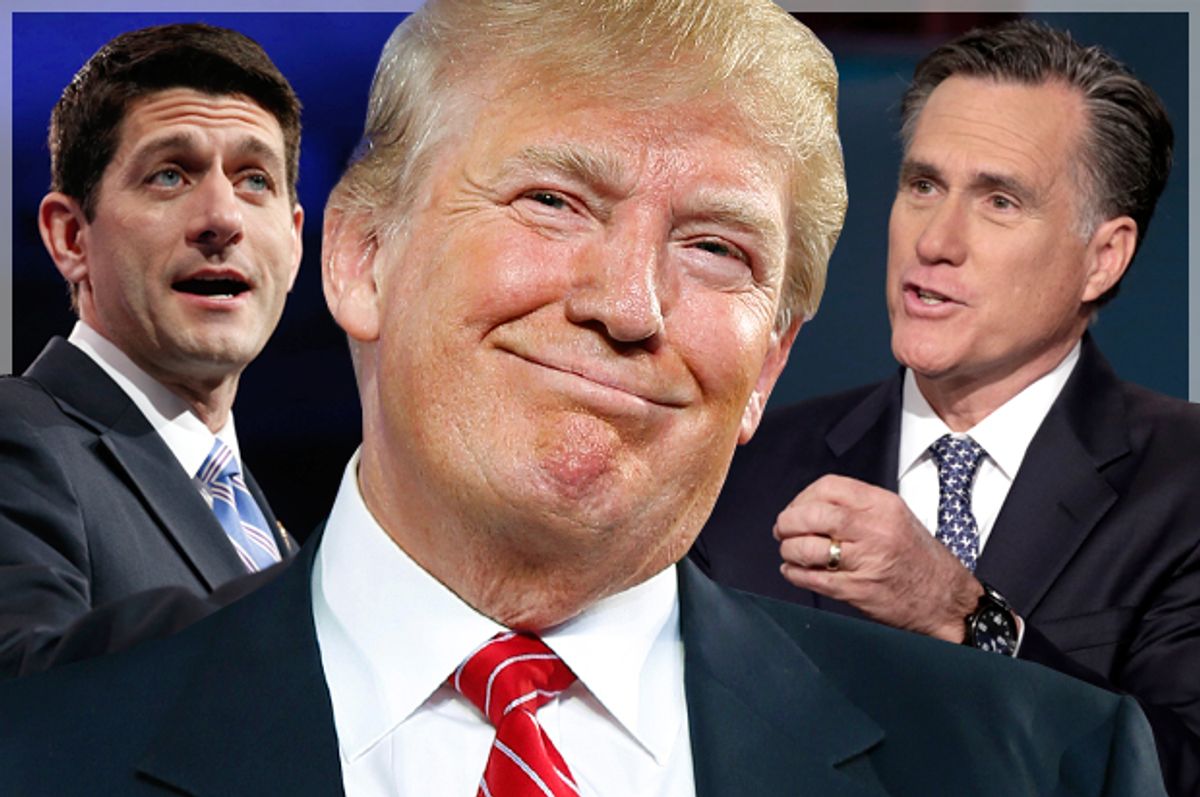 Congratulations to the city of Cleveland, whose 2016 fortunes are looking up. This is because, for once, its beloved Browns are likely to be only the second-biggest dumpster fire to rage out of control in the Ohio metropolis this year.

Yes, the Republican National Convention is coming to town this summer, and right now there is a chance it could be the greatest spectacle to hit the city since that time the Cuyahoga River caught on fire. The chances for a brokered convention are remote, but not out of the realm of possibility. Though Donald Trump has a large enough delegate lead at the moment that it is almost mathematically impossible for Ted Cruz to catch him, the “Stop Trump” forces will likely still be doing all they can through whatever methods are available – pushing through rules changes for the selection process, convincing pledged Trump delegates to flout the rules and support another candidate if they can, kidnapping and driving them down to western Kentucky to be tossed down an abandoned coal shaft if they can’t – to keep the Orange One from becoming the party’s standard-bearer.

If it can keep Trump from earning the nomination on the convention’s first ballot and not enough delegates will back Cruz or John Kasich (whose plan for seizing the nomination supposedly relies on a floor fight, since he’s too far back in the race to win enough delegates in the remaining primaries), the “Stop Trump” movement can push for a compromise candidate on the second and subsequent ballots.

Of course, Reince Preibus is doing all he can to tamp down on the speculation of convention chaos. But that’s his job as the party chairman and unofficial killjoy. Is there anyone alive who has any faith in his ability to keep the lid on the boiling cauldron of angry vipers who will be slithering around the Quicken Loans Arena in the middle of a hot summer? On the other hand, is there anyone alive who believes there is a movement within the GOP organized enough to pull off the multi-step chicanery required for a palace coup to knock out Trump without setting off riots?

Just in case, though, the names of possible compromise candidates are floating around. Let’s take a look at the case for a few of them.

Mitt Romney – This is funny for multiple reasons, not the least of which is that Romney was basically a compromise candidate in 2012, when the establishment was still capable of putting down a rebellion from the angry grass roots.

This cycle, Romney announced early on that he would stay out of the race. Speculation at the time was that he was mostly afraid of getting stomped by establishment favorite Jeb Bush, which is even funnier to consider now than it was 14 months ago.

Since then, though, Romney has made sure that Republican voters remember his name and face, and that he’s probably not doing much with his time these days. He has gone on talk shows to claim that “other people” are pushing him to jump in the race. He popped up a few weeks ago to give a speech excoriating Trump and his brand of angry, incoherent politics. Anyone outside the Republican Party bubble could have told him that this appearance only helped Trump, whose fans are in no mood to hear lectures on how to conduct politics from the last guy who got beat by the Kenyan Pretender in what they are sure was  an otherwise winnable election. But Romney, with his usual cluelessness, seemed to either assume that the base could be reasoned with, or was under the delusion that there is some sort of organized resistance to Trump within the GOP establishment. And per usual, he was wrong on both counts.

Yet as recently as not quite two weeks ago, Romney was still reminding the party that he’s available to be its reluctant but duty-bound savior -- you know, if it wants, he’s not going to beg or anything, it’s just that he can’t say no when you look at him with those pleading puppy-dog eyes and OH WHY WON’T YOU QUIT BEING COY AND BEG MITT ROMNEY TO SAVE YOU ALREADY!

The thought of Mitt Romney engaging in the type of bare-knuckled convention-floor fight he would need in order to grab the nomination should bring on a fit of giggles to anyone who considers it for more than three seconds. The patrician Mitt Romney against the tough guy from Queens, Donald Trump. Presidential politics really are like wrestling.

Paul Ryan – The guy the Republican Party keeps turning to as its savior in desperate situations, despite the fact that he has never saved it from a thing. Ryan reluctantly stepped up to take the speaker of the House job last fall after John Boehner’s sudden retirement, but he made it clear that he would only do so if the party promised him, a) he could have weekends off to hang out with his family in Wisconsin, and b) that the far-right hyenas in his caucus would agree not to chew his kneecaps off for minor offenses such as shaking hands with President Obama or trying to keep the government open and functioning.

How well is that working out for Ryan? Well, the far-right hyenas, otherwise known as the House Freedom Caucus, went along at first, albeit with a lot of grumbling. The détente lasted for about as long as it took for the House Republicans to start working on a budget for 2017. This week the HFC announced it would not support the budget as written, leading Politico to declare it all but dead. Meanwhile, Ryan announced he wouldn’t try to jam the budget through the House using Democratic votes -- probably because he knows that could mean the end of him occupying the job he so reluctantly agreed to take in the first place.

What this means from a practical point of view is that the House will not pass a budget for the next fiscal year (again) and will have to keep the government running through the usual series of stopgap emergency spending resolutions. Which is exactly how things ran under Boehner. About the only notable difference between the House now and last September is that the Speaker’s Office doesn’t smell like a Marlboro factory.

The irony is that it was Boehner himself this week who publicly suggested Ryan as a compromise candidate. Ryan was quick to put the kibosh on that talk. Though he has let it be known that he’s not happy with Trump’s brand of politics, he still has to deal with the right wing of his caucus. If he can’t get them to work with him in the House, how is he supposed to rally the entire hard right around him in a presidential run? Besides, he’s already got the stink of being the vice-presidential candidate in Romney’s losing 2012 effort on him.

Marco Rubio – Sure he officially suspended his campaign, but come on, Republicans. Are you really going to ignore all those solid third-place finishes he racked up during the primaries?

Surely there are some other names that will come up between now and the convention, though it’s hard to think up any GOP stars who would be more acceptable than the reprobates I’ve already listed. This campaign was supposed to have the deepest GOP bench of contenders in 40 years, an assumption that lasted until it ran into the buzzsaw that is an incoherently angry electorate the party has spent those same 40 years cultivating with lies and propaganda. Some of them are likely in denial still. Can anyone imagine the candidate who could put the lid back on this jar?