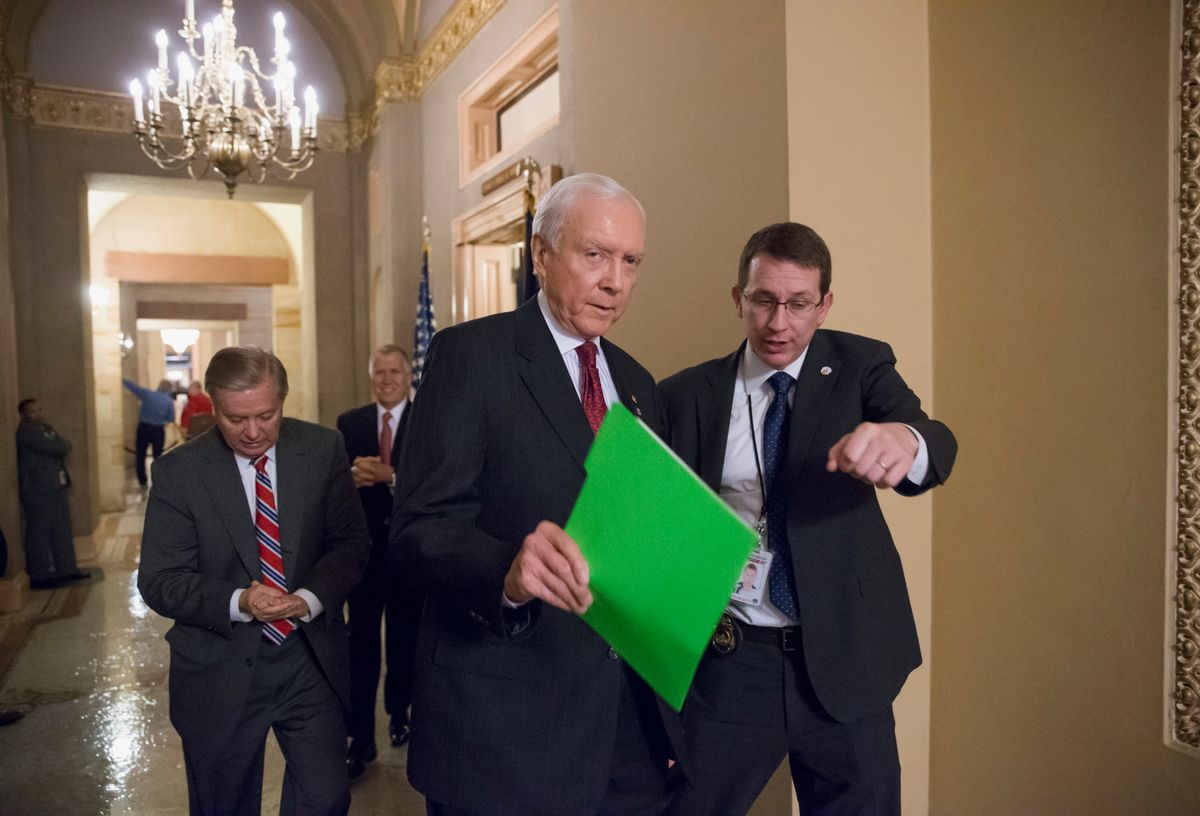 Members of the Senate Judiciary Committee, Sen. Orrin Hatch, R-Utah, center, followed by Sen. Lindsey Graham, R-S.C., left, and Sen. Thom Tillis, R-N.C., rear, leave a closed meeting in the office of Senate Majority Leader Mitch McConnell of Ky., on Capitol Hill in Washington, Tuesday, Feb. 23, 2016. Senate Republicans, most notably Senator McConnell, are facing a high-stakes political showdown with President Barack Obama sparked by the recent death of Supreme Court Justice Antonin Scalia. Republicans controlling the Senate  which must confirm any Obama appointee before the individual is seated on the court  say that the decision is too important to be determined by a lame-duck president. (AP Photo/J. Scott Applewhite) (AP)
--

As I and others have explained several times now, the fight over who gets to appoint Antonin Scalia’s successor to the Supreme Court is about one thing only: power. When news of Scalia’s death came down, Republicans recognized the threat posed to their policy agenda by a Supreme Court that isn’t dominated by conservatives, so they moved with faster-than-light speed to squash the very idea of President Obama nominating a new justice. Having staked out their position, they set about filling in a spurious back story to justify their obstructionism. What they came up with was the “principle” (presented as inviolate even though they’d literally just made it up) that presidents in their last year in office don’t get to nominate Supreme Court justices. There’s an election coming, they argued, and the American people should have a say in who gets a lifetime appointment to the high court.

It’s a weak argument – Obama was elected twice but those votes mean less than an election that hasn’t happened yet? – but the weakness didn’t really matter so long as they stuck to it. The most important thing they had to do was adhere to blanket obstructionism to keep Obama from getting another justice on the court. In the meantime they’d hope that the political damage wouldn’t be too severe, and trust that a Republican would win the White House in November. But now that Obama has actually selected his nominee – moderate D.C. Circuit Court Judge Merrick Garland – Republicans in the Senate are busily stomping all over their own ridiculous case for obstructionism.

Utah Sen. Orrin Hatch, as one of the senior Republicans on the Senate Judiciary Committee, has been a key spokesman for the obstructionist cause. By picking Garland, however, Obama put Hatch in a bit of a difficult position, given the effusive praise Hatch has heaped on Garland in the past, even once saying there would be “no question” that “consensus nominee” Garland would be confirmed by the Senate. None of that praise is quite so damaging to the Republicans’ obstructionist case, however, as this comment from Hatch regarding the possibility of confirming Garland after the November election, but before Obama’s successor is sworn in:

He signaled Wednesday, however, that he was open to moving Garland's nomination in a lame duck session after the election in November, presumably only if a Democrat wins the White House.

"I'd probably be open to resolving this in the lame duck," Hatch said according to a tweet from a reporter closer to Hatch in the scrum.

"He is a good man, but he shouldn't be brought up in this toxic environment," Hatch told reporters Wednesday. "I am tired of the Supreme Court being used as a battering ball back and forth on both sides. That is why I'd put it off till next year."

Hatch’s willingness to consider Garland’s nomination during the lame-duck session is apparently shared by several of his colleagues who, according to NPR’s Nina Totenberg, communicated as much to the White House through “some sort of a back channel message.”

If your position is that the American people should have a say in who selects the next Supreme Court justice, then obviously it doesn’t make any sense to vote to confirm Obama’s nominee at any point during the remainder of his presidency. But doing so during the lame-duck session would be the most flagrant violation of that so-called principle imaginable. Not only would you be considering the nominee of a president whose successor had been chosen, you’d also potentially have several senators who’d been voted out of office voting to confirm or deny that nominee. Hatch and his colleagues say they want the American people to have their say, but they’re also open to defying the people once they’ve spoken.

Why would they stake out this wildly inconsistent position? The answer is likely that Merrick Garland, as Hatch’s previous comments make clear, is someone that Republicans can live with if forced to. Or, to put it another way, he’d be the least bad option they could hope for from a Democratic president. If a Republican wins in November, they can just keep obstructing and wait for the new president to nominate a conservative judge. If Hillary Clinton or Bernie Sanders wins, they might try to move forward on Garland as a way to deny the new Democratic president the chance to pick a truly liberal justice. That would, of course, be brashly hypocritical and a gross violation of the “principle” they claim to be standing on now. But, again, this has never been about principle.