Inside Merrick Garland's troubling record: Why he could take the Supreme Court right in one very important regard

No one is saying that Merrick Garland is a conservative, but his stance on criminal justice is cause for concern 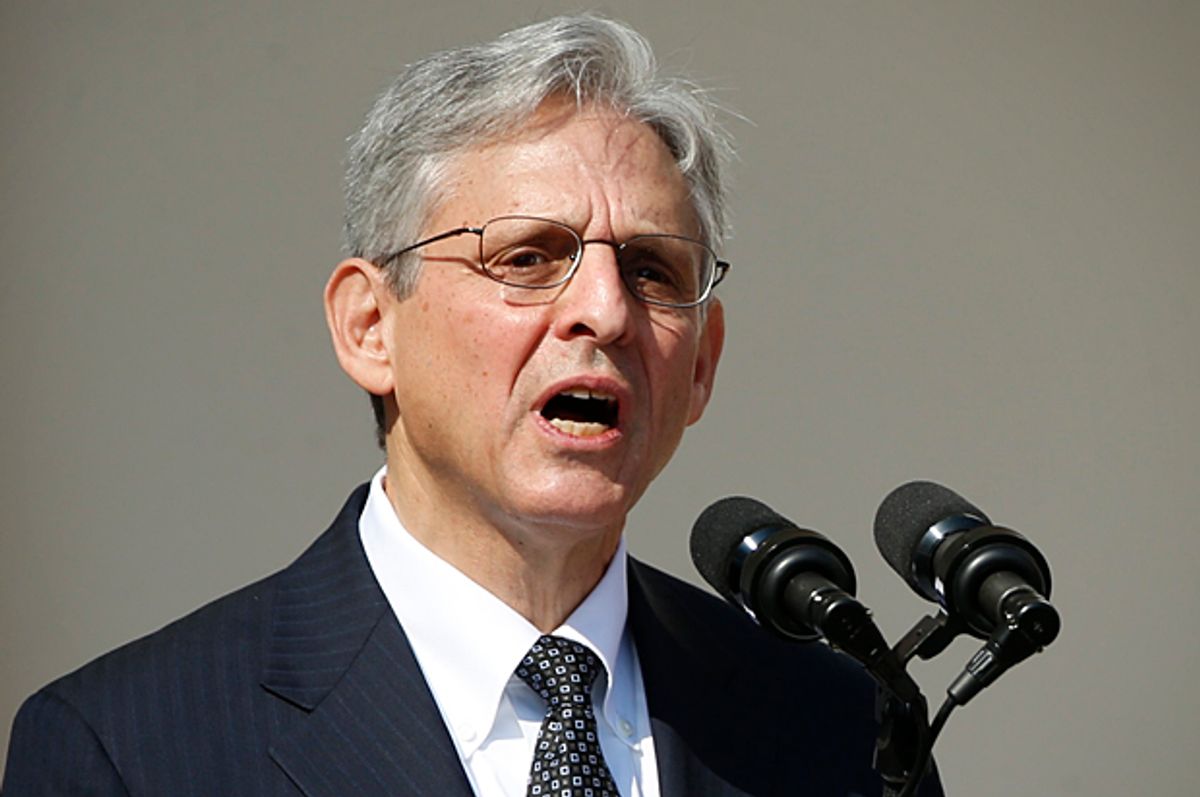 Pointing to government-friendly rulings on police illegal searches and seizures and Guantánamo detainee rights, some criminal justice reform advocates are greeting President Obama’s nomination of Merrick Garland to the Supreme Court with skepticism.

No one is saying that Garland, the current chief judge of the D.C. Circuit Court, is a conservative. But there is concern that Garland, a former prosecutor nominated by a president with a penchant for nominating prosecutors, could hold the line on criminal law, or even move it to the right, at a time of growing consensus that the system must be radically reformed and downsized. For all of Justice Antonin Scalia’s bigoted faults, he was, as Radley Balko notes, “comparatively good on the 4th, 6th Amendments.”

“Garland may actually move SCOTUS to the *right* on criminal justice," Balko tweeted. "It's just a boring, status quo, baffling pick from a president who allegedly wants criminal justice reform to be part of his legacy.”

Garland's record is particularly troubling when it comes to his deference to police and prosecutors, including the suppression of evidence allegedly obtained by way of an unconstitutional police search:

“Judge Garland rarely votes in favor of criminal defendants' appeals of their convictions,” SCOTUSblog publisher Tom Goldstein wrote in 2010 when Garland’s name was in the mix. “In ten criminal cases, Judge Garland has disagreed with his more-liberal colleagues; in each, he adopted the position that was more favorable to the government or declined to reach a question on which the majority of the court had adopted a position favorable to a defendant. Because disagreement among panel members on the D.C. Circuit is relatively rare, this substantial body of cases is noteworthy.”

That year, the New York Times echoed that analysis, writing that “his rulings suggest that he could be more of a center-right justice in matters of criminal law.”

It’s not a lot of cases to go on. But it’s worth considering.

Civil libertarians have also been troubled by Judge Garland’s ruling on detainee rights.

In 2003, Garland and two conservative judges ruled ruled against Guantánamo prisoners challenging their detention in federal court, finding that the courts lacked habeas corpus jurisdiction. From a civil liberties perspective, denying the right of someone detained by the government to have that detention reviewed by a judge is profoundly unsettling. Goldstein argues, however, that the move doesn’t necessarily reflect his ideological predispositions: No other member of the court called for rehearing the case before all the circuit judges, known as an en banc review; it may very well have been a response to what was then binding Supreme Court precedent. The Supreme Court later overruled the decision.

To be fair, Garland is not uniformly hostile to detainees. In 2009, for example, he dissented from a majority ruling dismissing Iraqi claims against Abu Ghraib contractors. And the prior year, he ruled against an en banc review of a pro-detainee ruling in the critical case Bismullah v. Gates, which required the government to produce more information, relating to the determination that the detainees were combatants, than the government argued was safe to release. But Garland declined to join his liberal colleagues’ more expansive concurrence. Instead, he simply stated that “delaying” the case would force the Supreme Court to hold up its decision on a separate case, and thus “is contrary to the interests of all of the parties.”

It’s unclear how Garland might come down on other cases that could make waves in helping to force an end to mass incarceration. One critical area is the Eighth Amendment, which bars cruel and unusual punishment, and a new justice could take a much harder look at the constitutionality of disproportionately harsh sentences. In recent years, as I discussed last month, the Supreme Court has barred executing people for crimes committed as juveniles as well has handing down mandatory life without parole sentences for such crimes. It has also ruled against the death penalty for rape. There is a possibility that a progressive majority on the court could overturn past rulings and deepen its reading of the Eighth Amendment, ending the death penalty, barring life without parole for non-homicide offenders, and cracking down on prison conditions to such an extent that it forces a measure of decarceration.

Kadidal, for one, says that if Garland turns out to be a big disappointment, it’s no accident.

“There are other people Obama could've nominated to make the Senate Republicans look stupid,” he emails. “Naming a guy this cautious, who's been a judge for years and years and yet has nothing bold or terribly controversial in his record of judicial decision-making, makes me think this is actually the person that our temperamentally-conservative president actually wants to see on the court, and not some sacrificial lamb.”

Abortion rights are an important litmus test for court appointments. But it's not enough. The judiciary has the awesome power to check unconstitutional decisions made by majority rule. That's nowhere more important than when elected officials riding high on the public passions they exploited into office seek to harshly punish and strip rights away from the most despised people in our society: those accused of committing crimes. Forty-one percent of Obama's nominees had been prosecutors as of a July 2015 report from the Alliance for Justice. If the United States is going to remake its criminal justice system and end mass incarceration, then judicial nominations matter tremendously. This one should give advocates pause.