John Boehner is laying the groundwork for a "Draft Ryan" campaign at the GOP convention. The whole thing is absurd 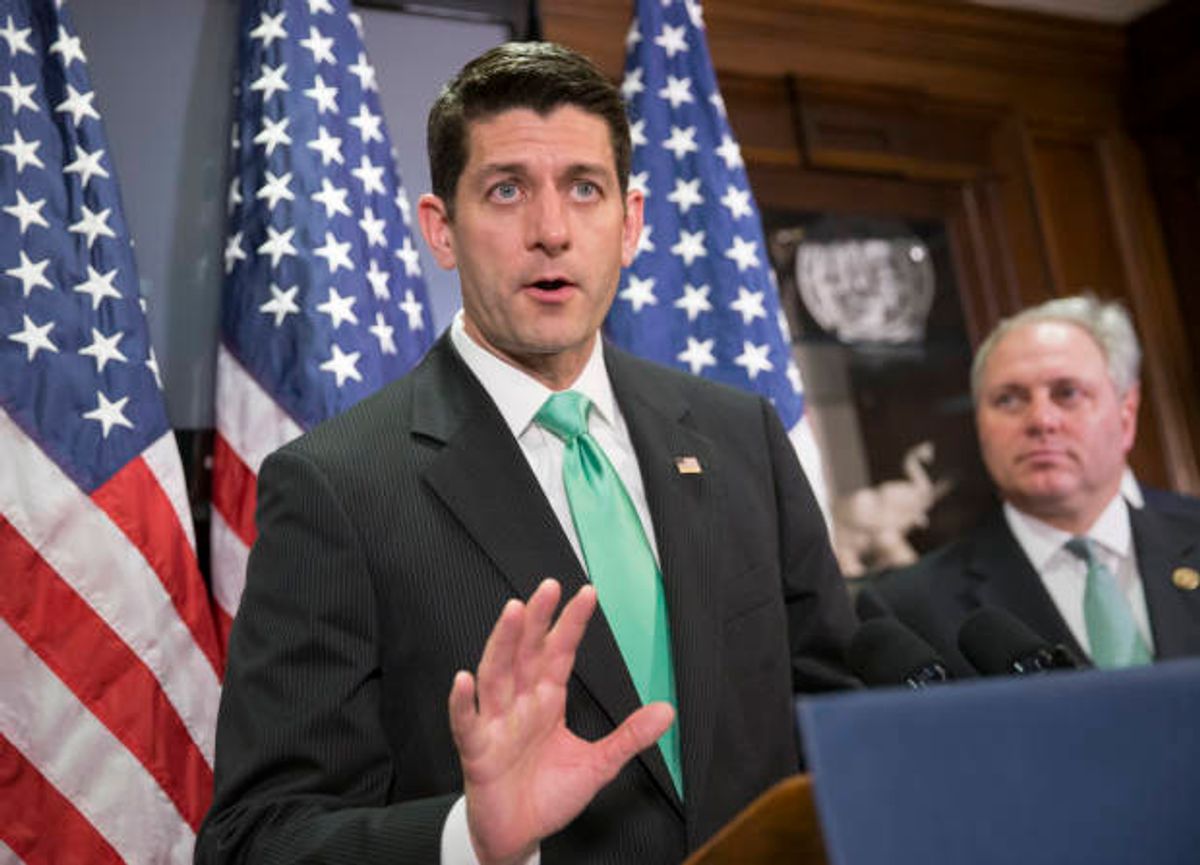 As if he hadn’t made Paul Ryan fix his mistakes enough already, former Speaker of the House John Boehner said on Wednesday that he thinks the one-time vice presidential nominee — and current House speaker — should be the Republican Party’s presidential pick if no one has won the nomination outright by the time of the party’s convention.

Here’s how the first orange speaker in U.S. history put it, according to Politico:

Not exactly a clarion call, to be sure. But when you keep in mind that Boehner referred to Sen. Ted Cruz, the only guy with a realistic shot (and it’s not that realistic) at defeating Donald Trump, as “Lucifer,” the subtext is pretty clear:

Boehner … had long whispered to friends that he believes Ryan could be the party's political savior if it came to that.

But Boehner never said it publicly until now.

In the same question-and-answer session here, Boehner referred to Ted Cruz as "lucifer." He previously called the Texas senator, who led the failed Republican effort to shut down the government over Obamacare, a “jackass.”

Ryan, for his part, has said he is not interested in being commander-in-chief. He says he “consciously” decided not to seek the office, in fact.

But because Ryan didn’t take a so-called “Shermanesque” vow that he would rather be eaten alive by a pack of ravenous squirrels than accept the Republican Party’s presidential nomination, some folks in the media have decided that what he really meant when he said he didn’t want to run was, in fact, that he very much did.

For example, check out the way a writer at the Washington Post’s “The Fix” blog — a reliable font of conventional wisdom for those who cannot bear to wait until Sunday morning’s “Meet the Press” — reacted to the Ryan interview. They don’t make a mountain out of molehill so much as they erect a new tower of Babel from a grain of sand:

Ryan's interview is creating buzz … for two reasons: One, he's one of Republicans' undisputed leaders. He's the speaker of the House. He's in charge of presiding over the convention itself. And he's the party's 2012 vice presidential nominee.

So far, so good. All of those things are definitely literally true. What about the second reason, though?

[T]wo, his interview with Harwood came as Donald Trump was in the process of sweeping at least three, and possibly four, of the five states voting in the GOP nominating process on Tuesday. The realization is sinking in among Republicans, Tuesday by Tuesday, that Trump is the most likely candidate to be their nominee (though a contested convention is also possible).

That said, the Fix is certainly right about this much: Donald Trump is in the best position, by far, to win the Republican Party’s nomination — and GOP leadership has no idea what the hell they should do. It’s also not outside the realm of possibility that some of them believe Ryan will, once again, take the job that no one else seems to want. So, sure, it’s conceivable that a Draft Ryan movement could take hold.

But if it does, it won’t be a testament to the quick and crafty thinking of Republican Party bigwigs. On the contrary, if they think Ryan is the solution to what ails them, it’ll just go to show how utterly, completely and thoroughly out of touch they really are. Because whatever’s driving Republicans into Trump’s arms, Ryan doesn’t have it.

Think about it. Let’s say we subscribe to the theory that the Trump phenomenon is a reaction to the Republican Party’s taking the white working class for granted. Let’s say we agree that party leaders can pull voters out of Trump’s orbit so long as they embrace a more “reformicon” agenda and take a step back from their (highly selective) libertarianism. Is Paul Ryan a logical vehicle for this change?

No, he is not. Not even a little bit. For God’s sake, this is Paul Ryan we’re talking about; the guy with dogeared copies of “Atlas Shrugged” strewn about his offices; the guy who not only never met a free trade provision he didn’t like, but still supports the dreaded “amnesty,” at least as far as we know. Paul Ryan, the career politician who’s every D.C. reporter’s favorite Republican, that’s your working class hero? Good luck.

Unfortunately for Republicans, even if you drop the working-class theory as an explanation for Trump, the logic behind a Ryan nomination is still incredibly weak.

Ryan may not be much of an Everyman; but isn’t he at least a Tea Party “outsider”? No, not remotely. He’s a former would-be vice president — the one-time sidekick to the hated Mitt Romney — and as much a part of the GOP elite as anybody. He’s no bomb-thrower. That’s why he’s such a powerhouse fundraiser and Wall Street favorite; that’s why he was Boehner’s handpicked successor as speaker of the House.

Well, what if installing Ryan, through a process that many Republicans will see as a coup, isn’t really about GOP voters? Maybe the goal instead is to maintain the party’s appeal to moderate and center-right voters. That’s a somewhat better case, I’ll admit, but not because of anything to do with the far-right Ryan, but rather because of the press. And if Republicans want to campaign with the media as their base, that’s their prerogative — but I know one soon-to-be ex-senator who’d advise them to think twice.

Any way you slice it, a Ryan nomination just doesn’t make much sense. And we haven’t even mentioned how incredibly unlikely it is that Ryan would want to do this, anyway! (Generally speaking, the kind of folks who come within a hair’s breadth of the presidency aren’t into martyring themselves for lost causes.) So maybe whether Ryan would or wouldn’t want to run is not the most important takeaway here.

Maybe the real lesson is that Boehner, and the many other “establishment” Republicans like him, remain a universe away from having even a semblance of a clue.