Stop measuring your "A4 waist": This meme is the latest way the Internet measures women's worth

Add this one to the thigh gap, the underboob challenge and other damaging body-shape tropes 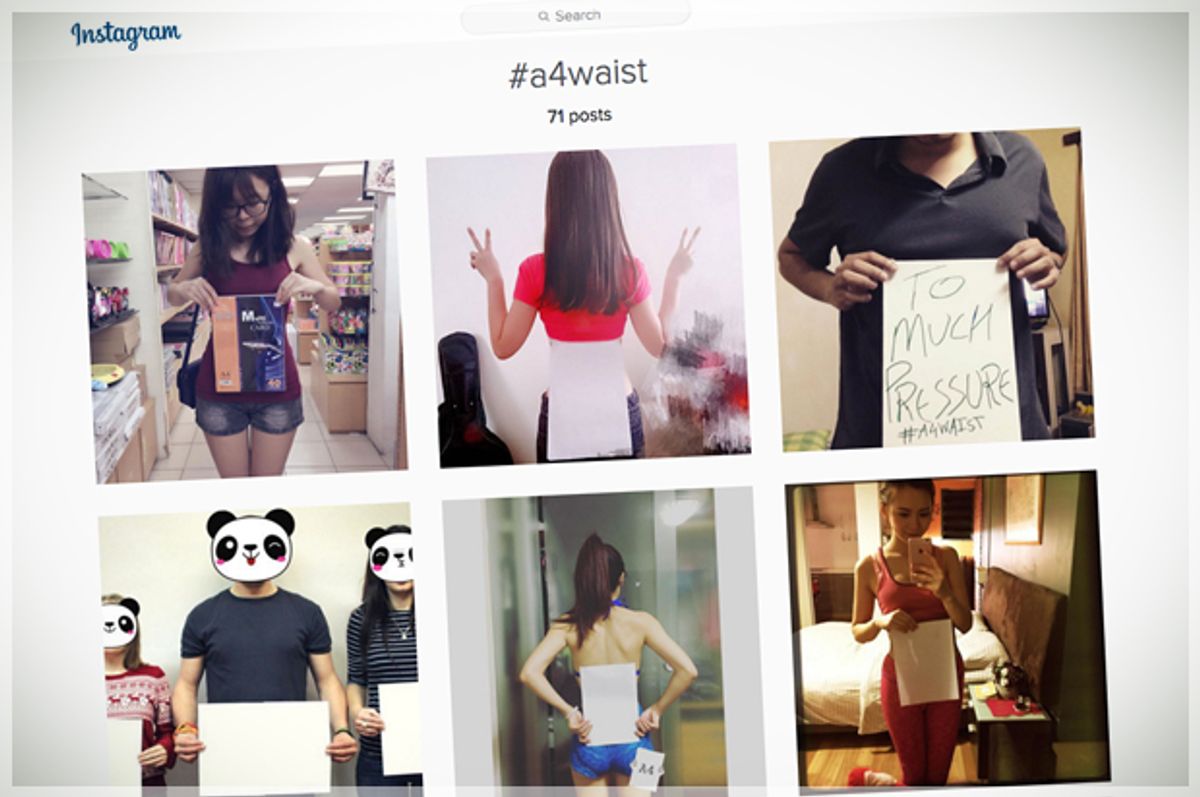 Because thinness is not just a state of being but a competitive sport, social media keeps finding new ways for people to brag about how small a person can make herself. The latest: Are you as narrow as a letter-sized piece of paper?

For most of us, the answer to that question is, I'm sorry but WTF are you talking about? But as Mashable's Alicia Tan reports, "The A4 waist challenge started in China around February and has seen hordes of Chinese women taking to their Weibo accounts to show off their trim waistlines." The idea is simple — snap a selfie holding an ordinary piece of A4 printer paper in front of your midsection, thereby demonstrating that your waist is tinier than an item that measures 8.27 inches across. Tan reports that "Since the challenge took off, Weibo now has millions of photos with the hashtag #A4waist." The trend has recently begun moving over to Instagram. #GOALS, am I right?

The A4 challenge is just another in a long string of ridiculous social media trends in which women are encouraged to offer evidence of their tininess. The most durable has been the notorious thigh gap boast. Though the term is verboten on Instagram, the concept persists — demonstrate that when you stand with your feet and knees together, a breeze could still pass between the upper half of your legs. Of course, the wider the gap, the more successful the achievement. The trend has become so extreme that last year, controversy arose when Huggies was accused of photoshopping a thigh gap on a diaper clad toddler. Urban Outfitters has also come under fire after it was ordered by the British Advertising Standards Authority to remove an image of an underwear model's legs with a seemingly unnatural distance between them.

More recent challenges have included the underboob pen one — which, technically, has been around for decades before Instagram — stick a writing device under your bra-free breasts, and if it doesn't fall to the ground, your breasts are too big or too saggy or somehow generally losing at life. We have Weibo to thank for this one's resurgence too. Hey, at least it turns out that pens aren't completely obsolete. Brilliantly, the meme has also spawned imitations, with generously proportioned men showing off their own pen-laden underboobs, and squishy midsections converted into coin holders. There has also been the belly button challenge, in which victory is attained by documenting the snaking of your arm behind your back to touch your navel. This, ostensibly, is another marker of just how diminutive your waist is, though as the Atlantic has pointed out, "It’s actually a test of shoulder flexibility, not fitness" and besides, "Even if you can touch your belly button, that doesn’t change the fact that no one likes a gloater."

Though some meticulous A4 challengers have tried to prove their authenticity by sticking the paper in their pants, this new challenge remains easily gamed. A cursory scan of some other images shows that by angling the body a little to the side or simply holding the paper further from the body, it's not hard to give the appearance of a paper sized middle. (My waist is slightly more than eight inches wide and I'm wearing a sweater and it took less than a minute for me to replicate the #A4waist on my phone.) Objects are larger than they appear! And just like they have with the underboob, other Instagrammers have lately been putting their own spin on the challenge, posting photos of teddy bears under paper or, as my new hero did, a middle finger flaunting selfie behind a piece of poster board.

Sure, some people are naturally narrow. If that's your build, go forth and rock it. But bragging about it, encouraging others to aspire to it, participating in stuff that promotes the idea that a size that is literally not possible many based on the width of their ribs, that's deeply messed up. And I say we just switch the orientation to horizontal and make this whole thing go away.