Gaffney applauds white supremacists, openly calls for neo-McCarthyism and a new HUAC, and insists Obama is a Muslim 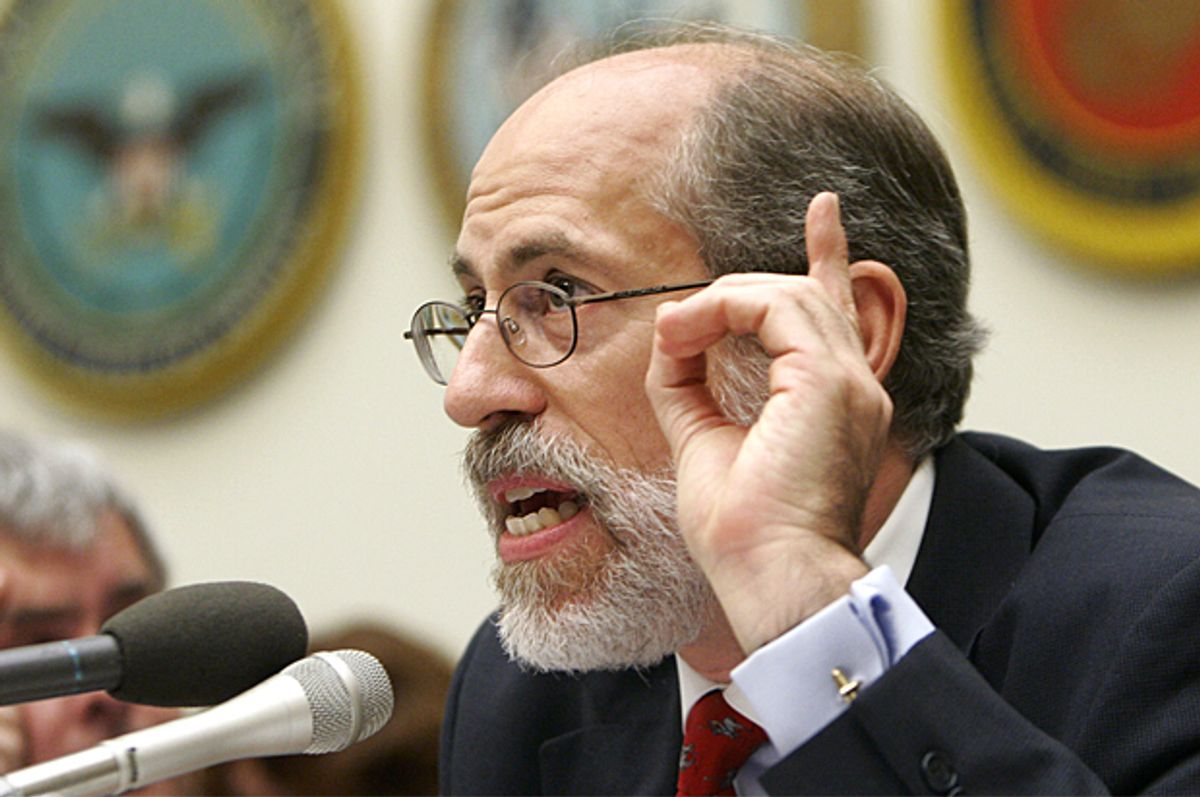 Millions of Americans are horrified by the meteoric rise of leading Republican presidential candidate Donald Trump, and rightfully so. The billionaire real estate mogul is running a fascistic campaign, one based on overtly racist, xenophobic, far-right demagoguery.

Much less discussed, however, is the fact that the runner-up in the GOP primary, Texas Sen. Ted Cruz, shares with the American Mussolini many policies and views that are just as extreme — he is simply a bit more subtle about it (but not much more).

We saw yet another example of this on Thursday, when it was announced that leading Islamophobe Frank Gaffney will be part of Cruz's foreign policy team.

Gaffney is, to put it bluntly, an extremist. The Washington Post has described him as an "anti-Muslim gadfly"; this is an understatement — a huge one.

The Southern Poverty Law Center, or SPLC, the leading monitor of hate groups in the U.S., calls Gaffney "one of America’s most notorious Islamophobes."

A columnist for the right-wing newspaper the Washington Times and a frequent guest on Fox News, as well as a former official in the Reagan administration, Gaffney has spread a number of anti-Muslim conspiracy theories — myths that are eerily reminiscent of anti-Semitic conspiracies in the early 20th century, albeit with Muslims as the new villains.

Despite its extremely dubious credentials and peddling of conspiracies, right-wing news outlets often draw on anti-Muslim research by the Center for Security Policy. In his now infamous speech calling for banning Muslims from entering the U.S., Donald Trump in fact cited a thoroughly debunked study by the organization.

Just how crazy and extreme is Gaffney? Here are five of the most outrageous — and dangerous — things about Ted Cruz's new foreign policy adviser.

1. Applauded a prominent white supremacist on his radio show

"I'm very pleased to have him with us," Gaffney said, introducing the white supremacist leader. The two discussed how Muslim refugees are "invading" the West. Cruz's new foreign policy adviser warned that, "if President Obama has his way," Muslim refugees will flood the U.S. and implement Sharia law.

"He is the editor of a wonderful online publication, American Renaissance," Gaffney said, "and the author of six books, including 'White Identity,'" he added, applauding Taylor. As is evident from the title, "White Identity" is an openly racist book.

The SPLC calls Taylor one of the country's "most outspoken and prominent white nationalists," noting he hosted a conference "where racist intellectuals rub shoulders with Klansmen, neo-Nazis and other white supremacists."

Like Gaffney, Taylor has his own ersatz think tank, called the New Century Foundation, which the SPLC calls "a pseudo-intellectual think tank that promotes 'research' arguing for white superiority."

American Renaissance, the racist magazine that Gaffney spoke so highly of, is "one of the vilest white nationalist publications, often promoting eugenics and blatant anti-black and anti-Latino racists," the SPLC notes.

After Hurricane Katrina pummeled New Orleans in 2005, Taylor wrote, "When blacks are left entirely to their own devices, Western Civilization — any kind of civilization — disappears.'"

"I appreciate tremendously the work you're doing at American Renaissance and The New Century Foundation," Cruz's new foreign policy adviser told Taylor at the end of his show. "Keep it up and get back to us again very soon."

2. Openly called for neo-McCarthyism and a new HUAC

"We need to establish a new and improved counterpart to the Cold War-era's HUAC," or House Un-American Activities Committee," Gaffney insisted in a 2011 op-ed titled "Anti-American activities: A Cold War-style Effort to Root Out Civilizational Jihad."

HUAC persecuted and destroyed the lives of Americans accused of being affiliated with left-wing movements. It was a crucial part of the U.S.'s far-right, totalitarian McCarthyist movement (named after Sen. Joseph McCarthy, who was not involved with HUAC, which took place in the other legislative chamber, but who pursued similar policies in the Senate).

Cruz's new foreign policy adviser wants the new HUAC to be devoted to "examining and rooting out anti-American — and anti-constitutional — activities that constitute an even more insidious peril than those pursued by communist Fifth Columnists 50 years ago."

In the same op-ed calling for a neo-McCarthyism, Gaffney also declared that "the Obama presidency is determined to go to unprecedented lengths to mollify, appease and otherwise pander to what it calls the 'Muslim world.'" (In reality, the Obama administration dropped more than 23,000 bombs on six Muslim-majority countries in 2014, and has recently escalated a new war in Libya.)

3. Insists Obama is secretly a Muslim

"There is mounting evidence that the president not only identifies with Muslims, but actually may still be one himself," Gaffney wrote in a 2009 op-ed in the Washington Times.

His evidence? Obama's father was Muslim; he has said the phrase "holy Quran," not just "Quran"; he uses the word "revealed"; and he claimed he looks forward to the day "when Jerusalem is a secure and lasting home for Jews and Christians and Muslims, and a place for all of the children of Abraham to mingle peacefully."

"No believing Christian" would ever make such a statement about Israel-Palestine, insists Gaffney, who was awarded by the pro-Israel group the Zionist Organization of America for his die-hard defense of Israel.

"The man now happy to have his Islamic-rooted middle name featured prominently has engaged in the most consequential bait-and-switch since Adolf Hitler duped Neville Chamberlain over Czechoslovakia at Munich," he continued in the op-ed.

In another piece in the Washington Times, Gaffney has called into question "whether Mr. Obama is a natural born citizen of the United States," claiming "there is evidence Mr. Obama was born in Kenya rather than, as he claims, Hawaii."

"The radical left, with its activists, contractors, philanthropies and friends in the Obama administration, and Islamic supremacists have joined forces to use U.S. refugee resettlement programs as a prime means to achieve the 'fundamental transformation' of  America," Gaffney insisted in a statement about a report published by his conspiratorial organization in July 2015.

"The Red-Green Axis: Refugees, Immigration and the Agenda to Erase America" (green referring to Islamists and red, of course, referring to leftists), the Center for Security Policy report, claims that "networks of radical left non-profits, foundations, government agencies" and others "are using refugee resettlement as a pretext to import waves of immigrants from third-world nations" in order to destroy the U.S.

The outlandish document maintains that Muslim refugees "are coached by leftist non-profits to capitalize on our generous welfare programs and shown how to maneuver around legal impediments – all at our expense – but are not being taught how to assimilate."

Gaffney's group says this is part of Obama's "'Welcoming America' initiative, which seeks to 'seed' refugees throughout our communities and weed out 'pockets of resistance' with a full-throated effort vilifying anyone opposing his radical agenda."

In the early 20th century, anti-Semites, white supremacists and fascists claimed Jews had infiltrated governments, which they controlled to enslave God-fearing Christians. Although these anti-Semitic conspiracy theories still exist today, many right-wing fanatics like Gaffney have inverted them, replacing Jews with Muslims.

Cruz's new foreign policy adviser joins a slew of right-wing demagogues who claim that all-powerful Muslims are secretly pulling the strings above politicians, controlling governments around the world.

Gaffney says the Muslim Brotherhood has infiltrated every nook and cranny of the world, and of the U.S. government in particular. He constantly accuses President Obama of acting in the interest of the Ikhwan.

One of his accusations — which has been echoed by fellow far-right Republicans, including Rep. Michele Bachmann — is that Hillary Clinton's aid Huma Abedin is secretly working for the Muslim Brotherhood, and has connections to al-Qaeda.

Other far-right websites have propagated this spurious myth.

Yet Gaffney goes even further, insisting that right-wing libertarian and anti-tax activist Grover Norquist has "for years been running influence operations against conservatives on behalf of the Muslim Brotherhood and other Islamist causes."

In response to his baseless allegations, the far-right American Conservative Union banned Gaffney from its Conservative Political Action Conference. This only emboldened the anti-Muslim extremist.

"Using language reminiscent of the Cold War, Gaffney declared, 'An influence operation is contributing materially to the defeat of our country, supporting a stealthy effort to bring Shariah here,'" far-right website WND wrote in 2011.

"Grover Norquist is credentialing the perpetrators of this Muslim Brotherood influence operation," Gaffney insisted, adding, "We are in a war, and he has been working with the enemy for over a decade."

Gaffney's claim is shockingly reminiscent of early Nazi tactics, where Nazi officials would accuse fellow right-wing figures who weren't far enough to the right of working for "the Jews."