The gangster candidate: Donald Trump and his supporters behave like the mafia, with veiled threats and acting above the law

Trump acts like a mobster more than a candidate, by issuing threats and enticing police to act like his muscle 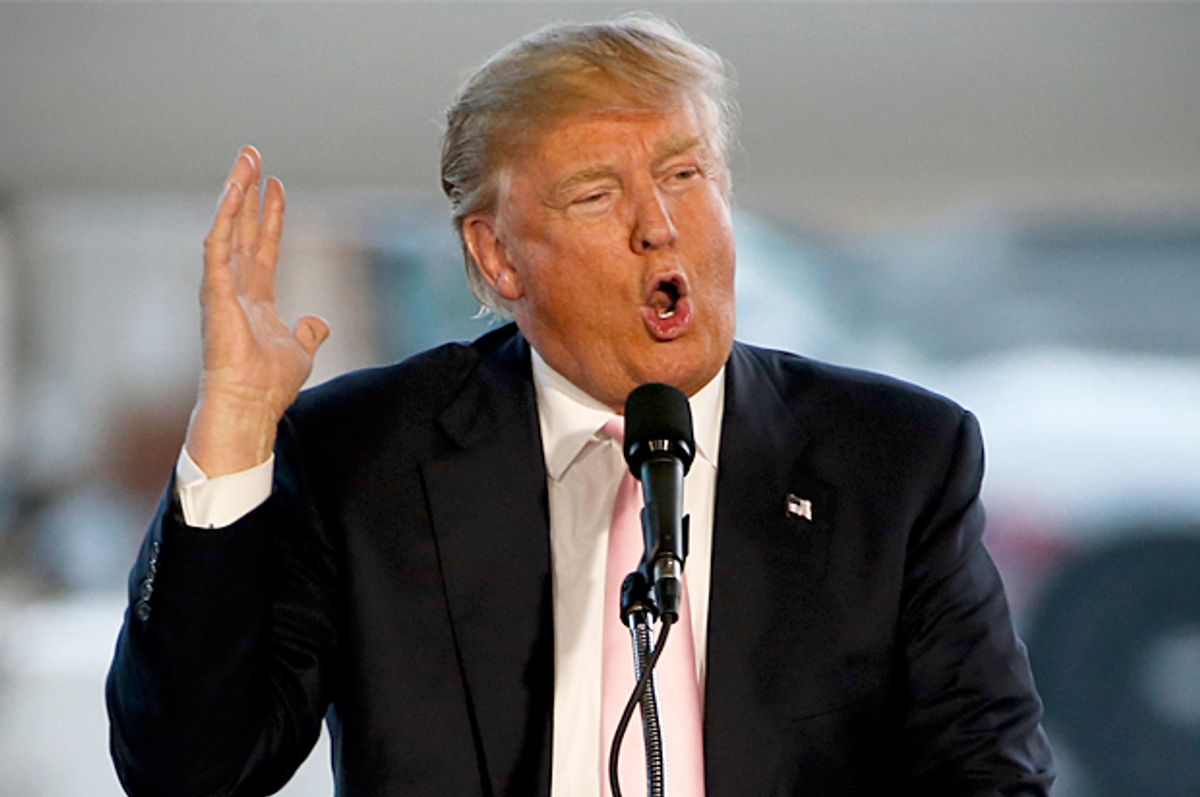 One of the most notable aspects of the authoritarian personality, the kind that tends towards fascism, is for all the fetishizing of "law and order," there is a tendency to think the rules are only for other people, and that you and yours are justified in breaking them. So it is with Donald Trump, who crossed yet another line on Wednesday, in which he leveraged the threat of violence in order to scare Republican leaders away from blocking his nomination at a brokered convention.

“I think we’ll win before getting to the convention, but I can tell you, if we didn’t and if we’re 20 votes short or if we’re 100 short and we’re at 1,100 and somebody else is at 500 or 400, because we’re way ahead of everybody, I don’t think you can say that we don’t get it automatically,” Trump said on CNN. “I think it would be — I think you’d have riots. I think you’d have riots. I’m representing a tremendous, many, many millions of people.”

It's framed as a warning, but make no mistake: This is a threat. This is pure movie mafiosi stuff: Nice convention there. Shame if something happened to it.

Trump's ease in speaking like a gangster issuing veiled threats shouldn't be the biggest surprise. While it's gotten lost in the shuffle of the primaries, there's a long history of allegations against Trump that he has ties to organized crime, hiring mob-controlled companies to build properties like his Trump Plaza condos. A great deal of his history of "deal-making" that he loves to brag about involves dealing with people who have literally been charged, investigated, and convicted of organized crime.

But now that mentality — do what I want, or there will be violent consequences — is being applied to electoral politics. The abuse of protesters, the inciting language, the bullying of the press, and even putting your supporters through humiliating displays of submission? That's some real "Goodfellas" shit, right there.

Which opens up the question of the role that law enforcement plays in this. While Trump usually dances at the edge of the law, violence is, as much as his followers might forget this at times, still illegal. But, as any good gangster knows, if you get the cops on your side, then the law tends to be less of an obstacle than it might otherwise be.

On this front, there are some serious reasons to be concerned. The incident at a North Carolina rally where a Trump supporter sucker punched a non-violent protester has drawn a huge amount of attention, thankfully, but one under-examined aspect is the role the five sheriff's deputies that were leading the protesters played in the whole thing.

Which is a shame, because, as disturbing as it is to see a Trump supporter act out violently against a harmless person, it's even more disturbing that there were five law enforcement officers standing right there who saw an unprovoked assault and did nothing. They simply allowed this flagrant law-breaking, right under their noses, and it's hard to shake the sense that it barely registered as law-breaking because the assailant was a conservative white man and the protester was an anti-Trump black man. Instead, they were so hyper-focused on shutting up the protesters, who were not breaking the law, that they couldn't even be bothered to deal with their first duty to enforce the law.

The sucker-puncher, John McGraw has been arrested and charged. Now the five deputies involved have also been facing consequences: Demotions and a five-day suspension for three of them, and a three-day suspension for the other two. It's a disturbingly light punishment, considering that the incident showcased a clear preference for Trump over his critics, a preference that is interfering with their duty to treat all citizens as equal under the law.

There's also the troubling but strong possibility that even these measly consequences are only happening because the incident was so widely publicized. There's a lot of evidence that law enforcement officers who are working Trump rallies are letting their sympathies for the candidate overwhelm their duty to protect and serve. Or, put less gently, Trump seems to be using law enforcement as muscle.

There have been multiple incidents of journalists covering Trump rallies who have allegedly been bullied and abused by law enforcement even though they were not breaking the law. Photographer Chris Morris said he was choked by a Secret Service officer for trying to leave a media pen at a Virginia rally. (The Secret Service says they are investigating.) CBS news reporter Sopan Deb was detained at the violent Trump rally in Chicago, and charged with resisting arrest, which is what they hit you with when they can't think of an actual crime they were arresting you for. Sun Sentinel journalist Michael Mayo was told he was threatened with jail for standing in a crowd at a Trump rally, even though he'd gotten a ticket to the event like everyone else and was not, by his account, being disruptive.

This is a pattern, and it suggests, unfortunately, that there may be men with badges who are abandoning their legal duties in order to be deputized by the Trump campaign.

There hasn't been any polling of police support for Trump, but one poll of the military, which is a similar career to law enforcement, shows that Trump is the number one pick for that population. While police and military draw from diverse populations, only a fool would deny that these careers are more attractive to people with an authoritarian mindset than you'd find in just a random sampling of people.

That's a problem because, as noted above, authoritarian-minded people often fall into the trap of thinking the rules are only for other people. Take, for instance, the Oath Keepers, an organization formed after the election of Barack Obama. The group is formed around the asinine idea that Obama is going to make them round Americans up into concentration camps and allow a U.N. takeover of the country, and that they have "higher" oaths to keep besides obeying direct orders. But since there's no actual reason to think the president is going to start requiring police to break the law, the real purpose of the Oath Keepers is to nurture the idea that right wing law enforcement officers are justified in putting ideological loyalties ahead of actual duties.

There's reason to worry this mentality is impacting the Trump campaign. We don't need all the cops to be pro-Trump, but if a significant percentage of them put their love of Trump ahead of their duty to treat all citizens equally, that could lead to more violence and even riots, as Trump supporters will feel emboldened to act out violently without fear of consequences. And heaven help us if that becomes a problem at the Republican National Convention.

John Kasich has chosen to speak out against this, calling Trump's threats "unacceptable". There's reason to worry, however, that his words will be filtered through the understanding that he expects to win a brokered convention, which will lead Trump supporters to disregard him. That's the problem with this gangster mentality. Once you cast everyone else as an enemy to be squished instead of another person with rights worth respecting, there's very little that can be done to control what happens next.