The Merrick Garland problem nobody's talking about: Why his nomination creates another major judicial vacancy

It's normal for SCOTUS-nominated judges to recuse themselves from cases. But Garland could be waiting for months 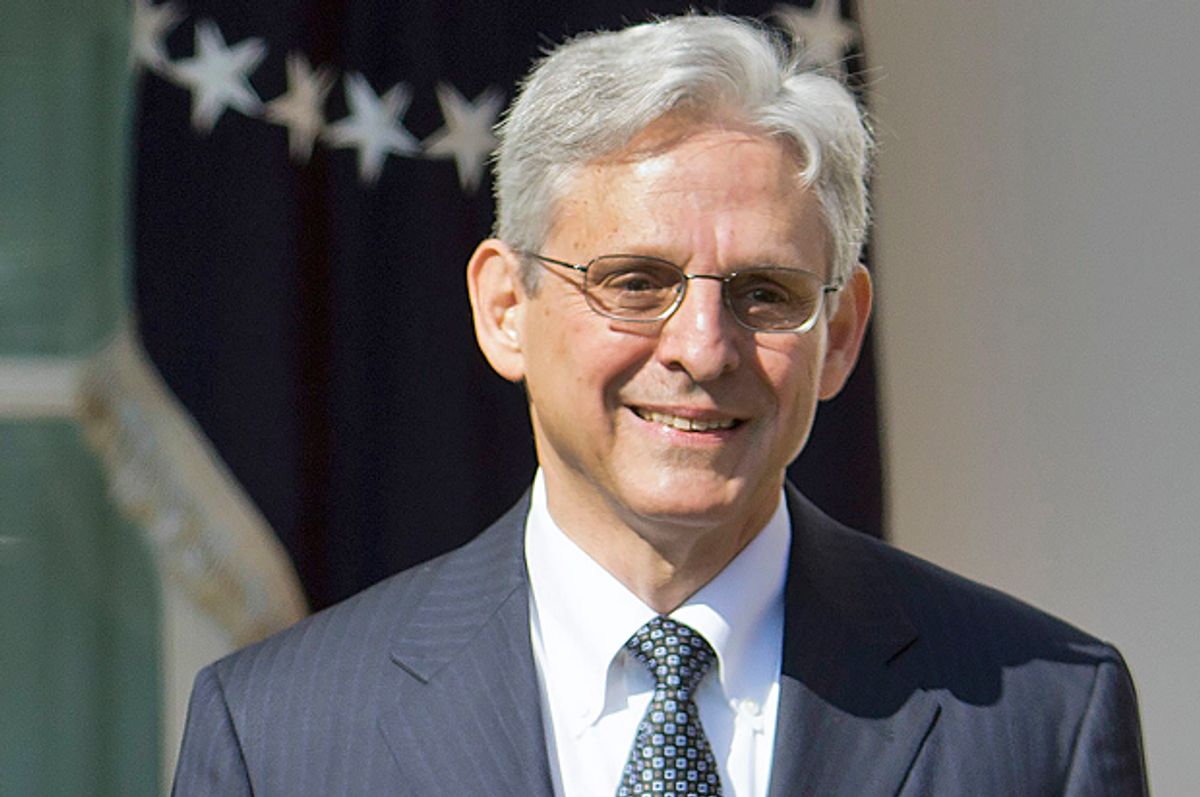 Within days of Antonin Scalia's death, it should have been (in fact, it was) clear that the fight over his replacement would be a bid for lame duck confirmation of a well-liked centrist like Merrick Garland. Within minutes of public reports of Scalia's death, key Republican staffers said an Obama nominee would never get a vote. By the end of the day, Senate Judiciary Committee Chair Chuck Grassley and Senate Majority Leader Mitch McConnell -- the two men who will make or break a nomination in the GOP-led Senate -- issued statements repeating that sentiment.

But those brash assurances can't be -- and shouldn't ever have been -- regarded as entirely serious. After all, the most likely scenario back in February, which is even more likely now, is that Hillary Clinton will beat Donald Trump for the presidency, and Democrats will pick up additional seats in the Senate. Trump's unpopularity, and early Democratic campaigning on his nomination have, if anything, increased the chances the Democrats might win the Senate outright, though that remains a stretch.

If the most likely scenario plays out, then the same Republicans claiming they'd refuse to give an Obama nominee a hearing would face the likelihood that Hillary, as President, would nominate someone far more liberal, with the time and the Senate votes to win confirmation. Faced with such a prospect, Republicans would clearly prefer someone like Garland or Sri Srinivasan, another brilliant but moderate judge Obama reportedly considered, over whomever it is that Hillary would pick. In such a situation, it would be unsurprising to see Republicans rush through confirmation during the lame-duck period between Hillary's victory and her inauguration.

Lo and behold, all of this is precisely what seems to be happening now. Obama on Wednesday nominated Garland, someone the influential SCOTUSblog called "the model, neutral judge" back when Barack Obama first considered him for nomination in 2010.

Obama has picked an incredibly well qualified jurist who won't swing the court left in the same way a Hillary nominee might. Plus, by nominating the 63-year old Garland rather than the 49-year old Srinivasan, Obama presents someone likely to serve just a decade or so on the court rather than twice that, giving Republicans hopes they might get another shot at packing the court with right-wing ideologues sooner rather than later. And by nominating a white man rather than someone, like Srinivasan, who would be the court's first Asian-American, Obama creates less pressure on vulnerable Republicans Senators who will be obstructing this nomination as they try to get re-elected.

Indeed, even before Obama named Garland, Senate Judiciary Committee member Orrin Hatch almost dared Obama to pick a moderate, and named Garland specifically. Then on Wednesday, Nina Totenberg revealed that Republicans sent back channel word to Obama that if Garland were nominated, they would confirm him in lame duck. Curiously, Arizona Sen. Jeff Flake was one of just a handful of Senators who has said he'd meet with Garland. Flake is on the Senate Judiciary Committee and presumably participated in a series of Republican meetings strategizing how to respond to an Obama nominee. Is Flake holding this meeting to initiate an unacknowledged vetting process?

Garland is the nominee the Republicans might prefer. That's not at all to say he's not also Obama's preferred candidate. As noted, Obama has been considering Garland for a Supreme Court seat for 6 years, and Garland is precisely the kind of brilliant moderate Obama might like to leave as his legacy.

So at one level this is an entirely typical nomination, in that everyone agrees Garland is as qualified as any nominee has ever been and is in no way a political radical. But given the Republican promise to obstruct this nomination, it should be treated differently in at least one respect.

It is normal for sitting circuit court judges like Garland to hand off cases during their confirmation, ostensibly to avoid having to recuse on a case that then advances to the Supreme Court, but also to avoid controversial decisions that might turn into a political football during confirmation. Indeed, Garland has already withdrawn from a panel hearing several issues on Thursday, including one reviewing whether the Administration should have to release the Senate torture report in response to an ACLU FOIA request. In this case, withdrawing from the court doesn't make sense, especially not as Democrats pressure Republicans using the slogan, "Do your job."

Republicans insist Garland will be waiting until November at the earliest, already into next year's Supreme Court schedule. Effectively, by withdrawing, Garland simply adds a second 8-month judicial vacancy, in addition to the one Scalia's death created, this time on the nation's second most important court.

And yet, Garland already has such a long tenure on the court, if Republicans could find a political football, it would already exist. In fact, Garland's record on criminal justice issues makes it more likely that Democrats would be the ones finding new reasons to oppose him.

Garland was appointed to key DOJ positions and also his current seat by President Bill Clinton; it's unlikely Hillary would take issue with the nomination. Moreover it's unlikely either Obama or Hillary would abuse Garland's willingness to submit to this nomination by withdrawing it if the chance for someone more liberal presented itself.

Thus, the decision to withdraw from panels seems most likely designed to undercut any basis on which to mount Democratic — not Republican — resistance to confirming Garland, in the event that Republicans do plan to confirm him after the general election in 2016.

So that's where we are: The Republicans are pretending they oppose Garland but will ultimately probably confirm him. And Obama is pretending this is a normal nomination when it is more likely an 8-month holding pattern designed to put this well-loved, but moderate, judge on the nation's highest court even after Democrats improve their chances for a more liberal judge. We should all start acknowledging that's what's going on.