The right's shocking admission: Stunned by Trump's dominance, some GOP pundits concede that Dems have been right about Republicans all along 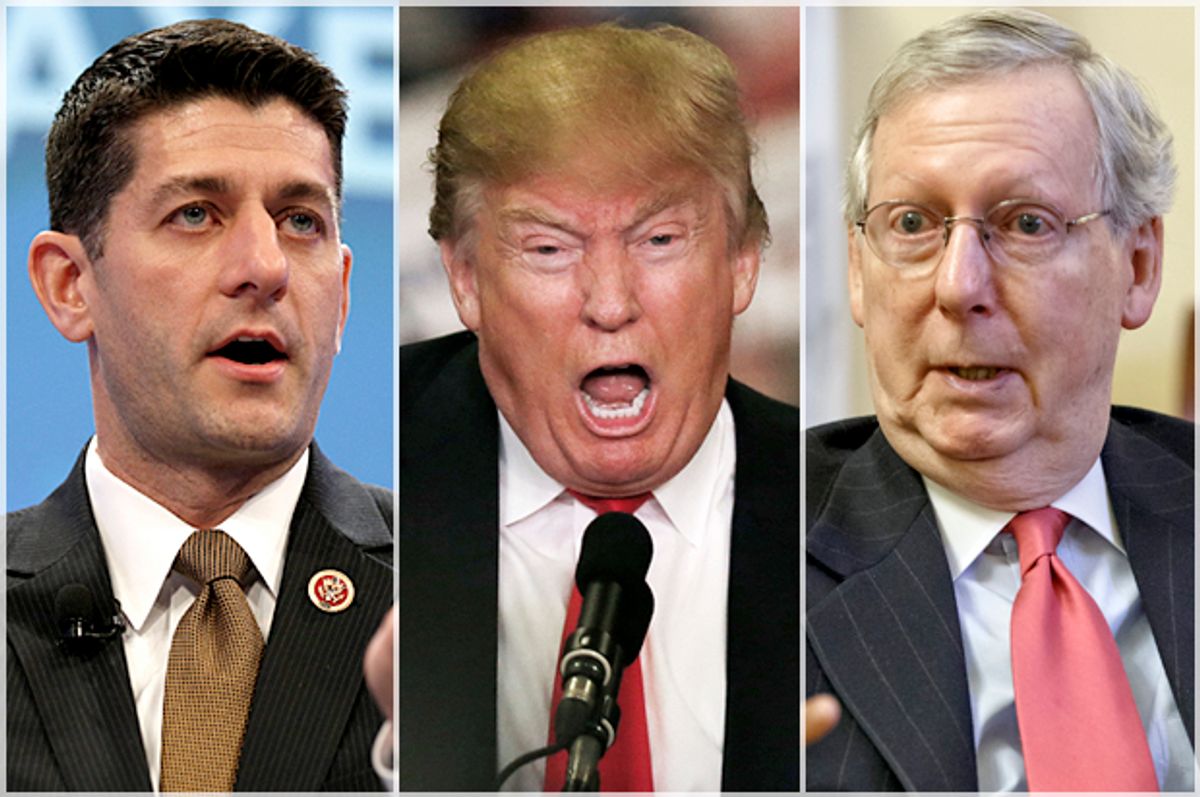 "America's in the middle of a real political storm — a real tsunami — and we should have seen this coming." - Marco Rubio

It was always inevitable, I suppose. The Republican Party has debased itself for decades – courting racists, placating religious lunatics, and using the culture wars as a political wedge. Candidates like Donald Trump and Ted Cruz and Sarah Palin are natural outgrowths of this conservative ecosystem; they're exactly what you'd expect it to produce.

This is the climate Republicans have cultivated, and what we're seeing now is the logical conclusion of those efforts.

The GOP establishment continues to eat itself from within, as officials scramble to make sense of it all. You might call it an identity crisis of sorts. Longtime Republicans are now questioning the party's broader strategy. Here's Bret Stephens, a conservative columnist for the Wall Street Journal:

“Liberals may have been fond of claiming that Republicans were all closet bigots and that tax cuts were a form of racial prejudice, but the accusation rang hollow because the evidence for it was so tendentious. Not anymore. The candidacy of Donald Trump is the open sewer of American conservatism...It would be terrible to think that the left was right about the right all these years.”

Terrible indeed, but no less true. Here's a similar Tweet by Max Boot, a neoconservative hawk and prominent Republican intellectual: “I'm a lifelong Republican but Trump surge proves that every bad Democrats have ever said about GOP is basically true.” Welcome to the club, Max. Happy to have you.

In addition to embracing the worst elements of its base, the GOP also blundered in its strategic decision to cede the business of governing to Democrats and focus instead on obstructing President Obama. “Our top political priority over the next two years,” Republican Senate Majority Leader Mitch McConnell famously said in 2010, “should be to deny President Obama a second term.”

One of the less incoherent objections Trumpites raise against the Republican Party is that it hasn't delivered on any of its promises. Legislatively, the GOP has been virtually useless. Election after election, session after session, Republicans have failed to pass any meaningful pieces of legislation, which is what happens when compromise becomes a heresy in your party.

The GOP's stated strategy – at least since Obama was elected – has been to create gridlock, to make the country ungovernable. Recall how they used the nation's credit rating to blackmail the opposing party, not to accomplish anything but to score points with their purist base. And just this week, we have the nihilsm of a Republican senate, led by McConnell, refusing to do its job and consider President Obama's Supreme Court nomination. The bogus talking point is that the people's voice ought to be heard before choosing a new Justice. But the people already spoke in the last election, when they gave Obama a second term. But that doesn't matter because McConnell is hostage to the Tea Party reactionaries that dominate the Republican-led Congress. This is the kind of bureaucratic inertia Americans are rejecting.

In their bottomless cynicism, Republicans have tried to break the government so that they could then reproach the Democrats for ruining it. This worked temporarily, but it was bound to backfire at some point.

Now something like 87 percent of the country disapproves of the job Congress is doing. Republicans wagered that the country would blame Obama for the mess they manufactured. Instead, their base is – rightly – blaming the GOP establishment, and Donald Trump is delivering the message. Trump voters hate Obama, of course, but not nearly as much as they do their own party.

The GOP committed itself to grievance politics and a strategy of political arson years ago. Had they gone another way, had they been serious about the difficult work of governance, Donald Trump would not have devoured their party this cycle. Once again, he's their Frankenstein, and no one in the party can stop him.

Our only hope is that the Democrats will.