Asian guys get to be sexy, too: Finally, TV gives me the romantic leads I've been waiting for

TV seems to have learned what so many of us have always known—Asian dudes are hot, and they can get the girl 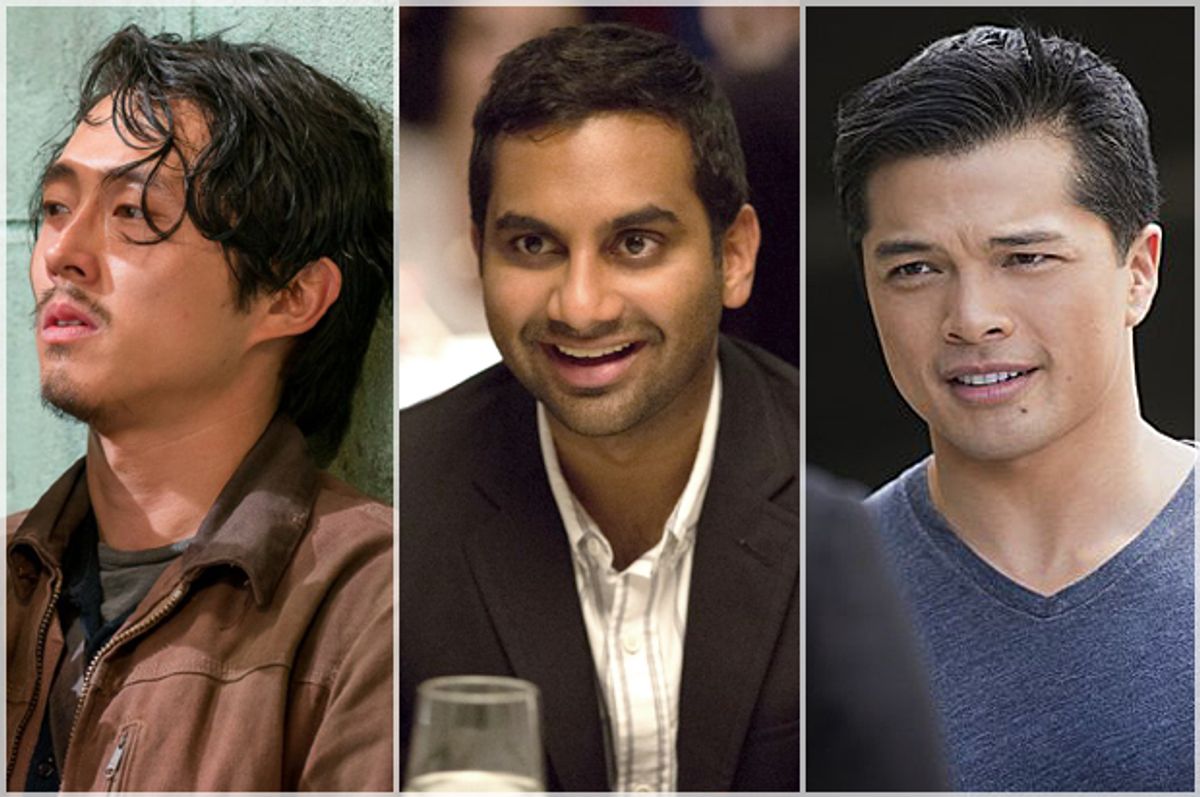 Steven Yeun in "The Walking Dead," Aziz Ansari in "Master of None," Vincent Rodriguez III in "Crazy Ex-Girlfriend" (AMC/Netflix/The CW)
--

Guys, I’m in love with Josh Chan from “Crazy Ex-Girlfriend.” And the most amazing thing is, I’m not the only one.

What’s not to love about him? He’s sweet, funny, has killer boy-band moves, and biceps for days. He’s the kind of guy that you give up a successful career and minimalist-chic apartment in New York City and move 3,000 miles for. At least that’s the conceit of “Crazy Ex-Girlfriend.” And what’s more remarkable is its main character Rebecca Bunch (played by series creator Rachel Bloom), who is a white Jewish lawyer, does it all for an Asian dude.

Television these days seems to finally be learning what I’ve always known (I was raised on Jet Li movies and had an early crush on Shang in “Mulan”): that Asian men are hot. Between Josh Chan (played by Vincent Rodriguez III), Steven Yuen’s Glenn in “The Walking Dead,” and Aziz Ansari’s Dev in “Master of None,” it seems that Asian men on television are finally getting what they’ve been denied in American entertainment for so long: they’re getting laid. And that’s not counting the Asian leading men with wives such as in “Fresh Off the Boat” and “Dr. Ken.”

When John Cho appeared as the male romantic lead in the very short-lived sitcom “Selfie,” in 2014, much was written about what a revolutionary casting move it was. For so long, Asian men have been the asexual sidekick, a comic punching bag who hung out in the sidelines while the lead (usually a white guy) got all the action. Unlike Asian women, who have been objects of desire since the 1800s with "Madama Butterfly," Asian men have rarely been afforded the same treatment. (Not to diminish the fact that the sexual objectification of Asian women continues to be an issue in entertainment, when we’re not being white-washed.)

Even when Asian men were the heroes in an American-made film, they never got the girl (how often did Jet Li or Jackie Chan get laid in their movies?).

But with “Selfie,” here was an Asian man who was a main character, who was on the fast track to romance with the female lead, Karen Gillan’s Eliza, before the show was cancelled. While Cho’s character was revolutionary, he wasn’t an anomaly. Yuen’s Glenn has had a girlfriend on “The Walking Dead” since 2011 (and he was considered by the show’s former executive producer, Glen Mazzara, as “the heart of the show.”)

Cho and Yuen have ushered in the long-awaited era of the multifaceted Asian leading man. After all, Asian men aren't all accountants at PricewaterhouseCoopers (sorry to disappoint, Chris Rock). These men aren’t dweebly, kind of misogynist scientists (I’m looking at you Raj from “Big Bang Theory”), or smartass computer programmers who can write code but can’t read women (“Silicon Valley”’s Dinesh), or whatever the hell Han Lee is in “Two Broke Girls.” And in the case of Rodriguez’s laid-back and unambitious Josh, they aren’t academic overachievers. They’re also not any of the types laid out in E. Alex Jung’s 2014 Vulture analysis of Asian men on television.

What these men have in common is that they are charming, funny, caring, badass, and (this is the most important part) sexy as hell. They’re the heroes in their respective stories (Rebecca in “Crazy Ex-Girlfriend” called Josh her prince last week).

And they’re not afraid to be in-your-face about their sexuality. “Master of None” opened in a way that was a first for American television: it opened on an Asian man having sex. And not awkward, fumbling sex but vigorous, bed-shaking sex that breaks a condom.

That’s not the only action that Ansari’s Dev has on the show. In the episode “The Other Man,” Dev gets to bang a character played by Claire Danes not once, but twice! The episode “Mornings” is equal parts romance, cutesy banter, and sex between him and Noël Wells’s character Rachel. Ansari and show co-creator Alan Yang deserved that Critic’s Choice Award not just because “Master of None” is a genuinely funny portrayal of modern millennial life, but because it dared to show an Asian man being fuckable.

But a man’s sexiness isn’t dependent on how many women he beds. Rodriguez’s Josh is a ladies' man, but he’s also supportive and caring. “Josh represents the kind of undying, unconditional love [Rebecca] never got from her own family,” Rachel Bloom recently told Buzzfeed. In the most recent episode of “Crazy Ex-Girlfriend,” Josh was torn between longtime girlfriend Valencia, a hot and skinny yoga instructor, and Rebecca (who he had just kissed). And he approached the decision in a way that wasn’t stereotypically Asian or macho-male. He did the honorable thing: he came clean with Valencia and has decided to stay with her, despite his growing feelings for Rebecca. Because while he is a bro, he’s not a typical emotionally stunted man who can’t talk about his feelings; he has a good heart and a conscience, and treats the women in his life with honesty and respect.

All of the men mentioned in this article do.

And even though these characters are Asians, it’s a non-issue. Their ethnic identity is touched upon, such as in the “Master of None” episode “Indians on TV” or in the “Crazy Ex-Girlfriend” episode “My First Thanksgiving with Josh!,” as background information. Being Asian doesn’t define who they are or why they’re on the show. In other words, they don’t act in a stereotypical way. There’s no agonizing about loving non-Asian women, no insecurities about their value as a man, no scenes of parents pressuring them to be doctors or lawyers, and no one ever says the word “assimilation” (except on “Fresh Off the Boat,” but that’s what the show is about).

Because in real life, Asian men can be computer programmers, but they can also be easygoing bros or devoted fathers who can give their sons love advice (such as Randall Park’s Louis in “Fresh Off the Boat”). These men have sex and are loved by all kinds of women (and men, too). How else do you explain the collective freakout that occurred in November when it looked like “The Walking Dead” had killed off Glenn?

It’s about time Hollywood realized that Asian men are as worthy of love and respect as any white man.

With the news that “Crazy Ex-Girlfriend” has received a second season, and “Master of None” will no doubt come back for a second season with a new love interest for Dev, there’s no doubt that Asian men will be allowed more humanity on-screen for the foreseeable future.

Diep Tran is an associate editor at American Theatre magazine. Her work has appeared in the New York Times, Time Out New York, and TDF Stages.