Christian right in decline: Religious conservatives have become so belligerent and greedy, people are turning against them 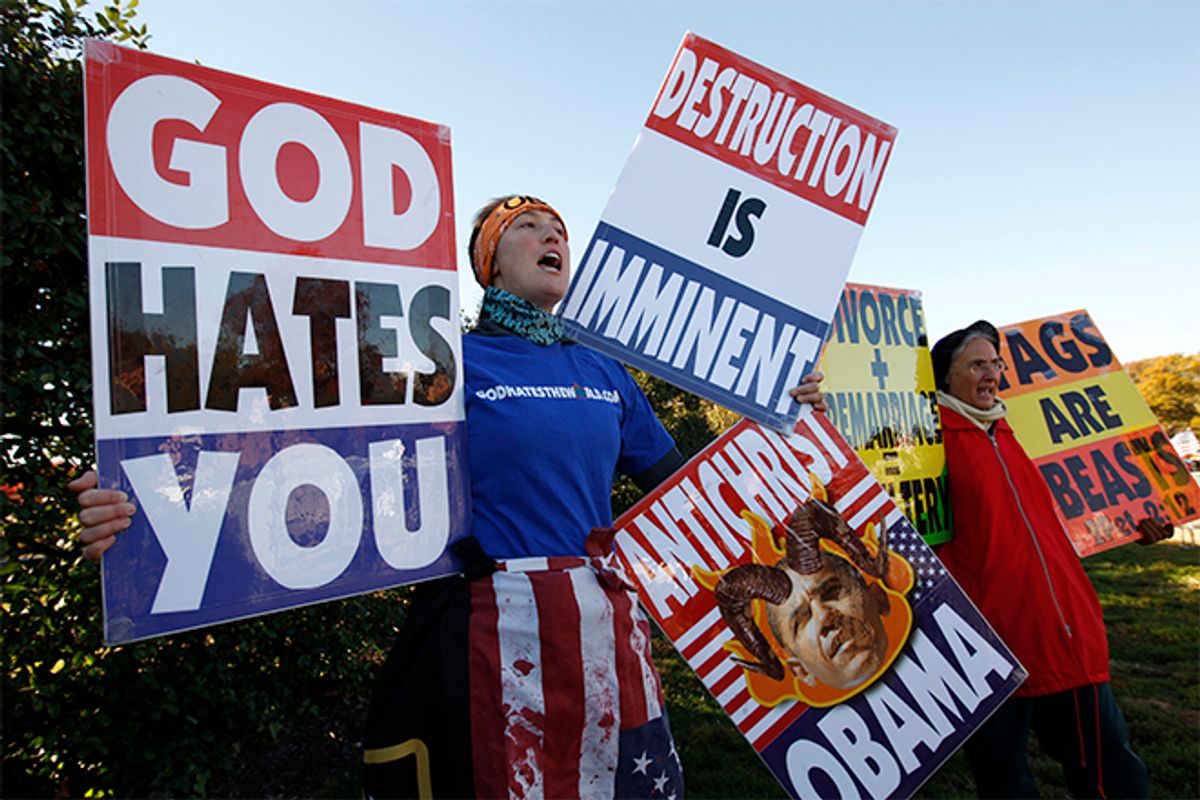 With all the alarming news that comes out on a daily basis, it's hard to believe anything good is happening out there. But there are a few promising signs that one good thing is happening: The religious right really is facing a decline in influence. The story has just a few tendrils and shoots — make no mistake, the religious right is still far too powerful — but there are hopeful signs that they are on the decline. And the best part is they did it to themselves.

Derrick Gordon, a guard for Seton Hall's basketball team, is the first openly gay Division I player in NCAA basketball, and Wednesday he got an unlikely supporter in the form of the usually conservative-leaning New York Post. The Post gave laudatory coverage to Charles Barkley for defending Gordon against homophobic haters.

"I really hate them sumbitches," Barkley told TMZ in an interview about the Westboro Baptist Church, an anti-gay organization that plans to picket one of Seton Hall's games. "Hopefully, somebody will beat the hell out of those Westboro people."

While we here at Salon cannot condone threatening or even wishing violence on people, there is still something heartening about this whole story. Professional and college athletics tend to be the last bastion (besides fundamentalist religion, of course) of this sort of mindless homophobia and sexism. It wasn't that long ago that it was hard to imagine someone in that world not only defending a gay athlete, but doing so swiftly and without any apparent fear of blowback from homophobic fans. But Barkley seems unconcerned about whiny homophobes, saying instead he wishes "the best" for Gordon.

Barkley's right that the Westboro protesters, who picket soldiers' funerals because they are so hungry for attention, are terrible people. Ironically, however, it's this very terribleness that has helped get us to this point where a prominent figure like Barkley can be unequivocal in siding with a gay player like this. Whatever they are trying to accomplish, what the Westboro folks did was publicly and loudly and repeatedly tie anti-gay attitudes to a general hatefulness and disrespect for basic decency.

Most anti-gay conservatives tried to keep their distance, but still, the Westboro people were always there, unvarnished in their loathing, stripping away the religious justifications and posturing to reveal the beating heart of hatred that fuels anti-gay attitudes. They are cartoonishly evil and easy to hate. And their mere existence makes the targets of their hatred — LGBTQ Americans — much easier to sympathize with.

There's been a lot of writing in recent months, spurred by the Donald Trump campaign, about the decline in the power of the religious right. To be clear, the Christian right still basically runs the Republican Party and has been behind a powerful and successful movement to destroy reproductive rights. But now that power is under threat because, seemingly overnight, people have started caring a lot less what the fundamentalists think.

Will Saletan at Slate reported on Tuesday that the Faith Angle Forum, which he has covered for years, was under a cloud of despair this year. "For them, Trump’s support among self-identified evangelicals is an embarrassment and a puzzle," he writes.

They gave him many reasons they hate Trump — supposedly his hatefulness, misogyny, viciousness, etc. — but since those things never bothered them coming from, say, Ted Cruz, the likelier explanation for the anti-Trump sentiment among the movers and shakers of the religious right is that he's just not one of them. He may sign off on the standard-issue Republican opinions on abortion and gay rights, but you get the sense that he doesn't really care and would totally be pro-choice and pro-gay marriage tomorrow if he thought that's what would get him votes. That so many conservatives prefer him to someone who mimics piety more persuasively is a slap to the face. They want fealty from Republican voters, and instead they're getting a "yeah, yeah, abortion this gays that, let's hear more about this wall" reaction.

But the religious right did this to themselves, by getting ever more extreme and power-hungry. No matter how much power they were given, fundamentalists wanted more, making increasingly extravagant demands and throwing fits when they didn't get their way.

Witness what happened in Ohio this week in a little covered but interesting Republican primary for state Legislature. For years, anti-choice activist Janet Porter has been trying to pass a law that would functionally ban most abortions by setting the cut-off date too early in pregnancy for most women to get abortions.

Her efforts have gone nowhere, and not because Republicans in the state have suddenly decided to stop hating women. Outright bans like Porter's are a waste of time, because they are so obviously in violation of Roe v. Wade that they get thrown right out in court. Instead, the current anti-choice strategy is to use feigned concern for women's "safety" to pass a bunch of medically unnecessary restrictions to make offering legal abortion impossible to do. This strategy, under the sexist hand of Gov. John Kasich, has been incredibly effective in wiping out legal abortion in the state, using regulatory schemes to shut down more abortion clinics than any other state but Texas. And all with very little of the backlash that might stop them from quietly disappearing all these clinics until there are none left.

But that wasn't good enough for Porter. Frustrated at her inability to just get her outright ban on the books, Porter primaried Republican state Sen. Larry Obhof, claiming that he and other Republicans weren't doing enough to stop women from getting legal abortions. This was an asinine claim — as he himself noted, Obhof's voting record shows enough loathing for female sexuality to satisfy any misogynist — but Porter was nonetheless able to rack up a murderer's row of endorsements from religious right luminaries, including James Dobson and Mike Huckabee.

In the end, though, putting all that Bible-beating weight behind a candidate for even such a small seat in a state Legislature didn't matter. Obhof won the primary on Tuesday.

To be clear, this shouldn't be treated as some kind of great victory against the religious right, because Obhof is still expected to pay fealty to the sex police as the price of his seat. (Also, I think he wants to.) But the whole debacle shows a slight shift in the power structures on the right. Religious right fanatics don't get everything they want. There is such a thing as going too far. Even conservative Republicans are starting to get a little sick of it.

We'll know for sure this summer how much of a backlash the anti-choice movement has created by going too far. The Supreme Court is supposed to rule on the oppressive Texas law restricting abortion then, and the sense that the right has just taken this too far might compel Justice Anthony Kennedy to rule against Texas, just to put a stop to the nonsense. But as these two stories show, there's already good reason to think the Christian right's hungry power grab and tendencies toward excess are hurting their image. And if you doubt that, ask Kim Davis, the Kentucky clerk who was supposed to be a noble martyr for the cause of Christians who don't want to "participate" in gay marriage, but instead became a laughingstock symbol for hate and bigotry. They may still have the Republican Party, but the religious right is losing the country.