Star power to fight the Flint crisis: Green For All's campaign with Mark Ruffalo and Van Jones to help residents of the suffering city 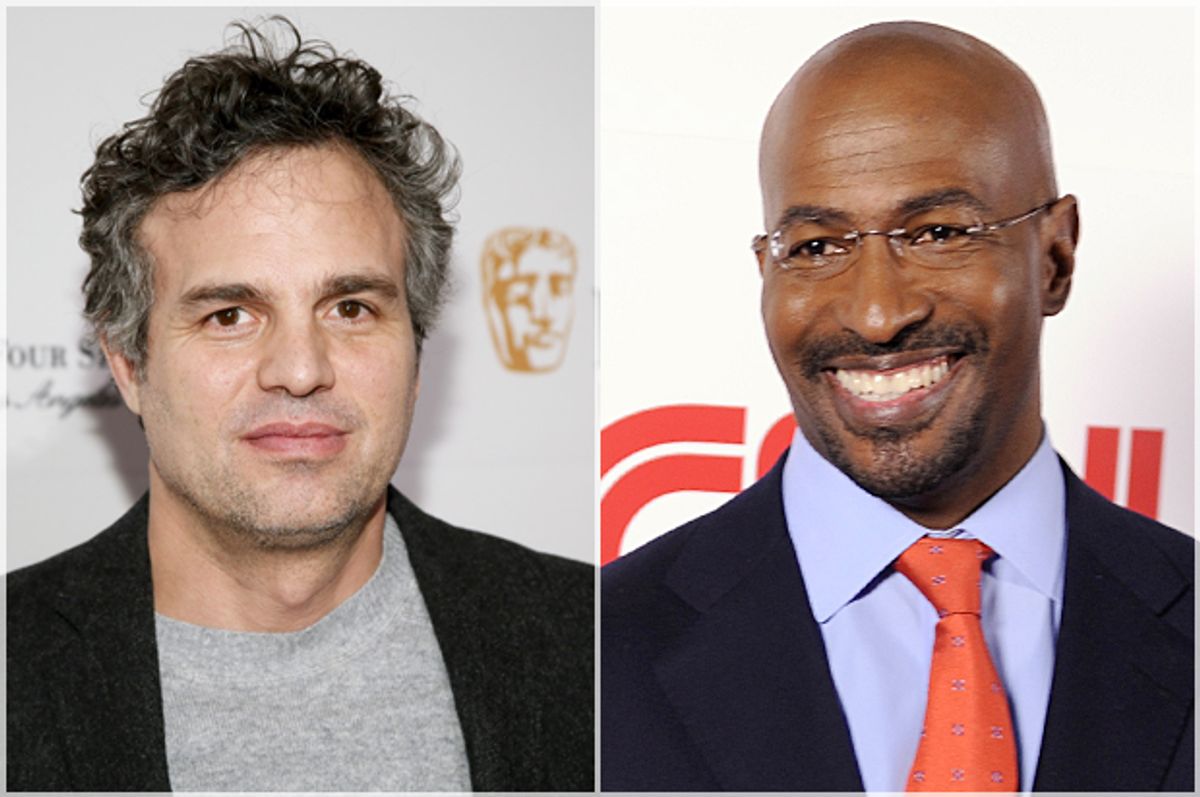 As the initial shock of the lead-poisoning emergency in Flint, Michigan has worn off, media coverage has shifted away from conditions in the city and increasingly focused on contentious and politically charged official hearings. But in Flint, the crisis continues.

Michigan Gov. Rick Snyder testified before the House Committee on Oversight and Government Reform Thursday, calling the drinking water disaster "a failure of government at all levels." Snyder blamed "career bureaucrats" in state and federal agencies for making "terrible decisions that showed a clear lack of common sense." Though Snyder took responsibility for the actions of his own subordinates, his remarks were indicative of the blame game that has emerged in recent weeks as Snyder, Michigan bureaucrats and federal Environmental Protection Agency officials have jockeyed to pin primary responsibility for the debacle upon one another.

Flint's water crisis began April 2014, when the city, then governed by a state-appointed emergency manager, began drawing its drinking water from the Flint River as a cost-cutting measure. Necessary corrosion control procedures were not followed, and the water from the Flint River soon caused widespread lead contamination. Despite being provided with tap water that poisoned their children and caused their hair to fall out, Flint residents paid the highest water bills in the U.S. during this time.

The confluence of race, poverty and environmental issues in Flint attracted the attention of Green For All, a national organization that works with communities of color on issues relating to pollution and sustainability. "For a long time we've seen poverty and pollution treated as such big issues that they should be handled separately," says Green For All Director Vien Truong. "But what we know is that they're so interconnected that neither one can be stopped unless they're done together."

In order to support local activists and draw increased attention to Flint, Truong recently set out on a bus tour of Flint with actor and activist Mark Ruffalo; billionaire environmental activist Tom Steyer; and Green For All founder and CNN commentator Van Jones. In coordination with Flint Rising, a local group, Green For All has now launched a petition calling on Gov. Snyder to replace the city's pipes, refund citizens' water payments and provide residents with health and educational networks.

Salon caught up with Truong to discuss Green For All's efforts and the situation in Michigan.

We met a number of people who were suffering from lead poisoning. We met families whose wealth was completely wiped out. We saw and heard about the 100,000 people getting poisoned from water; 9,000 kids under the age of six exposed to lead, likely to be lead-poisoned, including many that were visiting their families in Flint over the last two years.

What we saw was a representation of what many communities of color face across the country, which is why we're so focused here. Not only is it important for us to address how it affects Flint, but we have to prevent this from happening in other communities.

Who did you hear from on the bus tour?

We had a meeting with Dr. Mona Hanna-Attisha in Flint, one of the local heroes who flagged the issue in the beginning. Then we took our leaders to Flint River to talk about what was happening. We heard from eight families who were talking about how it had impacted them directly, including a woman who had a three-year-old son; she bathed him in the water and his skin started cracking and bleeding within two minutes.

We heard from a mom who was pregnant with twins -- and I myself have twins -- she didn't know the water was poisoned and used it for cooking, washing and baking. She had a miscarriage. After she had the miscarriage was when she got the notice that the water wasn't safe for her to use.

Those are just some of the stories that we began hearing about. Now as we're beginning to see more and more concerns about the other chemicals that may be in the water, including chloroform, we want to make sure that the attention on this is heightened rather than dissipated.

How did Mark Ruffalo and Tom Steyer get involved?

We invited them. One of the things that we knew was happening, was as big an issue as Flint is, many people weren't paying attention and the media around it was beginning to fade. We worried that people would forget about Flint and we wanted to make sure that never happened, so we invited Mark Ruffalo and Tom Steyer to see if they wanted to see firsthand what was happening in Flint. They certainly are important influencers and leaders in this country.

You partnered with Flint Rising, a local coalition, on this project. What was the response of local groups to outside organizations like Green For All coming into the community to help?

When we came in, we wanted to make sure that they knew we were coming in from a point of solidarity, because we, and myself personally, come from communities that are very similar to Flint, economically and racially. We wanted to make sure they knew we were coming in to really support what their efforts were. It's because of that that we support the three demands from Flint Rising, which are to replace all of the pipes and to do it with local labor, to repay the residents for the poisoned water that they had to pay for and to make sure that they have comprehensive and free health and educational networks.

What role does race play in the Flint crisis?

One of the things that we learned early on was that Governor Snyder used the emergency management rule to take over Detroit and Flint. It's not an accident that these two areas are also very high in communities of color. The urgency and the response have been lacking, given the need. If this was anything else, if it was a more affluent community, I think we would expect that the response of the country would be more immediate. There's a billion dollars sitting in the governor's emergency fund, as a rainy day fund, and we would expect that if it was a community that people valued and respected and loved, that the emergency rainy day funds would be used now for this devastation.

We're talking about 100,000 people in Flint who have been poisoned. We're talking about tens of thousands of families whose wealth has been completely lost because their homes are now worth nothing. It costs more to replace the pipes than the house is actually worth. So when this happens, they should be elevated to a point of urgency and the response should be immediate. We've only seen a percentage of the necessary money being put into Flint. It needs to be much higher.

For me, this is a very personal issue. I grew up in a polluted community. One out of four people in my neighborhood in Oakland had asthma. I continue to live in Oakland and raise my kids in Oakland because I know how beautiful and important and lovely the people in the community are, but we haven't seen the regulations and the policies treat us with the same level of respect. They haven't seen us as communities they have to serve.

We see that increasingly communities are being either left behind or polluted or dumped on. These are deeply tied to issues of race and poverty. We want to make sure that we're looking at solutions that not only address the issue of water cleanup and infrastructure, which are important, but we want to make sure that we're also thinking about job creation and how to grow the economy.

How can another Flint be prevented?

We're seeing this in Flint, but major polluters around the country are getting away with polluting our air, our water, our basic human needs, without any regulation, without proper monitoring and without any enforcement around how they're accountable to the communities most directly affected. We're seeing that there are opportunities to do so. There are ways to make polluters accountable and pay for their pollution, and that money should be invested directly back into those communities.

We definitely want to make sure that we're focusing on the long-term solutions that I think that people in Flint want to see. Flint is a story that hundreds of communities have suffered under--an environment of racism and unchecked pollution. We have to pay attention so that we can prevent another Flint from starting at all. We have to make sure we're investing in sustainable and long-term health and prosperity for these communities rather than treating them as dumping grounds for toxic waste.