Stop laughing at Jared Fogle: Prison violence isn't a joke — no matter how reviled the target 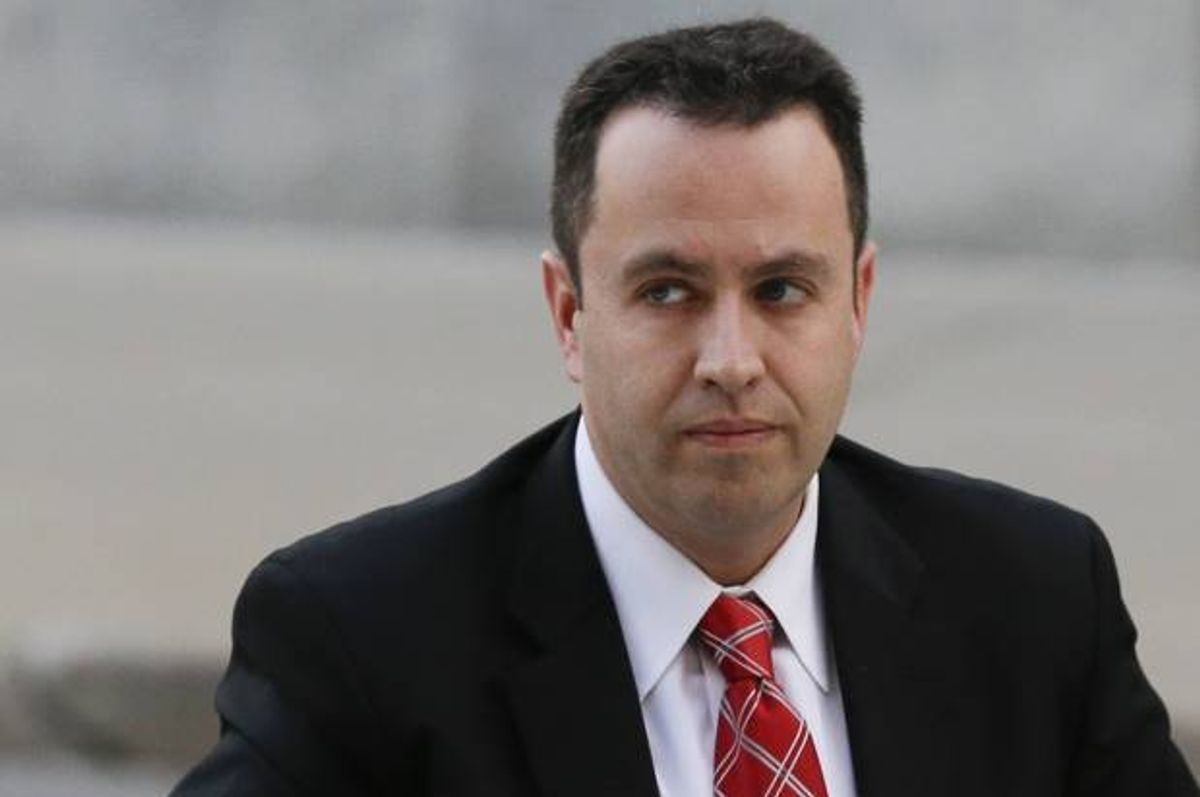 It’s unlikely that you lost sleep over the news that Jared Fogle was beaten in a Colorado prison earlier this week. The former Subway spokesman was sentenced to more than 15 years in the state’s Englewood Prison last November after pleading guilty to the possession of child pornography and soliciting sex with a minor. According to court reports, Fogle paid $100 to have sexual intercourse with a 16-year-old, and in a text to a friend, the 38-year-old described the encounter as “amazing.” He could serve as many as 50 years behind bars.

Since arriving at Englewood, People magazine reports that Jared Fogle has been a “constant target” for abuse, harassment, and now violence. On Wednesday, reports broke that Fogle was “beaten and bloodied” by a fellow inmate, 60-year-old Steven J. Nigg. Nigg’s nephew, Jimmy, told the Arizona Republic, “He could have killed him if he wanted to."

These revelations have been greeted on the Internet with an unrestrained glee, both making light of the assault and seeming to encourage further attacks against the disgraced pitch man. Rapper Charlamagne Tha God told TMZ that Fogle should have been grateful the incident wasn’t worse. “I loved it,” he said. “That’s what happens with pedophiles go to jail: They get beaten up and sometimes they get raped. Unfortunately, he didn’t get raped.” The hip-hop artist added that it “should be a daily thing.” The response on Twitter was more of the same, with added jokes about Fogle’s weight gain.

These comments follow a rash of “footlong jokes” about the possibility of Fogle being sexually assaulted by other inmates following his initial sentencing. To a certain extent, the impulse to laugh about his incarceration is understandable: It feels like punching up at a once-powerful man who was revealed to do horrible, atrocious, unspeakable things and was justifiably punished for it. If you can’t stand the heat on social media, stay out of the kitchen—or rather, teenage girls’ bedrooms.

But while Jared Fogle is a reprehensible scumbag, his treatment on social media is indicative of a society that ceases to treat prisoners like human beings after they are sentenced. Although protection from “cruel and unusual punishment” is allegedly the cornerstone of the U.S. penal codes—a moral law so seemingly inviolable that it’s written into the Bill of Rights—the opposite is true. Our modern prison system is built on cruel and unusual punishment, in which inmates are denied dignity; refused basic necessities like food, reading material, and medical care; experimented on; or even killed. We send the message that their lives no longer matter, so what happens to them behind bars doesn’t either.

No matter what you think you know about life behind bars from shows like Netflix’s “Orange Is the New Black,” the reality is much worse. We have more prisoners locked away than any other country in the world, and in a system that’s based on punishment, not rehabilitation, we continue to create more of them. Inmates in the United States are subjected to some of the harshest and most horrifically inhumane conditions imaginable, thrown into facilities that are underfunded, overcrowded, and falling apart.

Many of these buildings—like California’s infamous San Quentin facility—are very old and no longer fit for occupation by humans. According to the Huffington Post, the prison is “crumbling.” In addition to being a home to the state’s most notorious death-row inmates, it’s also become a safe haven for rodents and disease: “filled with birds, rodents, cockroaches and pools of standing water mixed with worse substances, a result of an inadequate plumbing system.” HuffPost’s Laura Gottesdiener writes, “Keeping the facility even remotely sanitary given the overcrowding is almost impossible.” Other facilities are plagued with broken toilets that don’t flush and showers covered in mold.

These issues have been created by states that have both slashed the amount of funding given to prisons and pushed for privatization. In just one year, 2009, nearly half of all U.S. states dramatically reduced the amount of money allotted to prisons; meanwhile, some facilities have even begun to charge inmates for their own stay, as if prison were the world’s worst hotel. Those housed in Kentucky’s Calloway County Jail may be billed up to $30 each day that they are behind bars. According CNN, the rates at the Robert Presley Detention Center in Riverside, California are even higher: $142.42 per day.

Private prisons further push this bottom line, where facility expenses are reduced at any cost. Sometimes this means cutting education, library books, or rehabilitation programs, while other times it means that prisoners have to go without tampons or toilet paper. As AmericaBlog reports, Connecticut’s York Correctional Facility only “gives bunkmates five pads a week to split, which works out to ten per month per inmate.” This means that women are often forced to reuse the same disgusting, unsanitary pads, which poses a “serious health hazard.”

You might ask why these women don’t simply use toilet paper instead. This is because prisoners are often forced to make impossible choices in environments where toilet paper is severely rationed—if even provided at all. A 2013 lawsuit alleged that inmates at the Kalamazoo County Jail in Michigan were forced to use t-shirts and boxers when prison guard wouldn’t give them toilet paper. Others were told to—literally—take matters into their own hands. “Wipe it with your hands and quit crying,” one guard allegedly said. “It could be worse.” Another added, “Wipe your ass like monkeys do.”

This word choice is not an accident. Since the days of Josef Mengele, prisoners have been used like human lab mice, with the Nazis even using pregnant women and children as test subjects. Mengele was even known to sew newborn twin babies together to conjoin them. Following these rampant human rights abuses, the later Nuremberg Code specifically condemned forced experimentation. The subject must be able to consent under their own free will, meaning that they are “able to exercise free power of choice, without the intervention of any element of force, fraud, deceit, duress, over-reaching or other ulterior form of constraint or coercion.”

Nonetheless, experimenting on prisoners in the U.S. was incredibly common until the 1970s. As Silva J.A. Talvi of In These Times explains, these practices included injecting inmates with “typhoid fever, herpes, malaria, TB and a host of sexually transmitted diseases.” Talvi continues, “In the name of science, doctors have dosed prisoners with LSD, placed them in extreme isolation to develop ‘mind control’ techniques, and... radiated their testicles and then sliced them open.”

These experiments might seem like a relic of the past, but they are not. In 2006, both the  Institute of Medicine (IOM) and USA Today openly condoned using prisoners for medical experimentation; according to the former, it could prove a way to “[improve] the health of prisoners and the conditions in which they live.” As late as 2014, Scientific American boasted that the practice could work with “proper safeguards.” But in a system that already fails to provide routine oversight, normalizing medical testing on prisoners will only lead to further abuses in a system that frequently views inmates as no better than animals.

In 2016, to be a inmate in the U.S. correctional system is to be treated like a dog—or less than a dog. When police animals were killed during the raids following the 2015 terrorist attacks on Paris, the Internet mourned. After Jason Echevarria ingested detergent at New York’s Rikers Island facility, his prison guard left him to die. Echevarria, who was mentally ill, was given the substance by the corrections officer on duty, Terrence Pendergrass, after his cell became “flooded with sewage.” According to Democracy Now, Pendergrass purposefully ignored the situation and told fellow officers that it wasn’t his problem until “there was a dead body.” Also at Rikers, Jerome Murdough was literally cooked to death in 2014 after his cell became too hot.

If Jared Fogle is worried about being a victim of violence, it’s because that violence is built into the prison system, where what seems like extreme cases are depressingly average. Fogel’s story might mean very little to you, but his case represents just one of the millions of prisoners who are routinely abused and tortured while their humanity is ignored. You might think that if he is raped or even killed that he is getting what’s coming to him, but did Jason Echevarria or Jerome Murdough? If you have to wonder why it was so easy for Echevarria’s guard to cover his ears as he screamed for help, it’s because he didn’t think the man in front of him was worth saving.

Prisoners' lives matter, even when your name is Jared Fogle.