The president's nomination of an alleged moderate has some liberals scratching their heads. They shouldn't 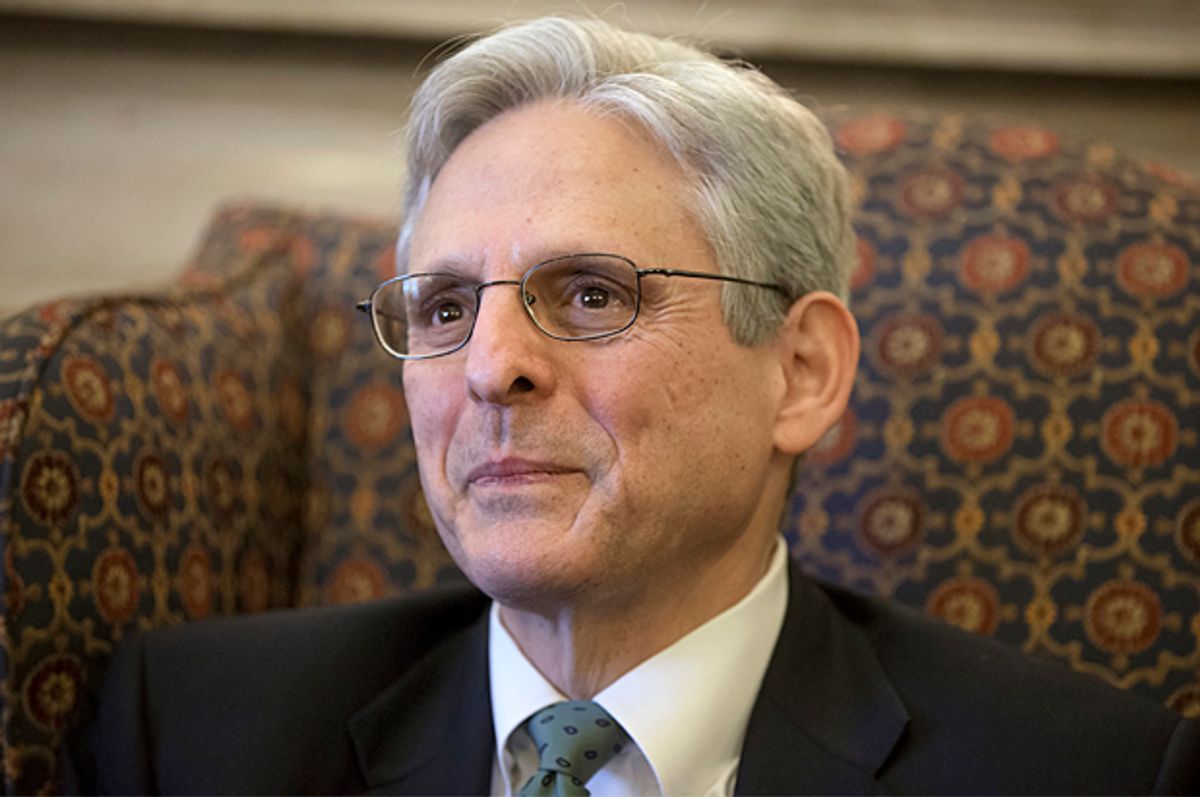 The first and most important thing to say about President Obama’s nomination of Merrick Garland to the Supreme Court is that it might not work.

Not in the sense that Garland won’t receive the Republican-controlled Senate’s approval — that goes without saying, at least until November — but in the sense that Obama’s “Godfather” move might not be the political checkmate that the White House hopes it will be.

It’s possible that less-engaged #NeverTrump Republicans, right-leaning independents, and establishment media centrist pundits will see the GOP’s refusal to even go through the motions with Garland as yet more proof that the party is unserious. And it’s possible that they’ll be so disgusted with Republican obstructionism that they’ll either vote for Hillary Clinton or skip 2016 altogether. That could happen, for sure.

But it’s just as likely that the political ramifications of Garland’s snubbing will be minimal, and that the president’s efforts to cast himself as The Only Adult in the Room will, once again, fail for succeeding. He and his proxy, Hillary Clinton, will be seen as stolid and reasonable — and as a result they’ll gain roughly zero votes that they didn’t have already. This could be a lesser repeat of the Grand Bargain fiasco of 2011, it’s true.

Either way, though, it would be a mistake to interpret the president’s nominating Garland — rather than a more unapologetically liberal or demographically atypical candidate — as a sign that Obama still can’t recognize the GOP’s bad faith. He recognizes it plenty. It’s the main reason, in fact, that Obama is trying to camouflage his offer as an open hand when it’s really more of an iron fist.

“Iron fist” is a bit much, I admit. Even at his most ruthless, that’s not really Obama’s style. As a former National Security Council official once said, the president is a “gambler”; and like any good gambler, he prefers to make bets that are as close as possible to a win-win. Garland fits that mold, because even if Republicans do accept Obama’s offer, Garland still propels the median vote of the Supreme Court well to the left of where it was just a few months ago.

But if Senate Republicans still refuse to even hold hearings for Garland, much less give him an up-or-down vote, then the steeliness that undergirds Obama’s plan will start to become more obvious. According to the New York Times, for example, the White House has reassembled much of the team that helped Obama win in 2008 and 2012. And they’re planning one last national campaign to punish GOP intransigence.

The Times piece is vague with regard to how hard-hitting this mini-campaign will be, but there’s no doubt that a significant portion of its funding, at the very least, will be devoted to attacking Republicans. If Obama’s speech announcing Garland’s nomination is anything to go by, it doesn’t seem like all of those attacks will be from the left, either. And this is where Garland’s reputation for “moderation” comes in handy.

For instance, take a look at this section of the speech, which you could easily imagine coming from a Republican president in defense of a conservative nominee:

[Garland’s] sterling record as a prosecutor led him to the Justice Department, where he oversaw some of the most significant prosecutions in the 1990s, including overseeing every aspect of the federal response to the Oklahoma City bombing. In the aftermath of that act of terror, when 168 people, many of them small children, were murdered, Merrick had one evening to say goodbye to his own young daughters before he boarded a plane to Oklahoma City, and he would remain there for weeks. He worked side by side with first responders, rescue workers, local and federal law enforcement. He led the investigation and supervised the prosecution that brought Timothy McVeigh to justice.

But perhaps most important is the way he did it. Throughout the process, Merrick took pains to do everything by the book. When people offered to turn over evidence voluntarily, he refused, taking the harder route of obtaining the proper subpoenas instead, because Merrick would take no chances that someone who murdered innocent Americans might go free on a technicality.

Such “law and order” rhetoric makes lefties nervous (MSNBC’s Chris Hayes described it as “reactionary garbage”); but it makes conservatives — the smart ones, at least — downright scared. Why? Not just because they think it’ll make stopping Garland harder, but because they know a wedge issue when they see one. And they know that Obama will answer their obstruction by driving that wedge as deep into the GOP coalition as he can.

In this scenario, it’s hard to see how Obama loses. If ratcheting up the pressure causes the GOP to cry uncle, then Garland ends up on the Supreme Court, giving liberals the majority for the first time in a generation. And if that pressure isn’t enough to get Garland a vote, it’s still going to cause the GOP even more internal strife than it’s experiencing already — which makes a Clinton victory more likely, too.

And if Clinton wins, then Obama has a few options. He can try to get Garland confirmed in a “lame-duck” session; or he can punish Republicans even further, as many liberals will no doubt advocate, by withdrawing Garland and letting Clinton pick an even more liberal nominee herself. Either way, the Supreme Court just got a lot more liberal; and the Republican Party just got a lot more demoralized and divided.

As noted in the beginning of the piece, it’s eminently possible that this doesn’t work. Republicans may prove just smart enough to take what Obama’s giving. But even if that happens, it wouldn’t change the subtly ruthless nature of the president’s gambit. You may disagree with the strategy — you may prefer firing up liberals to splitting Republicans — but there should be no question that Obama knows what he’s doing.