This drug now rivals heroin as a killer, and the drug war is to blame 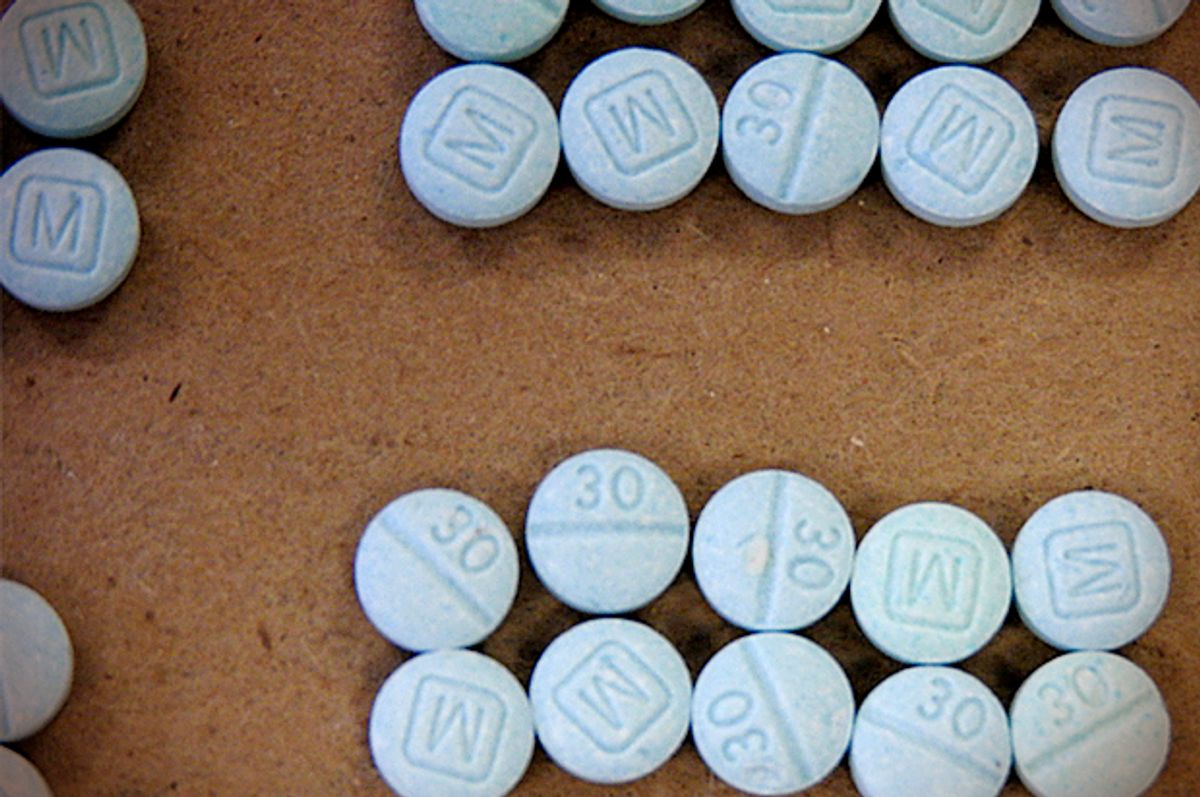 A surge of overdose deaths that swept through Chicago, Philadelphia and Detroit a decade ago came to an abrupt halt after Mexican agents raided a clandestine laboratory outside the capital that allegedly produced huge quantities of an extremely powerful opioid called fentanyl. The potent drug, pharmaceutically used for pain relief, had infected the United States’ heroin supply. Just one bust appeared to have a major impact.

Now, amid an unprecedented opioid crisis, fentanyl has begun to rival heroin as a cause of overdose deaths. And it doesn’t appear as though shutting down a single laboratory will help. Not only is fentanyl being produced in Mexico but that an analog called acetyl fentanyl is made in China, according to the Drug Enforcement Administration. Traffickers are mixing illicitly manufactured fentanyl (IMF), which experts say is between 20 and 100 times stronger than heroin, with heroin, or substituting it for heroin and prescription opioids entirely, often without users’ knowledge. The result, especially for people who think they are taking a less potent opioid, can be deadly, depressing users’ respiratory system in minutes.

It’s a public health crisis that law enforcement can’t control. Indeed, the drug war, by forcing addicts onto the street to get a fix, has created it.

“Significant increases in fentanyl seizures and fentanyl deaths first became evident in 2013, and continued to increase throughout 2014,” emails Centers for Disease Control and Prevention researcher Jon Zibbell. “The vast majority of IMF is being mixed with heroin to increase its potency and sold as heroin. State level and national data indicate that persons dying from fentanyl are predominately heroin users and are being exposed to fentanyl by its presence in heroin that is cut with fentanyl—most often without the heroin user being aware.”

The CDC has not yet released 2015 overdose death figures, and many coroners and crime labs still don’t routinely test for fentanyl specifically, according to the DEA.

Fentanyl is booming because it’s cheaper and stronger, says Daniel Raymond, policy director at the Harm Reduction Coalition, the same factors that pushed users of prescription opioids like Oxycontin to switch over to heroin in recent years. In the case of fentanyl, however, it is drug traffickers and not users who are making the switch, seeking to increase profits, decreasing the likelihood of detection by law enforcement and, perhaps, gaining a competitive advantage for selling the strongest stuff.

“There was this target market that was looking to get high off of opioids, and heroin could provide a cheaper and more potent high,” says Raymond. Today, dealers in heroin, which is already often cut with inert substances, might jump at an opportunity to save money on heroin while increasing rather than decreasing their product’s potency. “How do you differentiate your product? It’s not like you can advertise; it’s not like you can offer a Groupon…The market structure rewards more potent forms.”

While some fentanyl users may be seeking out a more potent drug intentionally, it appears that many don’t know what they’re taking. A recent study from the British Columbia Centre for Disease Control found that 73 percent of participants who tested positive for fentanyl had not reported using fentanyl over the previous three days. Even more concerning was evidence suggesting that fentanyl may have entered the supply of purported stimulants like crystal meth and cocaine, says Ashraf Amlani, a harm reduction epidemiologist at BCCDC. Unknowingly taking fentanyl is dangerous enough for heroin users who do not anticipate the increased potency.

“And so it hits them even harder,” says Amlani, “than if they had a little bit of tolerance to opioids.”

Drug prohibition has not only failed to keep users away from drugs but has fostered the rise of more harmful drugs, becoming a major if indirect cause of drug user deaths. The best way to save lives, according to harm reduction advocates and experts, is to prioritize keeping heroin users safe, which means providing users with safe places to inject—and even supplying addicts with a safe and pharmaceutical-quality supply. It’s a problem not of an illicit drug, per se, but rather a problem of an illicit drug’s adulteration.

“The solution to a drug contaminating your illegal drug supply is to make a legal drug supply and regulate it,” says Dr. Mark Lysyshyn, a medical health officer at Vancouver Coastal Health.

The situation, pragmatically speaking, is clear: If the more than 250 people who died last year in New Hampshire from fentanyl-related overdoses had been able to access pharmaceutical-grade heroin and inject it in a clinical environment, there is a significant likelihood that many would be alive today.

Supplying heroin users with a place to use heroin, or even providing them with heroin, may sound ludicrous. But so have other proven harm reduction measures like needle exchanges, and the government could very well make it work like it does in other countries like Switzerland and Germany. In Canada, a first-in-North America research trial showed that heroin-assisted treatment improves participants’ mental and physical health and their commitment to treatment while decreasing their likelihood to commit crimes to pay for their habit.

British Columbia is home to the only supervised injection sites in North America, with medical professionals on hand with the overdose-reversing drug naloxone at the ready. No one has ever fatally overdosed at Vancouver’s Insite facility, the only such licensed center before a second one was approved in January. A 2011 study in the Lancet found that overdose deaths near the facility decreased dramatically after its opening. But fentanyl-related overdose deaths in the province, which rose to an estimated 31 percent of total overdose deaths last year from just 5 percent in 2012, are still at crisis proportions. Having naloxone on hand is particularly important in the case of fentanyl overdoses, which may require more than one dose to reverse.

In the United States, reforms are unsurprisingly moving more slowly—a slowness that costs human lives every day. Last month, Ithaca, New York, Mayor Svante Myrick proposed opening a supervised injection site that could run afoul of state and federal law. In Boston, the Globe has editorialized in favor of such a site. In Maryland, Delegate Dan Morhaim recently introduced legislation to decriminalize drug possession, and also to create supervised injection sites and access to pharmaceutical heroin for hard-to-treat addicts.

“After 50 years, I look at the war on drugs as a policy failure; not one data point is in a positive direction," says Morhaim, an emergency room physician and faculty member at the the John Hopkins Bloomberg School of Public Health. "Crime is not less. Substance abuse is not less...These bills are methodologies that may seem radical to some. They seem more common sense to me.”

While the opioid crisis has prompted policymakers to rethink criminalizing drug use, the radical, drug-war-ending changes necessary to confront this disaster still remain unthinkable to many. But as overdoses mount, more people will likely wake up to a harm reduction mantra: you can't seek treatment if you're dead.